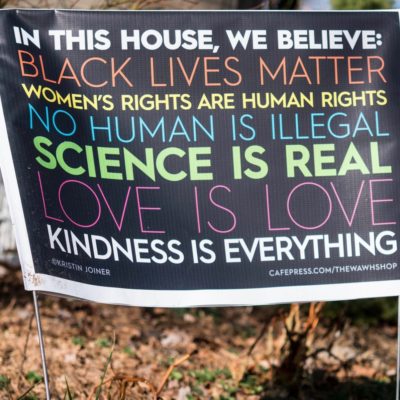 This past weekend, my dear husband arranged for a little family getaway to an island here in Washington State. It was a weekend full of relaxation, fun and platitudes.

Allow me to explain. It all started when the Bernie Sanders supporters were seated next to us in their t-shirts. We snickered as we silently observed that most of them were retirees and residents of the island. Most of them have no doubt, worked hard to be able to afford their island lifestyle. And, in this great country we live in, they have every right to slap that Bernie sticker on their Subaru-right next to the sticker that says, “In My America, All Are Welcome”.

We toasted to first class air travel as they were exiting the restaurant. And while our trip was fun, I began to get a bit fatigued at the subliminal virtue-signaling that is more apparent than we like to give credit for in these quaint little island towns. The gay pride flag took the place of the American flag on President’s Day weekend. And I saw my fair share of variations on the sign of all signs. You know the one:

In this house, we believe:
Black Lives Matter
Women’s Rights Are Human Rights
No Human Is Illegal
Science Is Real
Love Is Love
Kindness Is Everything-Kristin Joiner

The graphic artist who created this movement? Ironic as all get-out, she lives an island. Bermuda, specifically. I saw tons of platitudes on my chosen Isle of Woke this past weekend. But honestly, if we look at some of these empty statements, do affluent white people who live on an island really feel this way? Or are these platitudes just more sanctimonious drivel from the left that they have been conditioned to believe? Let’s dissect them one by one, shall we? In this house, we believe…

Black lives matter. Just black lives. Their white kids’ lives that they’re bankrolling for that philosophy degree? Poor, white, inner-city children? Nah. Their Asian neighbor down the street (and the one token Asian on the island)? Not so much. The Native Americans who settled the area many, many moons before they built their home overlooking the Haro Strait? Negative. Black lives matter. Oh, look at the rich white people in the waterfront home! They are so welcoming and diverse because they like African Americans! They like them so much that they want to let them know that they are welcome in their cute little trinket shop. Isn’t that special? Is it me or is this condescending to African Americans? What about black unborn babies? Which brings me to the next platitude on the list…

Well, duh. Last I checked women are human. That has been the case since humans evolved. Again, does this mantra apply to unborn human (to-be) women with heartbeats? Just wondering. And while we are on the subject of humans…

No Human Is Illegal

Nope. We’re all granted the right to live and breathe on this Earth. Last I checked, existing is not illegal. What is illegal? Stealing. Raping, murdering. Entering a country and not going through the proper channels of citizenship while others work hard and do so legitimately. This falls under the category of that ridiculous bumper sticker I saw, “In My America, Everyone is Welcome”. Really? Are they welcome in your house? Don’t tell me, old man in the Bernie shirt, that you are ready to sponsor a ferry ride for some MS-13 gang-bangers so you can have them over for a nice dinner because we know THAT ain’t happening!

This has got to be the most favorite of mine when we talk the platitudes of the woke. It’s as if to say…”we, the smart people, believe in science.” This is also a veiled remark at Christians and evolution of the universe, don’t kid yourself. This is not a dig at Muslims or Buddhists or any other faith. Those belief systems actually believe in science but according to some of the left-thinking, Christians think science is unnecessary and irrelevant. (Psst…some of us Christians know science is real. Shhh…don’t tell the masses.) After all, there is a very REAL science to the chromosomes XX and XY to determine a gender as definitively female or male. Yes, science is real. No $hit, Sherlock.

The next two go hand-in-hand…

Love Is Love and Kindness Is Everything.

Yep. Kindness is everything. This Kindness Is Everything bit only applies to those in “the tribe”. There’s a lot of preaching about showing more love and kindness but very little of this is directed at those with opposing views. The last platitude should read something like Kindness is Everything…except to those who voted for Trump. Show more love…except to those who voted for Trump. Instead of following the golden rule and treating others with kindness regardless of their political ideology and belief systems, we have a group of individuals who close themselves off to opposing viewpoints, who attack people and subsequently block people who were former friends on social media because of political ties. Truth be told, these people have colossal stones to say some of the things that they do. Have you seen them on social media much? They hurl insults they would never have the guts to throw if they were face to face with a person. We even have schools celebrating “Kindness Weeks” while teachers post hateful, divisive political rhetoric (complete with f-bombs) on their social media pages. They insult the very parents of a child who may be in their classrooms and this is okay. This behavior is somehow acceptable on their island of kindness.

As you can see, the platitudes associated with the attitudes don’t always jive. But my question is this. Do you really need a sign to tell someone what kinds of humans lie within? No longer do people put out the “Welcome” mat and invite people to “Gather” but they’ll gladly plop a lawn sign with platitudes in their yard. It has become a passive-aggressive way of saying, “I’m a Democrat and I am not open to any other perspectives or arguments no matter educated or rational. I am superior and if you disagree with any of the statements on my lawn sign, you’re a miserable human being…end of story.” People are not the diverse masses these folks claim to embrace. They are reduced to political ideologies. After all, it’s easy to cast your gaze down on the masses and tell everyone how much better off you are-politically, intellectually, morally and socially. All you have to do is stick a sign in your shop window or yard and stay in your island bubble.