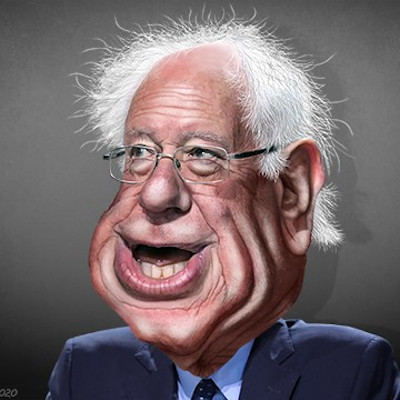 The Democrats’ senior socialist, Bernie Sanders, did his best impression of Charles Durning’s “Governor” in The Best Little Whorehouse in Texas. He did a little song and dance and managed to avoid giving direct questions more than once during the Q&A session. Two of those questions, and his refusal to fully answer, say a great deal about the man and the politician.

When asked “whether he would accept hundreds of millions of dollars in help from Michael Bloomberg if the Vermont senator becomes the Democratic nominee”, Sanders did not answer. The question every Democratic and undecided voter should ask themselves is why? Why wouldn’t Sanders answer the question? The implication is clear. He didn’t answer because then he would have to say “yes” and that would go against his campaign ads where he touts how his campaign is one of the “people”, paid for by “the people”. Taking millions in campaign donations from a billionaire isn’t exactly the image most good socialists want to paint for the unsuspecting public.

Then there was the question about his supporters who have been cyber bullies in his name. Instead of taking a strong stand and making clear he would not allow such persons to be involved with his campaign, he did his song and dance. He pulled one of his patented non-response responses:

I do not believe in online bullying,” he said. “End of discussion.”

Wow, way to reassure potential voters that you will make sure the cyber bullying doesn’t happen again, Bern. Perhaps it is time we start asking if you approve of their actions and that’s why you wouldn’t give a more detailed response to the question. Hmm, inquiring minds want to know.

The town hall meeting is illuminating where Sanders is concerned, if you take time to really pay attention to what he says and how he says it. It is past time the so-called moderates of the Democratic Party, not to mention the undecided voters, took a hard look at Sanders and realized he wants to change the party not to the Democratic Socialists but to the Socialists. That can’t be allowed to happen.

Then we have Mayor Pete. He had a bit of a minor win yesterday. The recanvass of the “targeted precincts” in Iowa have him holding “less than a hundredth of a percentage point” lead over Sanders. Mind you, that’s a decrease in his lead but he still leads. Where he faltered was in his backhanded insults of Christians who support President Trump during the town hall.

The question presented to Buttigieg was this: “To the point you talk about God not belonging to any kind of a political party … Do you think it is impossible to be a Christian and support President Trump?”

Now, that’s a loaded question, almost as loaded as “Do you still beat your wife?”. But Buttigieg wasn’t deterred. He took the opportunity to answer and, in doing so, made it clear what he thinks of Christians who have the audacity to support the current Commander-in-Chief.

And how did Mayor Pete respond:

Well, I’m not going to tell other Christians how to be Christians, but I will say [that] I cannot find any compatibility between the way this president conducts himself and anything that I find in Scripture,” Buttigieg said, to which the audience applauded.

A couple of things about his response. First, for someone who isn’t going to tell other Christians how to be Christians, he pretty much does. Or at least he makes it clear he doesn’t believe a good Christian could back Trump. Perhaps he should consider the proverb about those who live in glass houses not throwing stones. No one is perfect. Most politicians, despite their protestations to the contrary, are less perfect than the average person. The fact good ole Mayor Pete could say what he did with a straight face simply proves it.

Wow, way to go there, Mayor Pete. It was an attempted save but, in baseball terms, you attempted to bunt but didn’t pull your swing and wound up striking out. You voiced your opinion and, in doing so, you insulted how many tens of thousands of Christians in the process?

Oh, and Mayor Pete, what about the complaint filed alleging you “improperly coordinated with VoteVets, a super PAC” regarding ads in Nevada?

And now we come to Amy Klobuchar. Trying to build on her strong performance at the last debate, Klobuchar did her best to paint herself as not just the woman but the candidate who would beat Donald Trump in November. Taking a jab at Sanders (at least that’s who I assumed was her target), Klobuchar not only reminded everyone that Hillary Clinton won the popular vote in 2016, proving the country is ready for a female president, she went on to explain how she was the first woman to hold two of her earlier jobs. But, as she reminded everyone, she is the woman who will beat the President.

That was probably one of her better moments last night. Let’s face it. One thing she’s good at is selling herself. But, when she falters, the veneer cracks a little–or a lot–and the excuses begin. Which is what happened during the town hall when she was asked why she couldn’t remember the name of Mexico’s president during an appearance last week. Her excuse? Basically, it came down to “I was tired”.

When that happened, for what it’s worth, I had been in the Senate all day. We had six votes, including a resolution to be a check on the president,” Klobuchar said. “And I got on a plane and got there at midnight my time and had a fast interview and two forums after that, I think ending at about 2:00 or 3:00 in the morning. Such is life.”

Wow, she can remember what she did that day but she couldn’t be bothered to remember the name of the leader of the country that borders ours to the south. We shouldn’t worry about that at all, right?

Wrong. As much as I hate to agree with Buttigieg about anything, he was right when he knocked her on her failure to be able to name President Andres Manuel Lopez Obrador. It showed a lack of preparation and a lack of knowledge. I would expect a U. S. Senator to at least know the names of the leaders of the two countries that border our nation.

And what about Bloomberg and all the money the Dems hope he will throw into the coffers even if he doesn’t win the election? As noted above, Sanders wouldn’t answer whether or not he’d take funds from the billionaire should he–Sanders–win the nomination. Buttigieg was more honest and admitted he would. In fact, he answered “Sure!” with something akin to glee. Klobuchar’s response? I’ll be honest. I was zoning out about then, so I’m not sure if she was asked the question and if she answered. However, she did say she was glad Bloomie was going to be allowed to take part in the next debate. After all, we don’t want someone buying the election without the public having the right to hear from him.

I have to wonder if she was making a slam at the man’s wealth while still trying to play nice just in case he wins the nomination and is looking for a VP.

And let’s not forget the other clowns still trying for the Democratic nomination. They might not have been part of the town halls last night, but they still made the news. Poor Lizzie Warren just can’t help herself. Whether she’s talking about her ancestry or any of the other disputed–and disproven–assertions she’s made these last few months or something else, she always finds a way to put her foot in it.

Elizabeth Warren addresses the Culinary Workers Union in LV and says: The White House is a mess and “when you’ve got a mess and you really need it cleaned up, you call a woman and get the job done.” pic.twitter.com/auidrcSBa8

Sexist much? At least it would be if a man said it. But Lizzie? Why she’s trying for gurl power and failing badly. Not that it should surprise any of us. She has become a pale imitation of the candidate she was just a few months ago. It’s time for her to step back but she won’t. Not yet, at any rate. She’s not about to let that upstart Amy be the woman to get the nomination.

Then we have Mike Bloomberg. As our own Jodi Giddings wrote yesterday morning, Bloomie is the master of the insult, intended or not. Now, adding further insult to injury for so many of his potential voting pool, we learn he “chided” the Democratic Party for focusing on certain social issues. Part of that chiding included the following:

If your conversation during a presidential election is about some guy wearing a dress and whether ‘he,’ ‘she,’ or ‘it’ can go to the locker room with their daughter, that’s not a winning formula for most people.”

Wow. And the Democratic Party condemns Trump for being crude, rude and socially unacceptable. Yet they are standing by, hoping he is the one to take down Sanders in the primary because they don’t have confidence in Buttigieg or any of the other candidates. Not only is the comment ill-conceived but it is ill-informed. That is an issue, an important one, for a large number of people in this country right now. But that’s for another post.

These clowns are the so-called best the Democrats have to offer. It would be easy to discount them and allow ourselves to become complacent. We can’t. That is the road to defeat. They have already lessened our freedoms and limited our constitutionally guaranteed rights. Do not let them continue their assault on our country, our freedoms and our lives.

Instead, hold the door to the clown car for them and send the Democratic candidates on their way, preferably to some destination far from government office.