Next post
FISA Veto Threat is Good for Liberty 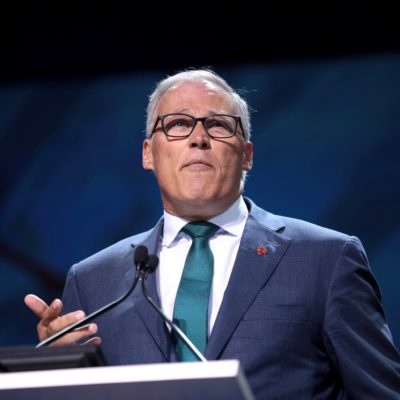 Washington Governor, Jay Inslee, is enjoying his role as dictator. As incompetent and as much as he looks like a deer-in-headlights when explaining his “plan” and “phases” to reopen, the governor is reveling in this power surge and it is wrecking lives and businesses across the state.

Inslee the Incompetent discussed opening the state of Washington in phases in a “plan” backed by “data” and “science” of which he provided none. Only dials of the “phases” as he anticipated them. All Inslee keeps doing is moving the goal posts for these counties-as seen in the snippet above. Conveniently, Thurston country, where the capitol resides, will be making preparations with the hopes of jumping to Phase 2 this week. Meanwhile, counties in Washington that are opening, as the media reports, are concerned with the amount of residents from other counties flocking to theirs to patronize their businesses and services, hence overcrowding and fear of an uptick in COVID-19 cases. So much for the “science” of social distancing here. The two most populated counties in the state are still not out of Phase 1 as predicted by Der Fuher himself and probably will not be for God only knows how long.

To rub more salt into the wounds of already afflicted businesses, The Department of Labor and Industries, at the request of the Incompetent Jay Inslee, created and enacted a set of emergency rules that give the department the authority to cite places that aren’t following the established guidelines.

Businesses found to be in violation will be informed by the department and ordered to adjust or close immediately. If they do not comply with that order, they will be issued a workplace safety citation that carries a fine of nearly $10,000 or more.

The department will also conduct in-person inspections of some businesses in addition to contacting them via writing or phone call.”-Mack Ervin III-The News Tribune

So, in addition to individual residents and other businesses ratting on their competitors, our great governor of Washington state has now involved Labor and Industries.

We’re all in this together, and most businesses are doing the right thing for our state and our communities. Unfortunately, there are some that are choosing not to. The coronavirus is a known workplace hazard and businesses must follow the requirements to keep their workers and the public safe.”- Labor and Industries Director Joel Sacks

No, Joel. We’re NOT “all in this together”. Note, this decision comes after the negligent and incompetent governor and commissioner of the state Employment Security Department, Suzi LeVine, lost hundreds of millions of taxpayer dollars in a Nigerian unemployment scam. Need to recoup some of those funds lost, Jay? Tax those business owners who are already hurting and slap a fine of at least $10,000 bucks on them. Way to kick someone when they’re down! Stand-up leadership at its best right there!

Jay Inslee will continue to deflect his glaring, incompetent decisions. In an interview this past weekend, Inslee, in short, shamed Washingtonians in an argument he seemingly had only with himself during an interview with reporter Brandi Kruse. Inslee claimed that Washingtonians who are either too eager to open their businesses or too eager to support these businesses want to leave grandma and grandpa on a “deserted island”. In fact, he is the self-proclaimed hero in fighting for the senior citizens of our state. That explains so much why construction projects in the state were halted. Including construction projects on new, much-needed, assisted-living facilities. In fact, there was one being built right down the street from me. Opening this facility has been delayed because of COVID-19 lockdowns. So much for trying to provide social distance by relieving the burden of overcrowded assisted-living facilities in the state, Jay. That also explains why homeless, drug-addled criminals are released from county jails to only harm elderly residents once they’re sprung. Yeah, you really care, Jay. You care a lot.

Over the past few days, I have seen friends go from excitedly getting close to opening their businesses, to having to go back on social media and tell their loyal patrons that they will not be able to do so. When will they open? Nobody knows-including the imbecile in charge. And now, they can’t even begin to think about defying the orders without the looming thoughts of fines they already cannot afford or permanent shut-downs.

Of course individuals are going to flock to open counties for services if businesses remain closed in their respective county. Of course these businesses may be a bit crowded. The impending fear of COVID-19 “spread” could be mitigated by safe and gradual reopening across the board in every county so that more people have more options of places to visit. Thus, spreading out. By saying this, I know I have already vilified myself with the sheeple who think I am selfish, unkind and uncaring because I am concerned for our state’s economic future and I want commerce to resume. They will call me uneducated and stupid because I don’t believe that cartoon drawings of dials represent science and data. The point here is this-our governor is a self-centered, incompetent FOOL who is using the smokescreen of “data” and “science” and guilt and ultimately, FEAR to exercise and abuse power. I can hope this changes and some people in our state will wake up and take notice in November but I don’t have a lot of faith. Why? Because the most populated side of the state, in the wealthiest counties and zip codes of western Washington, agree with Inslee, the incompetent incumbent. For the record, Jay, we don’t want to shove grandma and grandpa on a deserted island and “forget about them” as you claim but can we just shove your supporters on an island somewhere where they can live out their masked-utopia, socialist fantasies while we get on with our lives?