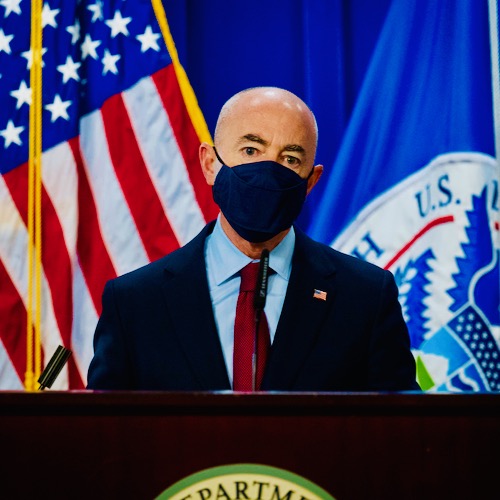 “The homeland security secretary, Alejandro Mayorkas, took to the political talk show circuit on Sunday to press the administration’s case that it is doing all it can. He continued to refer to the problem as a “challenge” not a “crisis”, attempting to put blame squarely on the previous incumbent of the White House, Donald Trump.

“It is taking time and it is difficult because the entire system was dismantled by the prior administration,” Mayorkas told CNN’s State of the Union. “There was a system in place that was torn down by the Trump administration.””

Lovely. That’s the narrative they’ve put in place and will hammer down with all their might. Everything that goes wrong for the Biden Administration now and in perpetuity will always be President Trump’s fault.

Is it really President Trump’s fault that Biden, throughout his entire campaign, promised everyone showing up at the border would be let into the United States no questions asked? No.

Is it really President Trump’s fault that the Biden Administration has now reopened ALL of the child facilities for nearly 16,000 children along with now housing 3,000 14-18 year olds at the Dallas Convention Center? No.

Is it truly President Trump’s fault that our Customs and Border Protection officers and staff are so overwhelmed that they are facing having to let illegals out into the United States WITHOUT getting tested for Covid let alone any other disease?? Absolutely NOT.

It isn’t President Trump’s choice to let illegals into the U.S. without scheduled court dates or zero means of tracking them.

“Fox News has learned from a senior source with Customs and Border Protection (CBP) that a plan is under consideration for Border Patrol agents in the Rio Grande Valley Sector (RGV) to begin releasing illegal border crossers who claim asylum without issuing a Notice to Appear (NTA) – meaning they will depart custody without a court date.

Such a decision would be unprecedented if enacted and would place the responsibility of seeking an asylum hearing on the migrants through Immigrations and Customs Enforcement (ICE) or legal assistance.

The source says the reasoning for the decision is that the situation has “become so dire that BP [Border Patrol] has no choice but to release people nearly immediately after apprehension because there is no space to hold people even to do necessary NTA paperwork.””

Rational, clear headed people will understand what happens next. Of those released, it’s a fair bet that 95% or more will disappear into the U.S., will not do the NTA paperwork, nor ever show up at any CBP facility ever again, unless they are caught in an illegal immigration sweep.

If it is closed and secure, then how come ICE has now booked a significant number of hotel rooms, for at least SIX MONTHS or more, along the border to house illegals? Again, Mayorkas, that is NOT the fault of President Trump.

DHS Secretary Mayorkas is doing his best to keep a media and political blackout of the border crisis going. His excuse is that COVID is so dangerous, no outsiders can be let into any facility. OH? But it’s perfectly fine to decide to let people go without testing them? It’s perfectly fine to ship them into hotel rooms, convention centers, and facilities on the northern border? But don’t you DARE let anyone from the media step into a facility, the COVID will get us all!

What an utterly asinine excuse for YOUR incompetent leadership and that of Basement Biden!

That’s ok though, they will release footage that shows how great and wonderful things are. Let’s hope those editing that footage are paid very very well for those gaslighting videos.

I spoke to @MarthaRaddatz @ThisWeekABC about the surge of illegal immigration and humanitarian crisis 1/ pic.twitter.com/o6wxF3Drce

The perception among migrants is that US borders are open, asylum policies have changed & now is the time to head north

This administration must act now & deter individuals from making this dangerous journey 3/3 pic.twitter.com/AhOn7IQHj4

We were just in Phoenix visiting family. People there are SERIOUSLY worried about what is going on. Do they blame President Trump? NO. Not one single person we spoke to blames him. Also, they are very well aware that the Remain in Mexico policy was working, but once Biden removed it…all bets were off.

Migrant from Guatemala with 10-year old son to ABC's Martha Raddatz: "Biden promised that we could cross with minors."

Raddatz: "She said she heard that because of President Biden, she would be welcome."

I’m impressed that Raddatz and ABC actually aired that, along with an interview with another illegal immigrant who freely admitted that he wouldn’t be where he was if President Trump was still in office. Yet, given DHS Secretary Mayorkas’ stance on the Sunday morning talk shows, he’ll try to pivot to blaming President Trump somehow.

The responsibility for the current border crisis rests SOLEY in the hands of Joe Biden and his Administration. They blew the doors off our immigration policies, which has quickly set in motion a health, humanitarian, and economic crisis of their OWN making. Blaming President Trump won’t change any of that.