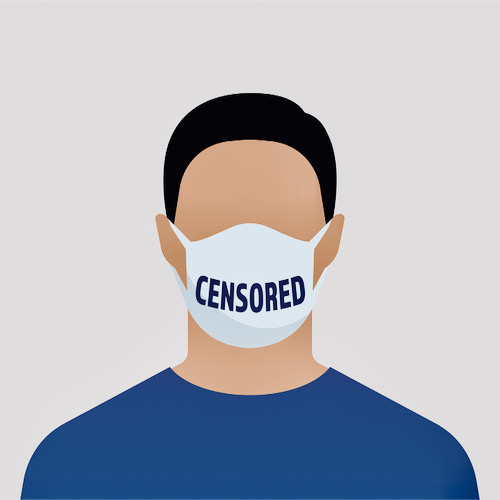 Censorship. The Biden Administration admitted this afternoon that they are actively engaged in censoring anything that fits THEIR definition of COVID misinformation.

Remember when I wrote the other day about their idea of going after people’s text messages? Guess what folks, that wasn’t an idea. It’s something they’ve put into action.

President Biden’s surgeon general on Thursday used his first formal advisory to the United States to deliver a broadside against tech and social media companies, which he accused of not doing enough to stop the spread of dangerous health misinformation — especially about Covid-19.

Fauci told us last year masks weren’t needed. Fauci and others have also worked hard to tell us that the virus didn’t come from a lab leak. However, just a few weeks ago, it became public that YES, the virus came from a lab leak. Given what the Biden Administration is now doing, Fauci himself should be flagged for peddling misinformation.

This is so dystopian, so Orwellian. Highest levels of government telling us what's misinformation, and how they're going to combat it "for our safety," or whatever. https://t.co/eZKQptOF8j

It’s incredibly Orwellian and it is ABSOLUTELY contrary to the freedoms we have in this Republic! I am so incredibly angry right now about this.

There have been SO many flip flops by government officials since February 2020 it’s unreal. Yet the Biden Administration is going to engage in full on censorship because Americans aren’t allowed to be SKEPTICAL?

There are CREDIBLE news reports of reactions to the vaccines. Johnson & Johnson is now putting a major disclaimer on their vaccine because of people getting Guillain Barre’ syndrome. Yet, if anyone expresses concern about that or any other reactions, the government will censor us? Will flag any social media posts about questions and concerns because it’s “misinformation?”

We are already seeing any Facebook post mentioning the virus, such as someone talking about a loved on who got vaccinated but is now battling health issues with a variant getting flagged. Heck, even obituaries that mention the virus are getting flagged on Facebook!

Here’s what Jen Psaki had to say about this.

In addition to that jaw dropping statement, she said the following:

“1) That they measure and publicly share the impact of misinformation on their platform. Facebook should provide publicly and transparently data on the reach of COVID-19, COVID vaccine misinformation. Not just engagement, but the reach of the misinformation and the audience that it’s reaching. That will make sure we’re getting accurate information to people. This should be provided not just to researchers but to the public so that public knows and understands what is accurate and inaccurate.

“2) We have recommended, proposed, that they create a robust and enforcement strategy that bridges their properties and provides transparency about the rules. So… there’s about 12 people who are producing 65 percent of anti-vaccination misinformation on social media platforms. All of them remain active on Facebook despite some even being banned on other platforms, including ones that Facebook owns.

“3) It’s important to take faster action against harmful posts. As you all know, information travels quite quickly on social media platforms. Sometimes it’s not accurate, and Facebook needs to move more quickly to remove harmful, violative posts, posts that are within their policies for removal often remain up for days. That’s too long. The information spreads to quickly.

She said that Facebook “certainly understands what our asks are.”

That wasn’t an “Ask,” that was an order.

Remember when we were told it was a giant conspiracy and there was nothing to see when the NY Post was censored over the Hunter Biden laptop story? Remember when all the media and leftist politicians along with spineless Republicans told us that private companies such as Twitter and Facebook can engage in censorship because they are…private companies?

Now we have a detailed admission that OUR GOVERNMENT is engaged in censorship for the greater good. Guess what? Censorship benefits nobody and harms all.

The Biden administration is telling Facebook which posts it regards as "problematic" so that Facebook can remove them.

This is the union of corporate and state power — one of the classic hallmarks of fascism — that the people who spent 5 years babbling about fascism support. https://t.co/U2Ee3DgXJe

This tweet thread is worth reading in its entirety. A couple of highlights.

evaluate our human rights record.
4. The media is pumping Steele Dossier Part Deux Pee Tape Boogaloo like we are going to buy it
5. We see the Chair of the Joint Chiefs is a politicized hack who is completely off the rails.
6. The Press Secretary just told us the Biden /2

me, the Cuban protestors waving the American flag have a better idea of the American IDEA than anyone governing us does anymore.

And they might not want to come here anymore. We have the internet, but it is being censored. We have elections but Tech overlords /4

If ANYONE is ok with this, then YOU are part of the problem.

The Biden Administration has now admitted those freedoms don’t matter. And you can damned well bet that it isn’t just Covid virus vaccine info they are scrutinizing. They’ve opened the door to fascism and are running full tilt down the road with scissors in hand.

You know what is the biggest public health threat? CENSORSHIP.

This needs to stop NOW before we lose our Republic.