Next post
Abortion Radicals Agitate While Waiting For SCOTUS 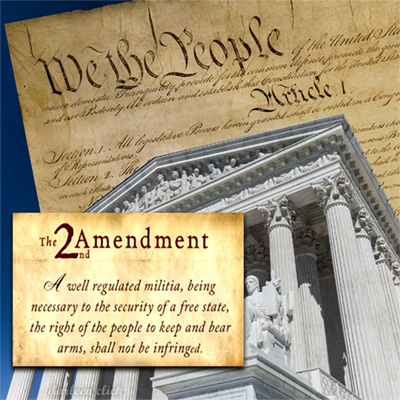 A win for the 2nd Amendment and our Constitutional rights. That was the 6-3 decision made by the Supreme Court this morning.

The Supreme Court has ruled that New York’s concealed carry statute that requires an individual to establish “proper cause” in order to obtain a license violates the Constitution by preventing law-abiding citizens with ordinary self-defense needs from exercising their Second Amendment right to keep and bear arms in public for self-defense.

New York courts defined “proper cause” to require applicants to show a “special need” to defend themselves and not just wanted to protect themselves.

The plaintiffs claimed that the Second Amendment gives people the right to bear arms.

In other words, in New York state, if one wanted to conceal carry a handgun, that person had to jump through hoops to PROVE they needed to carry in order to defend themselves. And, many times, New York would still refuse the applications. Which goes directly against our Constitutional rights.

Needless to say, all the usual suspects (Democrats all) are very displeased with this decision.

A former solicitor general to the United States is hoping we don’t know that abortion is not a Constitutional right, but our right to keep and bear arms IS.

Eric Adams is busily at work, not keeping his city safe from the rampant crime, but figuring out a workaround to this ruling that a future SCOTUS court won’t strike down.

We have been preparing for this decision and will continue to do everything possible to work with our federal, state, and local partners to protect our city. https://t.co/rLvU0gs6zi

I just had to include Keith Olbermann’s commentary because he’s such a Constitutional scholar and all.

It has become necessary to dissolve the Supreme Court of the United States.

The first step is for a state the "court" has now forced guns upon, to ignore this ruling.

Great. You're a court? Why and how do think you can enforce your rulings?#IgnoreTheCourt

This is a win for our 2nd Amendment rights and the weird dissent from Justice Breyer combined with the opinions by Justices Thomas and Alito show us why.

“Many states have tried to address some of the dangers of gun violence… by passing laws that limit, in various ways, who may purchase, carry, or use firearms of different kinds. The Court today severely burdens States’ efforts to do so.” He went on to list pages and pages of statistics on gun violence.

That’s the thing. The gaslighting spin is now that law-abiding citizens will suddenly MAGICALLY become criminals as soon as they get their grubby hands on a handgun.

Chanelle Anderson, a 33-year-old violence “interrupter” who works with the nonprofit BronxConnect to intervene in potential conflicts, said that greater access to guns would likely increase the number of shootings and the number of people sent to jail or prison.

“If they legalize firearms, that’s making it easier to destroy our communities even more,” she said.

Mr. Aborn said he was hoping that Mr. Adams and the five city district attorneys stress to the public, should there be changes to the law, that background checks and licenses would still be required to acquire guns.

“People are going to misinterpret whatever the decision is and immediately assume that any gun they have now, even if it’s an illegal gun, suddenly becomes a legal gun,” he said.

First, this ruling changes nothing, not one damned thing, about the federal and state requirements for a background check. Those laws are STILL in place! Secondly, this decision in no way shape or form makes any gun suddenly legal, get a freaking grip!

Justice Thomas’s opinion is well worth the read in it’s entirety. Found here. However, it’s this piece in the footnote that is ALSO highly relevant to our 2nd Amendment rights.

And in light of the text of the Second Amendment, along with the Nation’s history of firearm regulation, we conclude below that a State may not prevent law-abiding citizens from publicly carrying handguns because they have not demonstrated a special need for self-defense. See infra, at 62. That conclusion does not depend upon any of the factual questions raised by the dissent. Nash and Koch allege that they were denied unrestricted licenses because they had not “demonstrate[d] a special need for self-defense that distinguished [them] from the general public.” App. 123, 125. If those allegations are proven true, then it simply does not matter whether licensing officers have applied the proper-cause standard differently to other concealed-carry license applicants; Nash’s and Koch’s constitutional rights to bear arms in public for self-defense were still violated.

“And while the dissent seemingly thinks that the ubiquity of guns and our country’s high level of gun violence provide reasons for sustaining the New York law, the dissent appears not to understand that it is these very facts that cause law-abiding citizens to feel the need to carry a gun for self-defense.”

Contrary to what Democrats and the media are screeching about, this case was solely about an American’s right to keep and bear arms in their home and out in the community. The New York law infringed on their 14th Amendment and the 2nd Amendment rights.

The SCOTUS decision is a win for our 2nd Amendment rights, which ARE absolute!, and an incredibly important win at a time when politicians are going after our rights in response to deranged individuals shooting up schools and grocery stores.