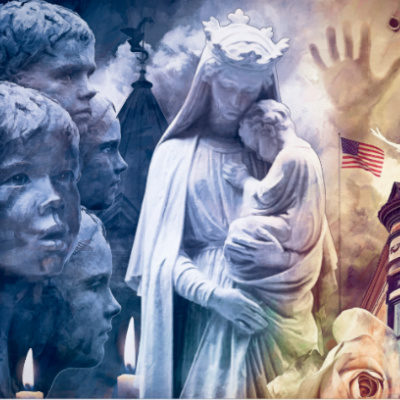 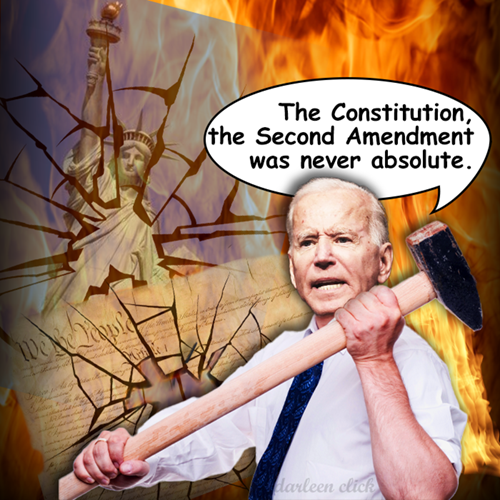 The 2nd Amendment, nor our Constitution are absolute according to the brilliance that is Joe Biden. That’s quite a message to impart on Memorial Day isn’t it?

Today, as we honor, remember, and grieve with Gold Star families, Joe Biden decides to tell the world that all we fight for should be wiped away in the interest of appeasing gun control advocates.

“Things have gotten so bad that everybody is getting more rational about it,” Biden, a Democrat, told reporters as he returned from his weekend trip to memorialize the 19 children and two teachers killed last week in the nation’s worst mass school shooting in a decade.

“The idea of these high-caliber weapons — there is simply no rational basis for it in terms of self-protection, hunting,” Biden said.

Oh, so evidently his “Do Something” involves blasting our Constitutional rights to smithereens. Here’s something that the media is completely leaving out of Biden’s “rational” commentary.

"The .22 caliber bullet will lodge in the lungs and we can get it out. A 9 mm bullet blows the lung out of the body. The idea of a high caliber weapon, there is no rationale for it in terms of self-protection, hunting."

First, finding out a 9mm bullet can just blast a lung right out of someone’s body is definitely a new one! Second, can someone point me to that manufacturer? I have questions! Third, no wonder the media is covering for Biden on this, his comment, like most comments, are a word salad of idiocy!

I won't be taking firearms advice from a guy, then-VP, who told Field & Stream in 2013, "[if] you want to keep someone away from your house, just fire the shotgun through the door." https://t.co/GqmX5iigzv

He's disingenuous and adding fuel by uttering misinformation like this. https://t.co/BD83xBVhKT

Biden, from the very start has had ZERO clue about guns of any kind.

That hasn’t stopped breathless reporting regarding Texas law and the implication that it’s the “relaxed” Texas laws that gave the shooter the idea to shoot his grandmother and kill nineteen children and two teachers.

Which completely ignores the fact that A. The shooter legally purchased the rifles and in fact waited over a week to pick them up. B. The shooter by both Texas and federal law wasn’t allowed to purchase handguns. C. Where did the shooter come up with the money to make these purchases??

Yet here is Biden parroting the Democrat party line once again, with an added twist.

There is nowhere near enough support from congressional Republicans for broader gun measures popular with the public — like a new ban on assault-type weapons or universal background checks on gun purchases. Still, Democratic advocates hope meaningful measures could still pass.

Biden said he’d not spoken to Republicans on the issue “but my guess is … they’re going to have to take a hard look.”

The president also said “it makes no sense to be able to purchase something that can fire up to 300 rounds” and added, “The idea of these high powered weapons, there’s simply no rational basis for it.”

Wow. Did you catch that implication? If Biden and the gun grabbing Democrats had their way, the 2nd Amendment would be erased from our Constitution. Period. However, folks are jumping on that with both feet and scissors. They’d love nothing more than to have our 2nd Amendment erased from history. For example:

There is NO constitutional right to own a gun. That was literally made up by 5 GOP Justices in 2008 decision of DC v Heller. We need to make overturning Heller a cause like the right made overturning Roe v Wade. My @MSNBC https://t.co/4K6mhc38bi

Yes, indeed. The 2nd Amendment magically appeared during the Heller case. The awful thing is, people actually believe that because they’ve never read the Constitution nor were taught about it in school.

At least Biden admits that he actually can’t “outlaw a weapon” nor change anything about background checks. Which is kind of a tacit admission that the background checks DID work for the Uvalde shooter.

As to Biden’s comment about a high-powered weapon that fires “300 rounds,” please point me to the weapon a civilian can LEGALLY own that does so. Biden’s comments once again fit right into his lying about anything to do with guns or our 2nd Amendment. Waiting for the Washington Post to issue yet another fact check…

Last June, this same claim earned Four Pinocchios: "We have no idea where he conjured up this notion about a ban on cannon ownership in the early days of the Republic, but he needs to stop making this claim." https://t.co/zi2g4SdNj3 https://t.co/llakVPlKMQ

Biden and the rest of the gun-grabbing Democrats hate our Constitution and they especially hate the 2nd Amendment. They want to ban it all as that is, according to their rationale, much easier to do than to address the REAL elephants in the room, which includes fractured families, drugs, and mental health issues.

Getting rid of the 2nd Amendment won’t change what happened in Uvalde, Texas. It won’t magically make tragedies like this non-existent. It will embolden criminals and leave law-abiding citizens in peril.