Previous post
Trump Speaks: "Stop It" And Other Issues [VIDEO]

Next post
Barack Obama: Rude, Crude and Uncalled For "Nationalism" 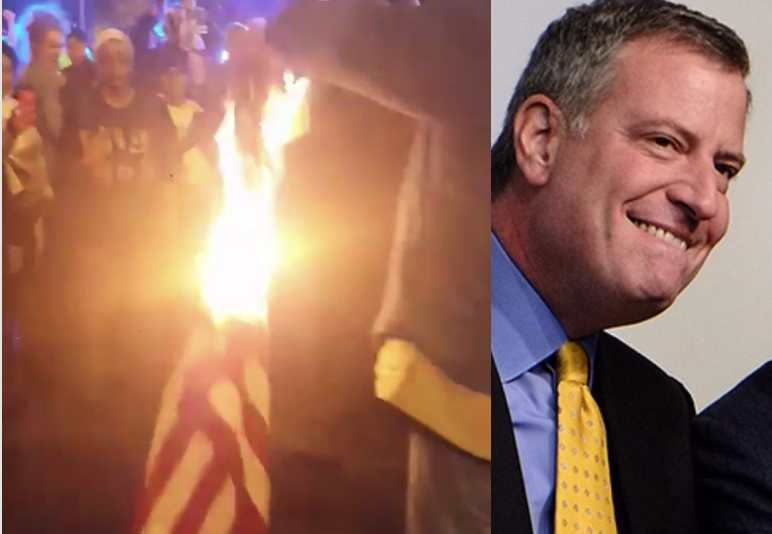 The Democrat Party—crushed Tuesday night like a lobster at a Surf ‘n Turf feast—wants to take its power back. And it’s thinking Nancy Pelosi, Elizabeth Warren, and creepy commie George Soros are the three compadres to do just that. (Why, by the way, has Mr. Soros not been arrested and prosecuted for funding domestic terrorism?) But they’re not alone. Mayor Bill de Blasio of New York City—the same Bill de Blasio whose claim to fame is allowing public urination, demonizing his own law enforcement, and overseeing an increase in violent crimes in his city since taking office—has jumped on to the CryBaby Bandwagon, encouraging more anti-Trump riots:

“We have to recognize that all over this country, the more disruption that’s caused peacefully … the more it will change the trajectory of things,” said de Blasio in an interview.

De Blasio said that resistance is entirely necessary, claiming that Trump is likely to lose the popular vote and therefore will ‘not have a mandate to rule.’

Trump has no “mandate?” Have you seen this map, Mr. de Blasio?

Here's the election 2016 county map from the NYT. pic.twitter.com/vCtBCFJh5g

Or these maps that bode not at all well for Democrat power in the foreseeable future?

Might I remind you of this photo, of those “protesters” you support, advocating for the rape of the President Elect’s wife:

Hundreds of anti-Trump protesters have just stormed a mall in Portland.pic.twitter.com/tjG0hM4ECC

Anti-#Trump protest shuts down 395 expressway in Washington, DC. Traffic at a halt pic.twitter.com/6ElLCYpTrG

…is what you’re supporting, Billy. It’s nothing short of domestic terrorism.

Meanwhile, following said red-tide whiplash, suddenly Mr. de Blasio is concerned about accountability, and seems to think that our divided nation is a recent phenomenon:

“We need to hold Trump accountable for anything he does that encourages hate and division…The more extreme he is, the more people fight back, the more it takes away his power.”

Strange. Where have you been for the past eight years while Barack Obama has wielded the IRS, the EPA, the DOJ and just about every other federal agency like the master of the One Ring?

We the People have had enough, Mr. de Blasio. We’re tired of your bullying, your exclusion, your failed policies. And we’re tired of the sitting president and the twice-failed Democrat nominee whose silence in the face of astroturfed chaos continues to speak volumes. We shouted it loud and clear last Tuesday. Get over it. Your side lost. And you didn’t just lose, you lost in a nationwide bloodbath, from the White House all the way down to your friendly neighborhood dog catcher. Your party is smaller and weaker than it’s been in nearly a century. And just like Obama boasted: elections have consequences. Now get to the back of the bus while the adults clean up your eight-year-long mess. Here’s hoping the citizens of New York City see fit to toss your incompetent tuckus out in 2017 in similar fashion. Because it’s more than obvious that you still don’t get why it is that your party was filleted like a Chilean sea bass. And that’s the very reason your own electorate should remove you from any position of power.