Trump Speaks: “Stop It” And Other Issues [VIDEO] 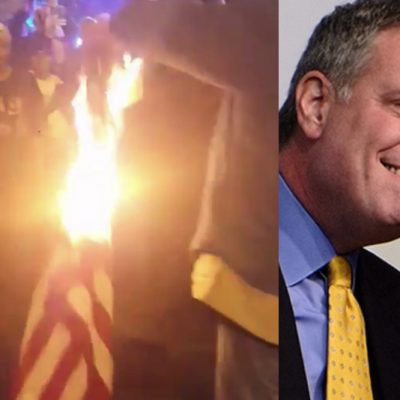 Trump Speaks: “Stop It” And Other Issues [VIDEO]

President-elect Trump gave his first major post-election interview to Lesley Stahl of “60 Minutes.” After an interesting news day when Reince Priebus and Steve Bannon were both rewarded for their loyalty (with appointments as Chief of Staff and Chief Strategist and Senior Counselor to the President, respectively), Trump then sat down with Stahl with interesting results.


On the Supreme Court:
Trump has an immediate court appointment to make. He is so far sticking to his campaign promises on the kind of justice he will appoint.

Trump added that his Supreme Court nominees would also be “very pro-Second Amendment.”

However, anyone looking for a turnover on same-sex marriage shouldn’t be looking for President Trump to rock that boat.

As for same-sex marriage, Trump said after the Supreme Court ruling last year it’s the law of the land — and that he is “fine” with that being the case.

Will Donald Trump hire a special prosecutor to investigate Hillary Clinton? "I'm going to think about it…I don't want to hurt them," he says

Trump won’t say he won’t appoint a special prosecutor for Hillary Clinton. “She did some bad things.” #yikes

I honestly think Trump is hedging his bets here, which you can see by the reaction on both sides. The right hears that he’s not gunning to take Hillary down, but the left hears no promises not to do it, either. I think he’s waiting to see if Obama will play the one last card and pardon her (and when asked directly, White House Press Secretary Josh Earnest wisely clammed up), which would spare the future Trump administration a lot of time, effort, and political capital. As much as Hillary richly deserves legal repercussions for her handling of classified information, Trump can afford to be patient and not reveal all his cards.

On salary and vacations:

Trump: No 'big' vacations, no salary as president https://t.co/iFv6F1pC0X pic.twitter.com/YMktggEhWa

Another sunny and cool day. Another round of golf. Pres Obama back at @JBA_NAFW this weekend for another session on the links.

Not to say that Trump doesn’t enjoy golf, but I think no president has ever enjoyed the golf perks as much as Obama has.

And on hearing that supporters are acting out because of his win:

Asked about hate speech by some of his supporters, Trump tells offenders to "stop it" pic.twitter.com/go6uCGvBgR

Pres-elect Trump when asked about his supporters harassing Latinos and Muslims: "I'll say it right to the camera. Stop it." pic.twitter.com/oCLOMsrMm8

Brevity is always best. I don’t know how anyone can misconstrue a simple direction like “stop it.” I do hope that Trump supporters take that to heart, but I also hope that people who have genuine concerns will also hear it and realize that Trump is not going to condone bad behavior.

Now, if Obama or Hillary could just say “stop it” to the protesters who are still going on about how mad they are that their candidate didn’t win, we’d ALL be better off.