Previous post
Vox: Cancel Dolly Parton Because Of Her "Dark Side" 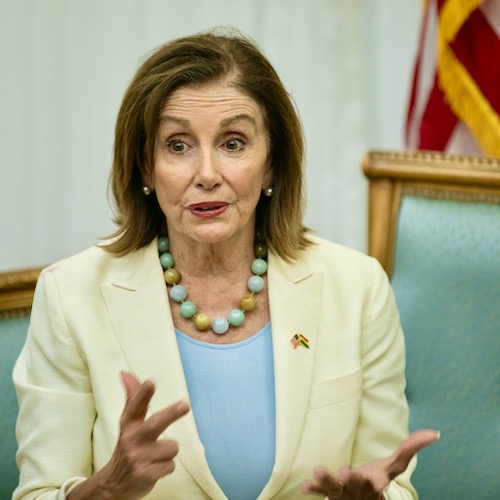 by Nina Bookout in Everything Else 9 Comments

“These people” don’t belong. House Democrats don’t want the any of the House GOP members on the 1/6 Commission that will “investigate” the events that took place at our nation’s Capitol that day.

As we’ve known for a couple of weeks now, Nancy Pelosi has decided that a 1/6 Commission is necessary. They will GET THE TRUTH! and find those dastardly culprits who planned this outrageous assault on our Capitol on January 6, 2021.

We all know that this is another way that Nancy wants to ensure the the findings point the sole finger of blame at President Trump. And one way to do so is to stack the panel.

“Speaker Nancy Pelosi and her Republican counterparts have already traded one offer each but still remain at odds over several issues including membership on the proposed commission, according to multiple sources familiar with the talks. Pelosi, who’s vowed to quickly take up legislation creating the commission, proposed tilting the panel in favor of Democrats, with her party getting to pick seven of the members while Republican leaders choose four additional appointees.

Nancy supposedly wants to model this after the original 9/11 Commission. That commission was very non-partisan as there were an equal number of Republicans and Democrats seated. As Politico admits, even the members of the 9/11 Commission freely admitted that it was the very fact that there was equal representation that led to the success of investigation.

“Their willingness to take bipartisan ownership of the direction of the investigation, without an edge for either party, helped ensure the commission’s credibility in the eyes of the public, they said. For a review of the Jan. 6 riot to be credible, the former commissioners said, it must similarly be seen as independent and unbiased, rather than a tool of either party.

Exactly so. However, in today’s climate, do you really think a bipartisan Commission will work. It can, it should! The Washington Post feels otherwise. That wonderful non-biased rag opines that it can’t happen because Republicans won’t consider a full reckoning that calls President Trump to account for his actions.

Republicans are objecting to the 1/6 commission having a broad purpose in its investigation of the factors leading up to the insurrection, a Dem aide tells me.

The problem is not partisanship. It's GOP radicalization.

See? This is just another way for Democrats to skin that impeachment cat.

In regards to this 1/6 commission, will it really help?? Will we find anything new? Honestly? I doubt it. Here’s why.

The Democrats have had their narrative in place for weeks now. President Trump is the one to blame for this. As are all those misguided so-called conservatives who follow Q-anon and are gun-nuts, kooks, and conspiracy theorists.

Oh, but we are supposed to believe that there will be no bias from the Democrats on this little investigation. No, none whatsoever.

It’s already obvious no Republican – active or inactive – will serve on any 1/6 Commission for any purpose but to cover-up GOP involvement.

Time to skip this plan and move directly to a Special Prosecutor. https://t.co/xUD0wHMUjY

Yes, I know. It’s Keith Olbermann. Yet it’s worth pointing out that he is just parroting with the Democrats and media already believe. The Republicans won’t be objective. Thus a special prosecutor is needed. Uh huh… we’ve already seen how well Special Prosecutors have worked these last four years. The swamp definitely lives on in the DOJ.

Here’s the kicker to this. The Democrats absolutely want to stack the deck on this commission. Why?

“But rank-and-file Democrats are citing a very different reason they don’t want the panel’s power split evenly between the parties: They simply don’t trust Republicans to investigate an attack on the Capitol that, in the eyes of livid Democrats, was kindled by those same GOP lawmakers.

“We do not owe delusional deniers a role or a platform in a commission designed to try to ferret out extremism and violence to prevent its recurrence,” said Rep. Gerry Connolly (D-Va.), who had predicted the Jan. 6 violence based on the rhetoric from then-President Trump and his GOP allies. “These people are dangerous.”

Wait what??? “THESE PEOPLE?” Wow, that’s one helluva statement by a sitting Congressman. Hey Gerry? Let’s talk about “these people” for a minute shall we?

Every single Republican member of Congress soundly condemned what took place on January 6th. Every single one of them made it clear that they were appalled and disgusted by what took place in our Capitol that day. Furthermore, some of “these people” of whom Gerry speaks crossed the aisle and voted FOR impeachment. Does Gerry Connolly consider Liz Cheney one of “these people?”

Gerry and the rest of the Democrats are doing that which they say they despise. They are using divisive language designed to inflame and further disenfranchise House Republicans. Furthermore, their pointed use of “these people” also serves to highlight how they continue to think of American conservatives across the United States. That’s correct, we are the deplorables. We are “THESE PEOPLE” you so disparagingly speak of.

Will Nancy’s 1/6 Commission be objective and unbiased? Not with THOSE PEOPLE in charge it won’t.