Op-Ed: We Cannot Lose Hope In Our Republic

Op-Ed: We Cannot Lose Hope In Our Republic 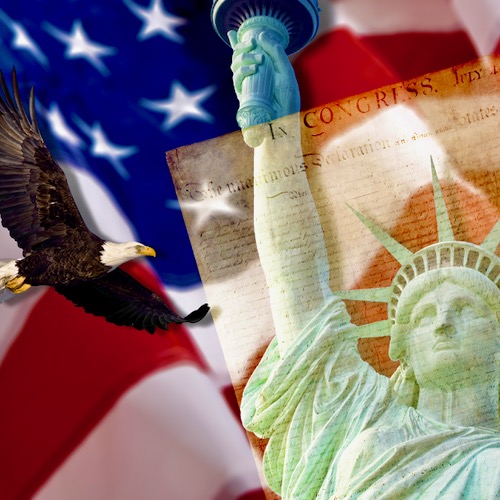 Do not lose hope in our Republic. We must not lose sight of the freedoms we are so privileged to have and that those around the world strive for.

Today’s events have shaken us all. Most especially it has shaken Americans who only want a country governed by We The People. In protesting and articulating concerns about election rules, election integrity, and the results, instead of staying peaceful, bad actors decided to make the wishes of the media and Democrats come true.

Climbing the walls of the Capitol, throwing down barricades, confronting our police physically, breaching the House and Senate buildings as well as the floors of the Senate and House solves nothing. The shameful antics of a few have now made things worse for many.

This Republic, our Shining City on the Hill, has taken more than a few hits these last few years, and multiple hits since May 2020.

We’ve been told time over time that it is ok to incite violence and demand impeachment of a President who was not the chosen one by EITHER party. We’ve been told time and again, that using a scurrilous dossier is fine, because the WRONG guy was elected. We were reassured many times this summer that all the rioting and looting was mostly peaceful, and no one should be concerned about the damage to small businesses or if the virus will spread. It was all very very one-sided.

Let me be blunt. I don’t believe today’s events helped the discussion regarding election integrity, nor will it help our Republic. However, I TRULY understand the reason for conservative protests even as I don’t understand how breaching our Capitol will solve the problems.

People have suffered and died under these lockdowns while ALL our politicians and media play games. Violence was all over our streets for months with ZERO consequences from anyone even as many Americans including myself called for said consequences.

“There are no institutions, no political or media actors who can escape blame for this year of violence, and I include myself in that. Yes, of course, Joe Biden should have condemned more quickly and forcefully the summer of violence, just as Donald Trump should not have given his fiercest supporters quixotic false hope of a victory. In a year in which washing them has never been more important, nobody’s hands are clean.”

Agreed. As I pointed out in the election commission post, Americans have lost faith in our electoral process and have lost a great deal of faith in our politicians, and in our Republic. Why?

In many ways we’ve all brought it upon ourselves. Myself included. How and why? We got discouraged by the process. We decided that it wasn’t important to pay attention to what our elected officials were doing on the national or even the local levels. Civics is an integral fabric to keeping our Republic strong, and too many of us forgot that or abdicated our own responsibilities about protecting our Republic.

Our hands aren’t clean for multiple reasons, and today is just one of the many many instances that have driven this Republic to this point.

That said. What do we need to do? We MUST step up

STOP letting our politicians, no matter the party, run unchecked and not be beholden to those who elected them

STOP letting the few drive the narrative of the many

START by LIVING and informing our politicians that THEY are beholden to US, not the other way around

START by reading our Constitution and then reading it again, multiple times

Today was a an inexcusable day for our Republic. It is a day that hurts my heart. But we cannot lose hope or faith in our Republic.

As I stated above and elsewhere, I GET IT. All of us, We the People, are fed up with our lives being yanked around willy nilly on political whims. What happened today was an example of how fed up Americans are. Yes, it was bullshit. Yes, it shouldn’t have played out like this, but again, I get it and so should everyone else.

I also get that so many of us who’ve followed the LAW are understandably frustrated. If contacting our elected officials, voting, not engaging in riots before today, and waving flags doesn’t change things, then what will? We are supposed to just lay down and take it? Rioters and looters get bailed out with zero consequences. Why shouldn’t those who breached the Capitol? It’s a fair question. And if people don’t like the question, then I submit they need to really look in the mirror.

If our politicians and media can give lip service and turn a blind eye to the damage and destruction that over nine months of riots have wrought across our cities in 2020, then they shouldn’t be angry about what happened at our U.S. Capitol today. But they are. And the hypocrisy is what is making Americans angry.

America, our great Republic, is STILL our Shining City on the Hill. We have faltered, but I have to and MUST believe that we can find our way again. I will leave you with Patrick Henry’s words of wisdom.

“They tell us, sir, that we are weak; unable to cope with so formidable an adversary. But when shall we be stronger? Will it be the next week, or the next year? Will it be when we are totally disarmed, and when a British guard shall be stationed in every house? Shall we gather strength by irresolution and inaction? Shall we acquire the means of effectual resistance by lying supinely on our backs and hugging the delusive phantom of hope, until our enemies shall have bound us hand and foot? Sir, we are not weak if we make a proper use of those means which the God of nature hath placed in our power.” —Patrick Henry, March 23, 1775, an excerpt from his “Give Me Liberty or Give Me Death” speech.

We cannot afford to lose hope. If we do, we falter at keeping our liberty and our Republic intact. Do not let today’s events shake your resolve and your love for Freedom.