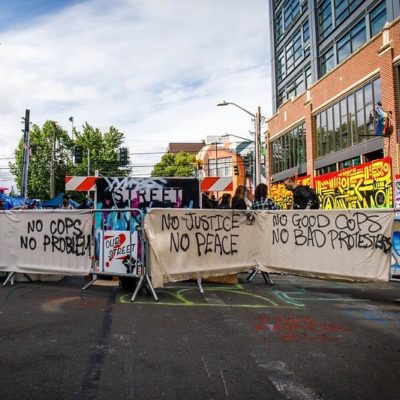 Seattle’s Summer of Love kicked off in the wee hours this morning. The Capitol Hill Organized Protest Area (CHOP), has experienced its first fatality by way of shootings.

And we thought this was a peaceful place. You know like a big street festival or something…

A regular freaken lovefest going on there. This lovefest killed a 19 year-old man. Nice job, guys.

Who responded to the incident? Seattle PD, of course, after reports of shots fired in Cal Anderson Park, near the intersection of 10th Ave. and E. Pine Street, at about 2:30 a.m. Saturday.

But alas, some protestors in the CHOP objected to Seattle police officers showing up:

Officers attempted to locate a shooting victim but were met by a violent crowd that prevented officers’ safe access to the victims.”-Seattle Police Department Statement

CHOP medics transported the two men to Harborview Medical Center, where one was pronounced dead and the other seriously injured. Names have not been released and the investigation is ongoing.

Nearly two hours of video posted on Facebook by Omari Salisbury, a citizen journalist with Converge Media who has been documenting the protests, shows a tumultuous scene as he describes how one of the victims was receiving CPR by CHOP volunteer medics, who apparently drove the critically injured victims to Harborview Medical Center, about a mile away.”-The Seattle Times

Mayor Jenny? Jenny Durkan? Where are you at? As of the time I put my fingers to this keyboard, the feckless mayor has yet to say ANYTHING about the incident. Nothing about the shootings AT ALL.

The Capitol Hill Autonomous Zone #CHAZ is not a lawless wasteland of anarchist insurrection – it is a peaceful expression of our community's collective grief and their desire to build a better world. Given his track record, it's not hard to believe that Trump is wrong, yet again.

A “peaceful expression of collective grief” usually does not end in a shooting leaving a young person dead, Jenny.

Surprisingly, Washington governor, Jay Inslee actually knew about the activity in the CHOP this time. Inslee said he was “saddened” to hear of the shooting and that it was “clear that the government needed to be able to provide protection for all citizens, including in that zone, and that ‘other options’ might need to be explored”.

Bring in the social workers. Maybe some addiction counselors, too. According to this, they could be of some assistance:

Lol. I was down there Wed. It’s mostly a bunch of unemployed druggies. Millions in damage. You still got the cleanup to look forward too.

Despite all of this, the delusional idiots in support of the CHOP are blaming this somehow on the fact that the shooting happened hours before a Trump rally in a completely different city! This is all part of a big MAGA conspiracy. But what can we expect from a Twitter deck comment from a guy who looks to be in his 50s with “69” in his handle? Clearly, the man is not thinking with his brain. Like ever.

There are also the shining stars who are defending protestors who were fighting with the police to keep them out and from getting to the victims in the CHOP.

As armed officers in riot gear entered the zone, people screamed, ‘The victim left the premises!’ At one point, protesters briefly surrounded a police car and then yelled, as the vehicle sped away, ‘Whose streets? Our streets!'”-Manny Fernandez and Mike Baker, The New York Times

YOUR streets? Well then protect YOUR citizens and visitors of your utopian $hithole better, oh, occupants of the CHOP! Who will investigate and “solve” CHOP’s first homicide? Is “Raz” going to go around to occupants with a line of questioning? Nothing yet from Raz Simone, either. Is he even still in the CHOP or has he retreated to one of his rental properties outside of this mess?

Meanwhile, CNN posts a short excerpt story of the shooting paired with a picture of peace-loving, masked masses meditating on the green grass of Cal Anderson-atoning for their privilege, no doubt. It’s like they’re saying, “yeah, there was a shooting,” says CNN. “But we went there last week and it was like a huge street fair with music and painting. It was groovy, baby! It is the Summer of Love!”

The CHAZ was the CHAZ until it became the CHOP that got CHOPped a few blocks. And they still said “no cops”. There were drumming circles and there was free stuff. Then, up went the borders and in came the guns. Only a matter a time before a shooting ended in a fatality. Sadly, it will probably not be the first. Train wreck of a mayor, Jenny Durkan has this 19 year-old man’s blood on her hands.