We have a few stories to follow up on this Saturday, so let’s have a look at what’s been occurring under the radar.

First, the kosher supermarket in Paris where four people were killed by Amedy Coulibaly after the Charlie Hebdo attacks has reopened in the last couple of weeks.

The survivors of the attack are also now looking to sue the French media for revealing too much information during the standoff and tipping off Coulibaly on where people were hiding.

Images broadcast from the scene on 9th January, “lacked the most basic precautions” and endangered those still alive inside, said a lawyer representing the group, Patrick Klugman.
Gunman Amedy Coulibaly stormed into the Hyper Cacher Jewish supermarket killing four and taking others hostage during the attack which followed the Charlie Hebdo attacks.
Klugman specifically mentioned news channel BFMTV, which revealed live on air that the group, which included two children, was hiding from Coulibaly in the cold room.

I have no idea what the legal threshold in France is for this, but I would say the survivors are due to have a day in court.

Second, I have been watching for developments in the murder of St. Louis man Zemir Begic. Begic, if you remember, was beaten to death last November 30th in the aftermath of the Michael Brown protests in Ferguson.


The story has largely disappeared from the media, despite the obvious “hate crime” questions that local authorities clearly did not want to address. A fourth suspect was arrested back in December, another 16 year old.

Charges have been filed against 17 year old Robert Mitchell and 16 year old Darrian Johner. They are both charged as adults with first degree murder and first degree armed criminal action.

Many at the scene claimed that Begic was attacked because he was Bosnian; the suspects are black and Hispanic. Detectives have said the investigation has not uncovered a racial motive.

When certified to stand trial as an adult, the juvenile court noted that Johner’s mother said he may be a gang member, and also needed more stringent supervision than what is available through the juvenile justice system. It also was noted that Johner got good grades at Gateway High School, but often cut classes.

I still wonder where the national media disappeared to – after all, they were all right there when this happened, because they were covering neighboring Ferguson with a microscope. But, then again, no one attempted to burn down St. Louis in Zemir Begic’s name, so it wasn’t big enough for the national media. We will be checking in on this case again as it progresses through the legal system.

Third, Alix Bryan, CBS media employee in Virginia and aspiring vigilante journalist, has now issued a non-apology for filing a fraud report regarding Indiana pizza shop Memories Pizza’s GoFundMe account, after being caught in a web of her own lies and lack of research.

Thank you for your support. pic.twitter.com/5Pmus9qa5S

This has all the hallmarks of an apology from someone trying to save her job.

Dana Loesch, who helped start the GoFundMe account through her show, was having none of it.

I'm not sure why it is so difficult for @alixbryan and @cbs6 to offer us a simple apology for the false accusation of fraud.

Bryan herself has also removed any mention of her job from her Twitter bio, going from this: 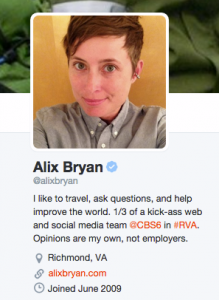 .@alixbryan changed her Twitter profile. Someone got a TALKIN TO at work: pic.twitter.com/BcZMWUw517

And Tweeters have pretty effectively taken apart her non-apology.

I don’t expect Dana Loesch or her colleagues to let this one go. I could almost feel sorry for Alix Bryan, if she hadn’t brought it all on herself.

And finally, Scott Walker wore a sweater in New Hampshire, and Politifact tried to catch him in a lie about it. No, really. Walker said to the New Hampshire audience that he’d bought the sweater for a dollar at a Kohl’s department store using their “Kohl’s Cash,” which, as most people know, is Kohl’s rewards program. Politifact actually went to Kohl’s to check their clearance rack to try and prove that Walker was lying.

Walker indicated on Twitter that he bought the sweater while in the Granite State.

He didn’t identify the location, but there is a Kohl’s in Hooksett, about 13 miles from Concord. We called the store, and an employee in menswear said all of the store’s henley sweaters were mixed with other items on clearance racks.

Based on photos of Walker in the sweater, it appears to be a “Chaps Twisted Button Mock Sweater” in a color called “walnut twist.” We couldn’t find that sweater available on the Kohl’s web site, so we visited the Kohl’s store in Glendale to paw through the clearance racks.

There we found plenty of Chaps sweaters marked between 80 and 90 percent off — an even deeper cut than the 70% Walker cited when describing the deal. Some of the sweaters we found were originally priced at $70 and marked down to $7.

Now, that’s not $1. But Walker did say he used his “Kohl’s Cash” — a coupon of sorts that is generated based on how much a customer purchased in an earlier visit to the store.

Thus, he could have easily gotten one for $1 out-of-pocket. We rate the claim True.

Perhaps because this didn’t work out, Politifact makes sure to tell us the whole thing wasn’t really their idea. The story notes, “we heard from readers from around the country who thought it was an unbelievable story.” That should tell you all you need to know about Politifact’s readers. They are people clamoring for a fact check over a Republican’s bargain shopping.

It’s worth noting that just last month, Politifact declined to issue a ruling on Hillary Clinton’s claim that she “fully complied with every rule” relating to the use of private email while Secretary of State. That story, which dominated the news for more than a week, was too difficult for Politifact to parse. The site argued that since we will never know what emails Hillary deleted, we can’t know if she was telling the truth. Even when the experts they spoke to suggested Hillary’s claims were not plausible, they stuck with no ruling.

And this is how the entire 2016 campaign will be run. We will get a blow-by-blow breakdown of every claim a candidate makes – even down to how much they paid for a sweater – so long as they have an “R” after their name.

Have a wonderful weekend, everyone, especially if you are celebrating Easter!