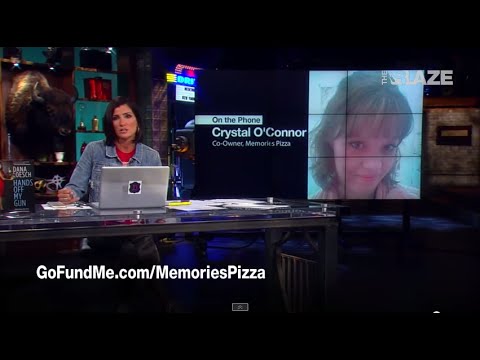 Memories Pizza in Indiana has already been forced to close after an unethical reporter created a story out of thin air with the express intent of stirring up controversy. ABC 57, located in South Bend, sent reporter Alyssa Marino to the small town of Walkerton to seek out a business that would give them their honest opinion about the RFRA bill. Owner Crystal O’Connor was polite and obliging, and said that while they would never refuse service to a gay couple who came into their restaurant to eat, they could not in good conscience cater a gay wedding if ever asked to do so. The entire situation was hypothetical, yet the media reported it completely differently. Huffington Post, for example, claimed that they “vowed” to reject gay weddings. Buzzfeed outright lied and claimed that O’Connor said she would deny gay people service. From there, what happened was sadly predictable. 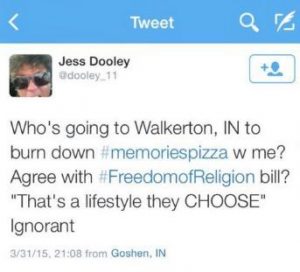 Unsurprisingly, Memories Pizza was forced to close because of the threats and bullying the owners have had to endure, all because of a manufactured outrage that the media concocted.

But, as per usual for the intolerant left, destroying the livelihood of Americans just because they happen to hold opinions that liberals disagree with isn’t good enough. They’re only getting started.

Someone started a GoFundMe account in support of the O’Connors, and the response has been overwhelming. Already, over $800,000 has been donated. It turns out that Americans actually don’t support a pair of business owners being crucified for nothing more than standing by their religious beliefs, and for politely expressing their opinion when asked for it.

But again, liberals can’t have that. Americans aren’t allowed to support people that liberals don’t approve of. So a CBS employee, Alix Bryan, decided to take action.

Bryan works for WTVR-TV, the Richmond CBS affiliate, and she decided to file a report against the Memories Pizza GoFundMe account claiming fraud. Bryan has absolutely not a shred of evidence to prove that any fraudulently activity has occurred, but she did it anyway — you know, just in case.

I have reported the GoFundMe for Memories Pizza for fraud. Just in case. http://t.co/ET0kGL0OWL

Unsurprisingly, Bryan didn’t take kindly to having her actions questioned:

My work has nothing to do with this. @LilacSundayBlog @CBS6

It wasn't bad faith, it was caution. Not sure what you want to prove but I can report you for harassment, & will if needed @LilacSundayBlog

According to Bryan, though, she’s perfectly justified in filing a false fraud report, because she thinks she’s entitled to know where the money is going and how the O’Connors will use it.

What does the money go to? How will they use it? @LawrenceBJones3 @gofundme

And while she claims that it’s “totally acceptable” to file false reports against a person just because she feels like it, and that she contacted the person who set up the GoFundMe Account, the facts are not quite on her side.

Hey, here’s an idea: why don’t we all report that Bryan committed murder? Or sexual harassment? Or robbery? You know, just in case. There’s absolutely no evidence she’s done any of these things, but who needs facts and logic on your side when you don’t like someone? She could be doing anything behind closed doors, so we should just be cautious. Right?

Unfortunately for Bryan, the station is now investigating her — probably because filing a bogus fraud report against two people simply because she disagrees with them politically is a pretty messed up thing to do. But then, in liberal America, people aren’t allowed to think for themselves and express their own opinions, are they? The O’Connors found out the hard way just how the Alinsky-esque left reacts when you dare step out of line.