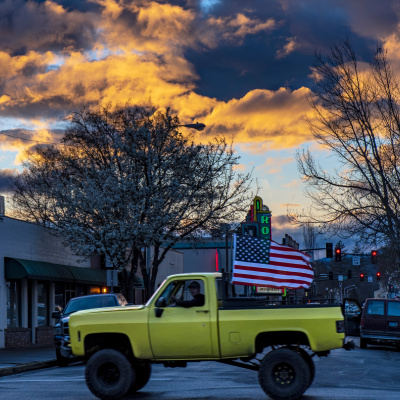 Mara Gay is a member of the New York Times Editorial Board and writes about New York City for that publication. She is also an MSNBC contributor. Memorial Day weekend she ventured out to Long Island and saw, gasp, pickup trucks, Trump flags and, the horror, American flags. The experience left her overwrought.

What is it about the women of MSNBC? Nicolle Wallace, Rachel Maddow, Yamiche Alcindor and Mara Gay are all seemingly hateful and bitter women. Andrew Sullivan called Maddow condescending and smug. That’s the kindest thing you can say about any of these women.

I happen to love this time of year. We have Memorial Day (the last Monday in May), Flag Day (June 14) and Independence Day on July 4th. I get jazzed by flags, parades and John Phillip Sousa marches. Growing up, even my Liberal friends loved the flag. We all ran to the parades. Our parents, regardless of their politics, all flew the flag. Remember how after the September 11, 2001 attacks everyone flew our spectacular American flag? Five years ago on Flag Day, our Nina wrote a beautiful post about the flag. You can read it here. That beautiful flag covered my Dad’s coffin. When someone you love, who served his country, lies under that flag, maybe you have a special passion for it.

MSNBC has their Morning Joe program with Joe and Mika. That is where contributor Mara Gay started off talking about the continued threat of President Donald Trump and ended up talking about her fear of pickup trucks, Trump flags and the American flag:

Here are some portions from Real Clear Politics and my commentary:

The reality is here that we have a large percentage of the American population — I don’t know how big it is, but we have tens of millions of Trump voters who continue to believe that their rights as citizens are under threat by simple virtue of having to share the democracy with others. I think as long as they see Americanness as the same as one with whiteness, this is going to continue. We have to figure out how to get every American a place at the table in this democracy, but how to separate Americanness, America, from whiteness. Until we can confront that and talk about that, this is really going to continue.

There are 70-some million of us Trump voters out here. We do not believe that are rights are under threat by having to share our REPUBLIC with others. We are simply exhausted from the incoming missiles of slurs like racist, homophobic and fascists, just because we disagree with you. We out here in the hinterlands do not see Americanness as whiteness. Our families are multi-hued and we are too busy trying to save our homes and businesses after the Scandemic to hate. As for talking about race, isn’t that all we do anymore?

I was on Long Island this weekend, visiting a really dear friend and I was really disturbed. I saw, you know, dozens and dozens of pickup trucks with expletives against Joe Biden on the back of them, Trump flags, and in some cases, just dozens of American flags, which is also just disturbing, which essentially the message was clear, this is my country. This is not your country. I own this.

Dozens of American flags disturbed you? Maybe, and I am spitballing here, that’s because you are a privileged person. You are a member of the New York Times Editorial Board and an MSNBC contributor. Own your privilege.

It’s also clear that neither you, nor anyone you know, in this lifetime, has sacrificed for this country. Yes, your ancestors may have been slaves. Yes, your grandparents may have been victims of Jim Crow, but you are privileged and have never sacrificed for your country. I am privileged never have had to sacrifice for my country, but I have known the sleepless nights of a mother whose child is deployed to a war zone. I know parents who have lost a child in the Global War on Terror. No one who has been handed a folded flag is disturbed at the sight. Maybe this isn’t your country because you don’t want to own your Americanness.

And so until we’re ready to have that conversation, this is going to continue. What really is concerning to me as well is, it’s not just Democrats in Congress. I think there’s a large percentage of Americans, even some of my colleagues in journalism, who are invested in some way in pretending that this isn’t the threat that it is. That is the real concern. Because, you know, the Trump voters who are not going to get onboard with democracy, they’re a minority. You can marginalize them, long-term. But if we don’t take the threat seriously, then I think we’re all in really bad shape.

Trump voters know that we live in a Republic. We do not live in a pure democracy. And, I think what you hate and fear in Trump voters is really something inside you. A bitterness and hatred.

After her MSNBC appearance this morning, Mara Gay tweeted:

Trolled? You are being trolled with the American flag? That is too funny. Maybe, if you see it enough, you won’t be disturbed by it, you will love it.