Next post
MSNBC Contributor Disturbed By Trucks And U.S. Flags 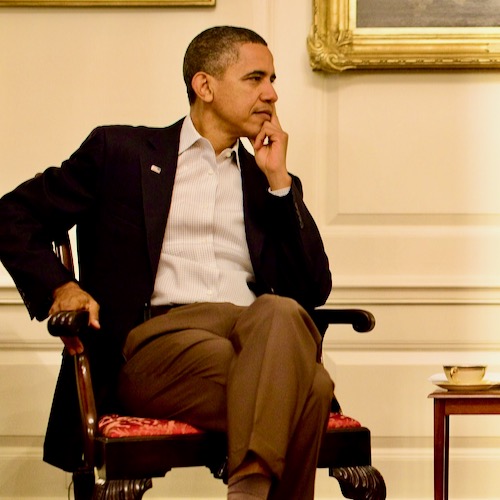 Critical Race Theory is no big deal according to Obama. Why? Because Republicans, Trump, and the right-wing media are the ones who are the architects of fear and resentment.

During an interview that aired Monday night, Obama told CNN’s Anderson Cooper the country has not “fully reconciled with our history” and that it’s a “hard thing to hear,” especially for White Americans.

“You can be proud of this country and its traditions and its history and our forefathers … and it’s also true that this terrible stuff happened and the vestiges of that linger and continue,” Obama said. “And the truth is that when I try to tell the story, oftentimes my political opponents would deliberately not only block that story but try to exploit it for their own political gain.”

In an interview with Jewish Insider, Obama stated the following:

Until we can agree on a common set of facts and distinguish between what’s true and what’s false, then the marketplace of ideas won’t work. Our democracy won’t work. So, as citizens, we need to push our institutions to address these challenges.

Right now, it’s easy to focus on what divides us, and there are plenty of people out there who benefit from driving us further apart. But our future depends on our ability to actively resist those forces; to look past our differences and understand that we want the same things for ourselves, our families, and our communities. The new movements for justice in this country are informed by the Black and Jewish experience, as well as many other communities who have come together. The more we can focus on what we have in common — whether we’re Black, White, Jewish, Christian, Muslim, or anything else — the better off we’ll be.

However, further on in that interview, Obama essentially blames conservatives and White Americans for the rise in anti-Semitism these last few years. Furthermore, Obama, in his interview with Anderson Cooper, blasts White Americans and White Republicans for pushing back against Critical Race Theory.

Guess what Obama? You, yourself are one of the key architects of the divisiveness this country is dealing with right now. The list is long, but includes the idiotic beer summit, Ferguson, and so much more.

Let’s talk about what is causing some of the division right now. Here is what Obama said to Anderson Cooper.

"Lo and behold, the single most important issue to them apparently right now is Critical Race Theory. Who knew that was the threat to our Republic?" pic.twitter.com/HyghsGz6Ph

Guess what Obama? You do NOT get to tell White Americans that Critical Race Theory  is no big deal. It IS a very big and incredibly divisive deal. Why?

Because we are being told our skin color, our WHITE skin, is bad. We are being told at our work that our whiteness is the cause of every workplace problem people have. Psychiatrists are advocating for people to get rid of their white friends and fantasizing about killing white people. Professors are either being slammed for their whiteness or are actively engaged in promoting CRT in college classrooms. Not only that, but many white professors are twisting themselves into pretzels to apologize for their “whiteness” and unconscious racism. For example:

The first to go in my group was an older, white female employee of the college. It didn’t take long for her to break into tears as she reflected on how racist she had been her whole life. It wasn’t that she had committed racist acts, she explained, but rather that her white skin had made her a negative presence in “black and brown” lives.

Meanwhile, parents all over the country are standing up for their kids and standing up against school boards for promoting and pushing CRT in the K-12 classrooms.

Parents, and Americans as a whole also need to stand up to corporations such as Pizza Hut who have been funding Critical Race Theory in our schools.

Cont. Fifth grade social studies teacher shares her Critical Race Theory “anti-racism” curriculum from her classroom. Listen to her take on America and how the kids react.

This CRT curriculum is part of a collaboration effort with “Empowering Educators” sponsored by Pizza Hut. pic.twitter.com/ocHeCqFA3G

Critical Race Theory is meant to divide us. It is a completely judgmental movement that advocates complete and total discrimination based upon skin color.

Republicans and ALL Americans should be concerned about and fight against Critical Race Theory. This execrable “theory” uses discrimination as a weapon, and is in fact, working to RE-segregate America. Obama likes Critical Race Theory, particularly because one of his favorite college professors was a founder of CRT, which is why he is so dismissive of Republican concerns about it.

By pushing back and doing our best to call out the dangers of Critical Race Theory, Obama tells us we are stoking fear and resentment among white people.

Last fall, Obama told the world he doesn’t believe in America. His arrogant dismissal of our very real concerns about the racist and discriminatory Critical Race Theory is just another manifestation of his disdain for this Republic.

Feature Photo Credit: Obama in chair, by janeb13 via Pixabay, cropped and modified