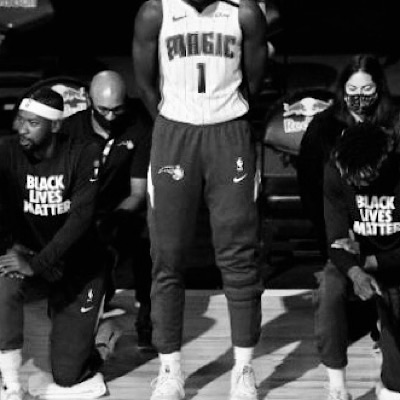 Orlando Magic forward, Jonathan Issac, did a thing yesterday. Issac became the first NBA player to actually stand for the National Anthem. The NBA resumed its season after a 20-week hiatus due to COVID-19 and amidst racial upsets and protests nationwide caused by the death of George Floyd.

Issac, who is Black, was seen standing as players and coaches from both teams, as well as referees, took a knee during the playing of the National Anthem. The 22-year-old was also the only player seen not wearing a “Black Lives Matter” shirt.

Wow bra Jonathan Issac just pissed me off!! Literally EVERYONE decided to do something to show solidarity & this bozo, a BLACK MAN decides not only to not kneel but to also not even WEAR THE BLACK LIVES MATTER SHIRT????? GET THIS FCKIN WEIRDO OUTTA HERE!!! WEAK ASS!!!

For me Black lives are supported through the gospel. All lives are supported through the gospel. We all have things that we do wrong and sometimes it gets to a place that we’re pointing fingers at who’s wrong is worst. Or who’s wrong is seen, so I feel like the Bible tells us that we all fall short of God’s glory. That will help bring us closer together and get past skin color. And get past anything that’s on the surface and doesn’t really get into the hearts or men and women.”-Jonathan Issac, Orlando Magic

Can you explain what religion has to do with kneeling for the anthem to protest against racism and police brutality? pic.twitter.com/me61FleWPY

Issac has been called a “BOZO” by some. But the BOZO of a reporter in this interview feels completely validated asking a BLACK man if he thinks, Black lives matter? It makes us want to ask the reporter a follow up question: “What do you think, genius?!”

The people saying Jonathan Issac is “brave” and a “leader” are the same people who said Kaep was “out of line” & “not standing with his team” 🤡 🤡 pic.twitter.com/5yCXmm2plq

Kaep was out of line. But not for kneeling, exactly. It was his other actions and general attitude beyond The Great Knee That Started It All that categorized Colin Kaepernick as “out of line”. Let’s talk about his choice of socks at practices. Interesting how we see disturbing videos of Antifa and anti-police rioters setting a pig’s head with a police officer’s hat ablaze in Portland a few nights ago. Colin Kaepernick further showed the NFL and fans who he was in his punk move of moving his practice to another location even though the NFL was poised to perhaps make him gainfully employed once again. Apples and oranges here.

Jonathan Issac gets criticism, however, for being “out of line” because he did not fall in lockstep with the rest of his teammates and take a knee or wear a BLM t-shirt. He did not go along with the mob. He should be punished for this. The very same people who are criticizing those who raised eyebrows at Kaepernick’s infamous kneel in opposition to police brutality are criticizing a man who decided to stand in the name of God and our country and in the name of Black lives. Why? Because Issac realizes there is a Higher Power than the people who sign his paycheck. Good on him. Hopefully, this does not have repercussions on the young Magic forward. While Kaepernick’s taking the knee was seen as “individualistic” the left will say Issac’s stance was divisive. That, as a Black man, he should have been in unity with his teammates. That, as a Black man, he should realize Black Lives Matter and he can only do that by wearing a stupid t-shirt and not standing for his nation’s colors.

Here is an athlete that gets it. That we all fall short. That God doesn’t see skin color because He created us in His own image. But God, not seeing color and not falling in line with the masses now is a racial construct-even if it is exercised by a typically marginalized race. Because Jonathan Issac quoted the gospel as his compass and his reasoning for taking a stand, he is a “wacko” a “bozo”. He was supposed to listen to what the woke, white liberals told him. Yes, even in his Christian circles and yes, there are many who blacked out a few weeks ago on Instagram and now will use THIS to promote their church. Issace should have just worn the damn t-shirt and took a knee.

I remember a slogan from a few years back:

“Believe in something, even if it means sacrificing everything. Just do it.”

Unless, you’re Jonathan Issac. Then, your beliefs apparently DON’T matter.

Photo Credit: the feature photo used from Ashley Landis was altered, cropped, and colorized to meet fair use standards