Hillary’s email debacle has more legs than a mutant octopus. And every single one of those legs is diseased. Think I’m exaggerating? Nope, not even a little bit. As our readers know, we’ve covered this latest unprecedented Clinton issue here, here, here, and here. On each occasion, the concerns about security have been raised. No matter how Team Hillary tries to spin this, her home-grown system’s insecurity is indeed a national security issue. 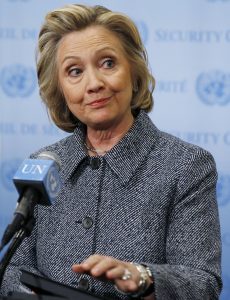 At one of the most awkward press conferences ever, she informed us that she took the “unprecedented” step of turning over 55,000 emails to the State Department for review. Meanwhile another 30,000 emails were deemed private by her Highness. Yesterday, Time’s David von Drehle shows us “The Clinton Way”:

The Clintons play by their own set of rules. And in this case, the former Secretary of State explained, those rules bless her decision to erase some 30,000 emails from the family server despite knowing that the emails had become a subject of intense interest to congressional investigators. These were merely “private personal emails,” Clinton averred, “emails about planning Chelsea’s wedding or my mother’s funeral arrangements, condolence notes to friends as well as yoga routines, family vacations, the other things you typically find in inboxes.” After she finished taking questions, Clinton’s staff disclosed that no one actually read through those 30,000-odd documents before she “chose not to keep” them.

That last sentence is incredibly disturbing. No one but Hillary, I mean NO ONE actually read through those emails before hitting the delete button. Was it really personal correspondence that was deleted, or was it something else? Why was she the only one who got to be the arbitrator of what emails are public or private?  Makes you wonder doesn’t it? Then there is the fact that Hillary printed the 55,000 emails that were turned over to the State Department (two years after the fact mind you) instead of following established protocols.  All of which is incredibly suspect. Andrew McCarthy at the National Review explains:

Shannen Coffin had an important NR column Wednesday, exploring for a second time the question whether Hillary Clinton committed a crime by failing to turn over government records – the thousands of work-related emails on her private server – when she left the State Department two years ago. On Fox News’s The Kelly File last night, he and Megyn Kelly followed up: outlining how, contrary to suggestions from Camp Clinton, there is a serious process involved when a high-level official stops working for a federal department – a process designed to ensure that all work-related information has been turned over for retention in government files.

While it is true, as Mrs. Clinton has said, that the departing official must decide what information belongs to the government and what is private, that is just the start of the process. What the official claims is private must be inventoried and reviewed by the department’s records retention staff; if there is any doubt about whether a record is related to official business, the default position is that the government retains the record.

Did you catch that? Anything that Hillary claimed is private should’ve been inventoried by the State Department. And it WASN’T. WHY NOT? Good question. Here’s another question: the Blackberry Hillary using wasn’t State Department issued? WHY NOT? In fact, if Hillary followed protocol and signed Form OF-109, then everything she has done since is in direct violation of federally established rules and regulations:

But that’s not all. The national security implications are very real. As I suspected, hackers must hack. And this Hillary debacle is a perfect set up for even the most amateur of hackers. Fox News James Rosen reports:

Stirred by the controversy surrounding Hillary Clinton’s use of a private email server when she was secretary of state, a determined band of hackers, IT bloggers, and systems analysts have trained their specialized talents and state-of-the-art software on clintonemail.com, the domain under which Clinton established multiple private email accounts, and uncovered serious lapses in security, according to data shared with Fox News.
The findings call into question Clinton’s confident declaration, at a hastily arranged news conference in New York on Tuesday, that “there were no security breaches” in her use of a private server. One prominent figure in the hacker community, bolstered by long experience in the U.S. intelligence community, has undertaken to build a virtual “replica” of Clinton’s server configuration in a cyberlab, and has begun testing it with tools designed to probe security defenses. This individual has shared details of the Clinton system not disclosed publicly but legally obtainable.

Hackers have been able to locate her server, and the approach to network and data security was complacent at best and naïve at its worst. The vulnerabilities the system has shows the willful ignorance of Team Hillary and those who’ve bowed to her rather than protect our national security. Some of these issues have been known since 2010 and yet nothing was done to stop the Secretary of State from continuing to ignore the rules. Furthermore, the email system wasn’t encrypted for the first THREE months she was Sec of State!  So yeah, we’re supposed to ignore the fact that her ‘unprecedented’ email security is very INSECURE:

Just the original decision to use a private email account, with Clinton’s own surname embedded in it, has baffled the hacker community. The analyst with experience in the intelligence community, a “white hat” hacker — the kind corporate firms retain to conduct “penetration testing” that exposes businesses’ cybersecurity lapses — told Fox News: “If we learned that the foreign minister of a major foreign country was using her own private server to send and receive emails, and was relying on outdated commercial software to operate and protect it, that’d be a hallelujah moment for us.”

As many are beginning to realize; Hillary’s email problem is one of massive insecurity. Never mind Hillary that you’ve taken such “unprecedented” steps to send carefully chosen emails back to the State Department. Your flouting of the rules to establish your own system has accomplished one thing and one thing alone; it has shown us all, allies and adversaries the world over, how insecure you truly are.  Do we really want a President whose paranoid insecurity puts our national security at risk? No.