Previous post
National Guard At The Capitol - What Could Go Wrong? 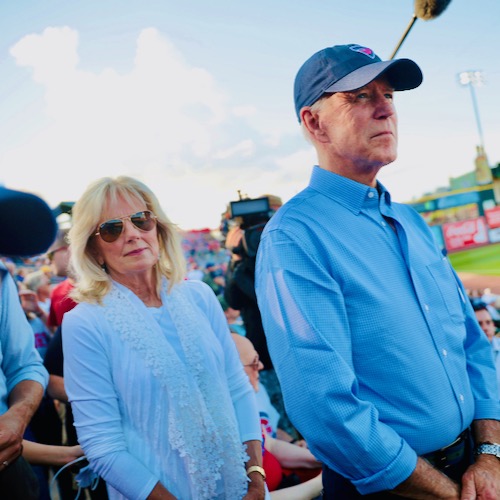 Executive Orders and “aggressive legislation” is the Biden agenda this week. He’ll be signing lots and lots of papers it seems.

“One of Biden’s most common campaign trail promises was to tackle an issue on his first day in office — a pledge he usually made to either contrast himself with President Donald Trump or highlight just how important he believed an issue to be. These promises were made on everything from climate change to immigration to foreign policy, and many are reflected in Klain’s Saturday memo, which was first reported by the New York Times.

“During the campaign, President-elect Biden pledged to take immediate action to start addressing these crises and build back better,” Klain writes. “As president, he will keep those promises and sign dozens of executive orders, presidential memoranda, and directives to Cabinet agencies in fulfillment of the promises he made.”

The memo sent out by Klain covers a lot of ground.

Here's the Biden memo first reported out by @shearm and @peterbakernyt.

"In his first ten days in office, President-elect Biden will take decisive action to address these four crises, prevent other urgent and irreversible harms, and restore America’s place in the world." pic.twitter.com/YQ6OZjRtgZ

This was supposed to be about healing and unity. Why then does the Biden camp lead with ‘WE HAVE FOUR CRISIS TO DEAL WITH??’ Wasn’t the Biden campaign all about being positive?

When they lead off by telling the American people that we are in trouble because:

First of all, the Biden team will be adding to the division in our country by telling us that, unless we toe the politically correct line they draw for us, we are likely racist. According to Kamala Harris, racial justice won’t be achieved until economic justice happens. How to interpret that? Everybody work hard to be FAIR to everyone, then unicorns and rainbows plus healing will follow!

As for climate change, Biden plans to shove the United States back into the Paris Accords. Which also opens the door to countries such as China (who is most assuredly NOT following the agreement) dictating to the U.S. how high to jump and when on green energy. But you see, between that and everything regarding the Covid Wuhan flu rot, the Biden Administration plans to listen to and follow SCIENCE!

Which, according to the memo, means mask mandates for federal properties and inter-state travel. Couple of things here with that. A. mask mandates are ALREADY in place. B. inter-state travel? Airlines already require masks? Does the Biden crew mean that there will be checkpoints at the borders of every state to determine if people driving from one state to another are masking up while in their own cars??

Also on the Covid agenda is more testing and tracing, community vaccination sites all over the place, and adding MORE paid sick leave for those who get the bug and have to stay home. In my community there are testing sites all over the place, some within a block of each other. Community vaccination sites? If the current state rollouts are any indication, this will be a failure waiting to happen.  Paid leave? Who pays for that? Oh, the business does? Which is why there are serious Trojan horses embedded in every action Joe will sign starting Wednesday.

The The 8th
headline paragraph pic.twitter.com/pBAglaIsqv

Currently, as the Biden team announces that they are going to hand over citizenship to well over eleven million illegal immigrants, another migrant caravan is on its way with their OWN demands of Biden.

“‘We are going in search of a better future, a job so we can send a few cents’ back home,’ Ramírez said. ‘We are trusting in God to open our path, Biden is supposed to give work opportunities to those who are there [on American soil].'”

So, they waltz over the border and a job will magically appear? That isn’t how this works.

Here we go again. What could possibly go wrong? https://t.co/YSqanoRp83

Secondly, Biden has already broken more than one campaign promise regarding how he plans to wipe out anything that President Trump did regarding illegal immigration.

Joe Biden, with all these executive orders and “aggressive legislation”, is now the new NEW man of action! Which also includes a weak foreign policy. He will rescind President Trump’s travel ban. For those following, it was a travel ban put in place against several key countries that are terrorist breeding grounds. But, of course, all the media is continuing to define it as the Muslim Ban. That good ole media narrative, let’s ignore the very real terrorism concerns which led to the travel ban in the first place and instead work to convince the world that this was a ban on all Muslims. The narrative continues.

Meanwhile, as this shows from a couple of days ago, Chuck and Nancy are super duper excited about all this new stuff they’ll get to pass!

The Biden-Harris team's emergency relief framework is the right approach

Remember when the media promised they’d be kinder and gentler with Biden than they were/are with President Trump? I had to laugh at this from the New York Times.

“After a lifetime in Washington, the restless, gabby man of consuming ambition who always had something to say and something to prove seems to have given way to a more self-assured 78-year-old who finally achieved his life’s dream.

He did not feel the need to chase the cameras over the past 10 weeks — indeed, his staff has gone out of its way to protect him from unscripted exposure for fear of any stumbles, a goal that will be harder once in office.

He’s “calmer” now because he isn’t under the anxiety and massive pressure from campaigning…from his basement.

The executive orders and the legislation being proposed will be a detriment to this country. The media will try to sell it, but everything Joe does will ensure we’ve bought a pig in a poke unless we demand to see what’s in it before it’s passed.