Next post
Biden Goes For Guns After Deputies Shot 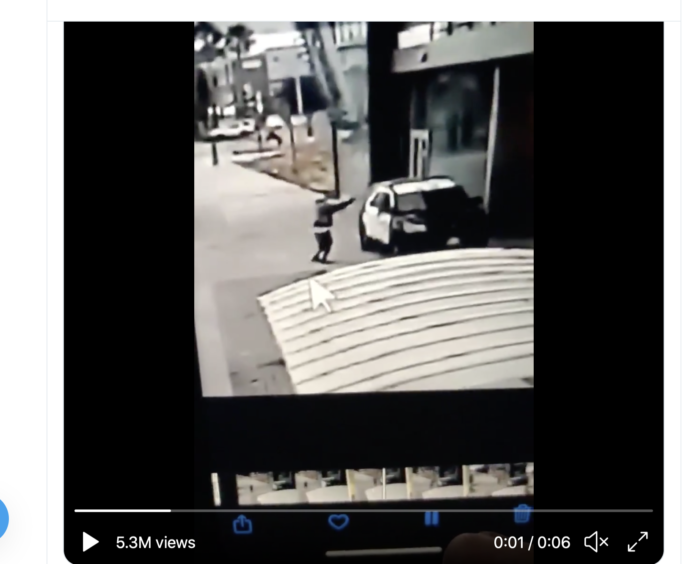 Will the Left ever disavow Black Lives Matter over attacks like this? Two cops were ambushed and shot last night outside a Compton train station.

“Two Los Angeles County Sheriff’s Department deputies are “fighting for their lives” after they were shot in the head in an ambush at the Metro station in Compton, officials say.

The incident happened Saturday at the Metro Blue Line station at Willowbrook Avenue and Compton Boulevard around 7 p.m. The location is a short distance from the Compton sheriff’s station.”

Both deputies are young. One is 24 and the other is 31 with a 6 year old child. Both were sworn in just fourteen months ago and work for the department’s transit services bureau.

The attack was caught on video. It’s tough to watch, but necessary.

Update: The gunman walked up on the deputies and opened fire without warning or provocation. pic.twitter.com/cBQjyKkoxJ

Why is it necessary to see this? Because this was an outright unprovoked attack on our law enforcement. There was no reason for this attack. Period.

Infuriatingly, we are seeing attacks like this as well as attacks on police stations themselves (Portland and Minneapolis as prime examples) being applauded and encouraged by the Left. The media themselves have gone into pretzel contortions to insist all the protests and the Black Lives Matter protestors are mostly peaceful and oh so misunderstood.

Will the left, Democrats and media support the Black Lives Matter thugs who tried to storm the hospital and were blocking the entrance to the Emergency Room?

BLM protesters trying to breach St. Francis hospital where two officers are fighting for their lives after being shot in an ambush.
Part 1 pic.twitter.com/0x3uj04ahW

Let’s see, two transit cops are, according to these BLM jackasses, notorious gang members. Cops at the hospital are called pigs to their face. Watch additional videos by these “peaceful” punks here.

“We hope they die!” Such an interesting and violent narrative. You want to know what Black Lives Matter is? THAT is who and what they are. They WANT violence! They WANT all police officers dead. They embrace lawlessness!

Black Lives Matter is NOT a peaceful movement.

In a sane world, Black Lives Matter blocking entrance of a hospital to cheer for the death of a 31 year old mother of a 6 year old boy would be the end of a movement. pic.twitter.com/V4bOV3LJ0K

Exactly. We have had protests all over the country for MONTHS. What has been the response from the Left? Appeasement. Yanking funds away from the police departments. Disbanding entire police divisions, hello De Blasio, and letting the violence go unchecked and essentially rewarded has and very likely will lead to more incidents like this if we don’t stand up and say ENOUGH.

The LA County Sheriff department serves an immense area and a population of over 10 million people with only 18,000 employees, yet they too are facing calls to “defund the police.”

“The LA County Board of Supervisors voted to put a measure on the ballot shifting up to $490 million of the county’s budget to social services in a move the sheriff likens to partially defunding his department.”

The NBA and the NFL are two professional sports organizations who are blatantly supporting Black Lives Matter. Their continued silence regarding the violence in our communities and against our police speaks volumes. The Dallas Cowboys weren’t allowed to wear anything in support of the five Dallas cops who were ambushed and killed, but this year the entire NFL is ALL about BLM. With hypocrisy on blatant display like that, do you think anyone from the NFL will speak up in support of two LA Sheriff deputies who were ambushed and shot last night? I’d be shocked if they did.

Answer: probably zero, which is why so many of those ungrateful, undereducated fools deserve contempt for their “social justice” stances

Will any Democrat politicians denounce the BLM activists who tried to get into the hospital while yelling that they hoped the two cops would die?

It took over twelve hours for Gavin Newsom to say something about this crime, and all he did was send out a lousy tweet. Same with Eric Garcetti, the LA Mayor. Were either of them asked about the ambush this morning on the Sunday talk shows? Were either of them asked about the BLM creeps at the hospital? Nope, both of them instead spent their time bitching about climate change, wildfires, and Trump being MEAN!

Yes, tt was a rhetorical question. While two cops are fighting for their lives, don’t expect the political, media, and corporate Left to disavow Black Lives Matter, or Antifa anytime soon.You see, the left LIKES the violence and destruction that has been going on since May. If they didn’t like it, all the Democrat leftists would’ve spoken up LONG before this and shut the violence down.