Columbus Stand Off In Chicago: Protestors Tried To Topple Statue

Columbus Stand Off In Chicago: Protestors Tried To Topple Statue 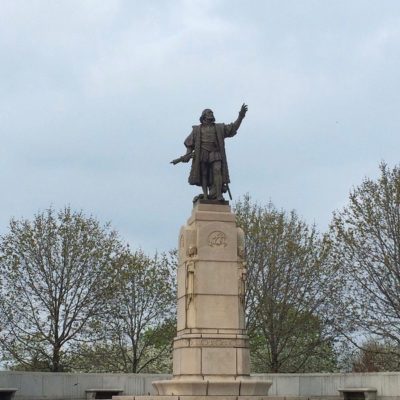 Yes, Christopher Columbus was part of our history. But we are living in a world where if people don’t like an element in history, they see fit to tear it down. The latest comes to us from Chicago last night, where protestors attempted to topple the Columbus statue.

Columbus has been attached in Minneapolis, Richmond, and Baltimore. Columbus was beheaded in Boston:

Last night, Columbus was the target of protestors in Chicago’s Grant Park:

At one point, more than a dozen demonstrators ware holding onto the rope as the crowd cheered on, ‘Columbus was a murderer. Columbus was a thief.'”-Alice Yin, The Chicago Tribune

Chicago police were in a standoff around the statue. Some hit demonstrators with batons while “demonstrators” and “protestors” (as our news media calls them because they flat out refuse to call them rioters) threw bottles and fireworks at Chicago PD.

We all remember the stories of 1492, when Columbus sailed the ocean blue aboard the Nina, the Pinta and the Santa Maria in our elementary school days (circa 1977). Much has changed since then about Christopher Columbus’ “discovery” of America. We get it. He was a Eurpoean slave owner. He exploited Native Americans. He brought disease (measles, to be exact) to the New World. Christopher Columbus is a hero in some circles, a villain in others. On the surface, I understand why some individuals may be opposed to calling a certain day in October every year, “Columbus Day”. I understand why they may opt for calling the day “Indigenous People’s Day”.

What I do not understand is people harassing local police departments in their efforts to maintain law and order in their cities because spoiled little white kids behind all of this mess want to delete the history of our country-the good, the bad and yes, the ugly-because there was a hell of a lot of that (and it’s getting uglier by the moment).

How about “criminals assulting officers guarding Columbus statue”….. There, fixed it

And from the looks of things, it does not appear that the “protestors” were social distancing, either. Has the news mentioned, recently, that there is a “pandemic” happening? I don’t know. Have y’all heard that somewhere? (Asking for a friend.) Of course, Antifa thugs were at least six feet apart when they hurled bottles and fireworks at Chicago PD! It wouldn’t be their fault if COVID-19 spreads at all. They were wearing hoods and nasty bong-water-soaked bandanas they found in their mom’s basements. And if COVID-19 spreads in Chicagoland again? Mayor Lightfoot will shut Chicago businesses down. STAT. Except her personal hairdresser because “she’s a public figure“.

All this to protect a statue? All this crime ppl steadily complain about “Chicago!” having yet the cops have enough time to devote to surrounding a Columbus statue? 🤦🏿‍♀️

Say what you will about Christopher Columbus. But Mayor Lori Lightfoot is Rahm Emanuel 2.0.

Showing up when there’s a murder or a shooting or any other violent act and being the first time you’ve set foot in a neighborhood, without knowing any of the people, the relevant stakeholders, you’re never going to win the trust of the community that way to be able to solve crimes, because they’re not going to view you as legitimate.”-Lori Lightfoot

So much for the support of Chicago PD. And now, while Chicago’s mayor sits silent on the rioting surrounding overthrowing this statue, the Twitter population feels compelled to spew their criticism of a police department that has been basically told by their city mayor that they’re not legitimate. That they cannot be trusted. That neighborhood residents need not cooperate!

The attempt to vandalize the Christopher Columbus statue was part of a rally planned for Black and Indigenous people that began earlier Friday evening at Buckingham Fountain. Many called for the defunding of the Chicago Police Department, saying the money should be invested in neighborhoods. Let’s guess…more Planned Parenthood clinics? The event was organized by Black Lives Matter Chicago, Chi-Nations Youth Council, Black Youth Project 100 and other groups. From blacklivematterchicago.com:

We fight for justice with families most impacted, while working to create just and equitable systems.

Part of the way to end state violence and criminalization of Black communities would be by allowing law enforcement to do their jobs. You guys have kind of lost your argument when you started hurling bottles and fireworks at cops. Want to really end “state violence, criminalization and oppression of Black communities”? Let the police do their jobs. When one year-olds, three year-olds and 10 year-olds are dying in your streets, when you have a pandemic that came in from another country and are advised to stay the hell home you have no business (like you say to the rest of us) to be in the streets hurling fireworks(manufactured in that same country who brought us COVID-19.

But if you militant idiots must go out and protest and “stand for” something, think about this. When your city has 63 shootings and 16 fatalities in one weekend alone, in marginalized neighborhoods, we think there are bigger problems. Let those statistics, and the people in office in your cities, who let that happen regularly and manipulate the narratives around this be the source of your outrage and anger in Chi-town and any other city for that matter. Not some Italian slave owner (who brought in measles) from centuries upon centuries ago.