Previous post
Riots Across America: No Longer About George Floyd 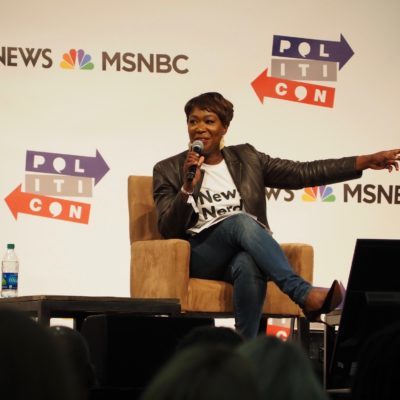 When MSNBC’s Joy Reid is not running her mouth on homophobic blogs, she is tweeting in defense of Antifa. Seriously. One may wonder, why on Earth is this woman still on the air?

Reid since apologized for being dumb, cruel and hurtful. But in all honesty, we do not think she can help the dumb aspect. Cue in Joy Reid for her professional, journalistic point of view:

Y’all do realize “antifa” is just short for “anti-fascists…” right? As in the people who confronted the nazis in Charlottesville… why would they try to burn and destroy black communities? https://t.co/XanvvW8mCR pic.twitter.com/m4RZMkt2GR

This should not need to be said, but just traveling to a protest from out of state or out of town does not make one an “outside agitator.” Traveling to support a march for a cause is a long civil rights tradition. It’s the armed & chaos-agent extremists who don’t belong.

Um, Ms. Reid? Wouldn’t those armed chaos-agent-extremists be the very Antifa thugs you choose to defend? According to ADL, this is Antifa:

Today’s antifa argue they are the on-the-ground defense against individuals they believe are promoting fascism in the United States. However, antifa, who have many anti-police anarchists in their ranks, can also target law enforcement with both verbal and physical assaults because they believe the police are providing cover for white supremacists. They will sometimes chant against fascism and against law enforcement in the same breath.

While some antifa use their fists, other violent tactics include throwing projectiles, including bricks, crowbars, homemade slingshots, metal chains, water bottles, and balloons filled with urine and feces. They have deployed noxious gases, pushed through police barricades, and attempted to exploit any perceived weakness in law enforcement presence.”-ADL

All of this in the name of peace, equality and anti-racism, apparently. This destruction is for the greater good, you see. Even if it means torching a business that a black firefighter spent his life building. Up in flames it goes. A war casualty in the days and the lives of Antifa jackasses.

Out of the shadows they came, infiltrating Minneapolis and a number of our American cities. They came donning all black and gas masks, shields, helmets and carrying bottles of milk to counteract the effects of tear gas and pepper spray. These “warriors” who are “fighting for justice”, go straight to the front lines to antagonize and escalate conflict. Why? Reid says they’re “fighting” for a peaceful and just society. The troops have been deployed.

Reid all but claims Antifa is a peaceful lot demonstrating and desiring justice for George Floyd. In several other Tweets on her Twitter account, however, she also claims the violence we see in the city streets is engineered by racially-motivated, far-right racists because Trump. So, in essence, Antifa is “pretending” to be Antifa. Really? Take a look below. Do these folks sound like Trump supporters?

While Reid justifies the Antifa movement and traveling across state lines to attend a “peaceful” protest, Reid is also claiming that the Antifa we see is not really Antifa. The Antifa we see throwing bricks, burning down businesses, defacing property, shoving their middle fingers in front of the cameras are all “agents” deployed by Trump himself to make Antifa look bad. George Soros stands silent. The double-speak is making my head hurt here.

Just like that, the fascist, anti-capitalist, mask-shaming little douches that will look at you cross-eyed for not covering your face whilst removing their masks to spit on cops have emerged out of quarantine from mom’s basements. Cities that are still on lockdown, set a curfew for these kiddies to be home by a certain time (which, color us surprised, they did not listen to). In the meantime, honest, well-meaning residents are still on lockdown. Some are in the throes of economic turmoil while they sit, watching the news and watching thugs break into and loot their businesses that are closed because state governors are riding the power train. All in the name of honoring George Floyd?

Is our journalistic community really justifying Antifa to combat the injustice of what happened to Mr. Floyd? Joy Reid sits behind an anchor desk and complains of injustices, justifying Antifa and spinning a web of division whilst donning her $900, red-soled, Christian Louboutin stilettos. Does anybody else see anything wrong with this picture? Isn’t it time anchors, “journalists”, talking heads like Joy Reid be held accountable for this sheer irresponsibility and inciting this violence? Let’s go ahead and add Antifa apologist to Reid’s resume.