Next post
SpaceX Takes Off For The Final Frontier 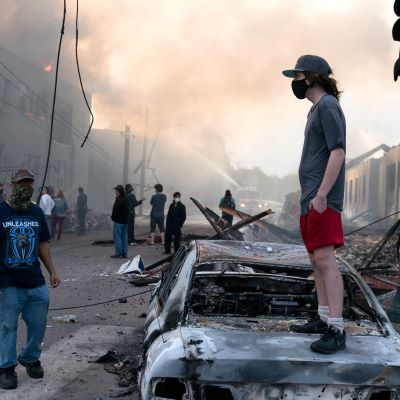 In the last few days, we saw the horror of police abuse up close and personal as the video of Derek Chauvin and his police pals murdering George Floyd circulated on the Internet. But in what we are also seeing is justifiable outrage turn into opportunistic riots and looting.

Thankfully, Chauvin has been arrested and charged. He will see his day in court, and his wife filed for divorce. Many on the left will tell you that people are fed up, that they’ve had enough of police and government abuses, and that the violence and destruction are somehow warranted.

Some even compare the ruin to the Boston Tea Party.

First, I want to address the Boston Tea Party comparison, because it is such a disgusting juxtaposition of unrelated acts.

Much like in the Ferguson riots, the individuals and businesses targeted in the nationwide riots are innocent business owners, private property, and people in the community who provided supplies and jobs, we well as built affordable housing for the needy.

A six-story, 190-unit affordable housing project had been slated to open in the spring of 2021. It now will not, because rioters burnt it to the ground. What did this building do to perpetuate the system that allowed George Floyd to perish at the hands of several murdering cops? Nothing.

A beloved science-fiction bookstore, Uncle Hugo’s, in Minneapolis has been torched. The owner is pretty sure that the insurance company is not going to cover the damage from a civil insurrection. How was a book store responsible for the murder of George Floyd? It wasn’t.

Why did an Amazon store in Seattle warrant destruction after an outrageous, violent, unjustified death in Minneapolis? It did not.

How does this compare to the Boston Tea Party? Although it’s true that mob mentality did take over in a limited fashion, the colonists’ rage was specifically directed against at a British government-enabled monopoly that benefited from the Tea Act. The founding fathers detested mob violence, while these people seem to take every opportunity to revel in it like swine in mud. John Adams wrote to his wife Abigail in 1774 that he hated the mob mentality.

“These Tarrings and Featherings, these breaking open Houses by rude and insolent Rabbles, in Resentment for private Wrongs or in pursuance of private Prejudices and Passions, must be discountenanced.

There is, however, evidence to suggest that the Sons of Liberty were not the only participants in the Boston Tea Party, and this is where the events once again converge, because apparently a bunch of out-of-staters invaded Minnesota just for the purpose of taking the opportunity to exploit these riots either for personal gain, or because it provided a bit of fun and an outlet for their misplaced rage.

Holly Nehls, writing in a University of Tennessee publication, states that “for many participants, mob mentality was present, particularly amongst the apprentices of tory masters as well as amongst merchants, resulting in the destruction of property that was not originally intended by some participants.”

The Boston Tea Party united people from various classes, from farmers and carpenters to merchants and barbers. Historian Arthur M. Schlesinger states, “But it is clear that many merchants, who went into the movement against the East India Company with the intention of resorting only to peaceful opposition, were swept by the surge of popular feeling into measures of which their best judgment disapproved.” Merchants were trying to rectify the situation in a way that would not cost them money or result in Parliament’s wrath. However, mob mentality took over and they destroyed property, which they did not originally intend to do. Gary Nash agrees that some merchants were fearful of the actions and tried to correct their wrongs. He writes, “Shrinking from these displays of popular force, the merchants tried desperately to head off a crisis with England by subscribing money to pay for the destroyed tea.”

Will these savages nationwide reimburse innocent people for their loss of livelihood and destruction of property? Likely not.

Do they even know the cause of the demonstrations? Do they even know George Floyd’s name? Or were they, as one chronicler wrote about some of the Tea Party participants, “chiefly extempore volunteers, who could not resist the temptation of the moment, though unprepared to act to the best advantage?”

There are several signs that the nationwide riots were opportunistically conducted throughout the nation.

Although I understand the outrage of Americans all across the country at the murder of George Floyd, I don’t see a collective trauma in their demeanor when they casually and opportunistically throw objects through store windows and set businesses in the community on fire.

The destruction is celebratory and casual. The protesters who marched a few days ago were solemn, they wept, they held hands, they showed signs with George Floyd’s name, ensuring that he is commemorated and remembered.

They did not gleefully riot, steal booze and loot anything they could get  their paws on in ransacked stores.

I’m sorry, but these animals don’t strike me as grieving. They don’t even look enraged. They look happy at the opportunity to cause some destruction and are performing their celebratory dances on the ransacked remains of property that had nothing to do with the murder of George Floyd.

Violence against regular people has nothing to do with the murder of George Floyd.

The destruction of community businesses – many of which offer job opportunities and goods and services to the very people who went on a destructive rampage against them – has nothing to do with the murder of George Floyd.

The murder of George Floyd was appalling enough, and I’m hard pressed to find anyone who would defend the swine that held him down as he gasped for his last breath. As a matter of fact, most comments I’ve seen from the right stand with the citizens against police abuses, and patriots have an established record of opposing state force.

The family of George Floyd also implored the community for peace, even as riots broke out all over the country. “We also cannot sink to the level of our oppressors, and we cannot endanger each other as we respond to the necessary urge to raise our voices in unison and outrage. Looting and violence distract from the strength of our collective voice,” the family’s public statement said.

Opportunistic riots are not justice. They are a degradation of society that only hurts the cause of holding state abuses in check.

Featured photo: A man stands on a burned out car on Thursday morning as fires burn behind him in the Lake St area of Minneapolis, Minnesota; Wikimedia Commons; CC 2.0