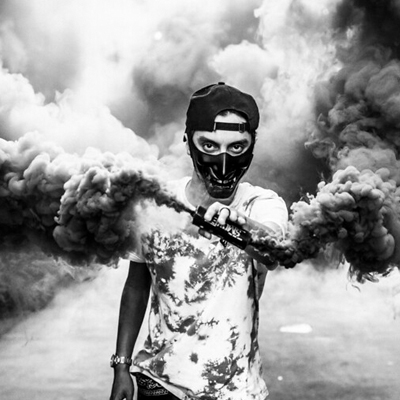 by Kim Hirsch in Headlines 15 Comments

On Saturday, protestors took to the streets to express their anger over the death of George Floyd. Those protests turned into riots, and cities across America turned into infernos.

But this is no longer about George Floyd. This is about people who want to annihilate every shred of order.

Unlike protestors in Hong Kong, who love their city and want to to remain free from Communist oppression, American rioters detest their nation. So they exploit the wrongful death of a black man as an excuse to destroy all that is good about her.

What is happening to my country?

In New York City, riots occurred over all five boroughs, with Brooklyn as the hot spot for violence. Agitators blocked traffic, smashed store windows, and set fire to police cars. They also threw bottles and other debris at police officers. Vandals even desecrated St. Patrick’s Cathedral, spraying “F*CK,” “BLM,” and “No justice no peace” on the outer walls.

One hooligan thought that assaulting an officer with his skateboard would be . . . smashing. He discovered otherwise.

Others blocked traffic on the Brooklyn Bridge.

Despite all this, however, NYC Mayor Bill de Blasio didn’t stand up for his police force. Instead, he appeased the rioters, and warned law enforcement whom he thought were acting too violently:

“Any aggressive act toward a peaceful protester sends exactly the wrong message. We will not accept that kind of behavior. It is unacceptable.”

On the other side of the country, in Los Angeles, Mayor Gil Garcetti decided to call a curfew lasting from 8 pm to 5 am. But he said there was no need for the National Guard on Saturday. “This is not 1992,” he said, in reference to the Rodney King riots. He also asked Angelenos to “de-escalate” and “show our better angels.”

But protestors were more about anarchy than angels. They burned police cars. They also looted Nordstrom, along with shoe stores, clothing stores, and an Apple Store. 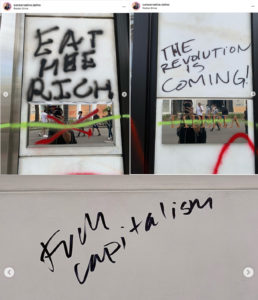 Finally, Garcetti realized that the protestors were not about to “de-escalate,” so he called on the California National Guard for assistance.

The California National Guard is being deployed to Los Angeles overnight to support our local response to maintain peace and safety on the streets of our city.

And then there’s Chicago.

According to an anonymous Chicago policeman, the protestors were beating police officers. What’s more, the agitators weren’t from Chicago, either.

“Officers are under attack – and it’s going to get worse.  Rioters are coming in by the busload and they aren’t letting us do anything to stop it.”

And just like agitators did in Los Angeles, the Chicago crew attacked high end shopping areas, such as Water Tower Place, and stores on the legendary Magnificent Mile.

The Nike store was a popular site for looters.

The blacks of america have every right to ask for their rights. But is this the way? -NO!#chicagoprotest #ChicagoRiots #riots2020 #USArevoltspic.twitter.com/VQP7t0OorJ

They also set fire to an over 100-year-old photography business.

Central Camera. Here for over 100 years. One of the last photography stores in the city. A photogs staple. Shopped here many times. #chicagoprotest #ChicagoProtests pic.twitter.com/NQXybFPS2E

Plus a rioter stomped on and broke a glass awning on a restaurant while others cheered him on.

This guy stomped through a glass ceiling at a restaurant in downtown Chicago and then ran like a bitch when confronted by other protesters.

Even worse, agitators dragged police officers through the streets. During the riots, dozens of officers were injured, including one with broken bones.

CHAOS: Police officers dragged through the street in Chicago

So finally Chicago Mayor Lori Lightfoot, like Garcetti in Los Angeles, announced a 9 pm to 6 am curfew.

“I want to express my disappointment and really, my total disgust at the number of others who came to today’s protests armed for all-out battle.”

“We can have zero tolerance for people who came prepared for a fight and tried to initiate and provoke our police department.’’

Well, about that curfew. A quick listen to a police scanner tuned to Chicago police frequencies showed that rampages were still going on at midnight.

But let’s face it: this is no longer about George Floyd, as if the riots were ever about him in the first place.

I have yet to see any conservative on social media or on national news media support what happened to Floyd. In fact, even the New York Times noted that top conservative voices have condemned Floyd’s death and the brutality that caused it. Judge Jeanine Pirro of Fox News Channel said that “this man who put his knee on the neck of George Floyd does not deserve to be free in this country.” Rush Limbaugh said that he “can’t find a way to justify” what the officer did to Floyd.

And even President Trump said on Friday night:

“They were protesting in honor of a man, George Floyd, where something happened that shouldn’t have happened.”

In actuality, rational Americans on both sides of the political divide agree on this: George Floyd died a savage and unnecessary death at the hands of a rogue cop. And they would also agree that Americans have the constitutional right to peacefully protest that death. Red, blue, Republican, Democrat: for once we’re truly united on this.

Yet agitators who despise the country have exploited Mr. Floyd’s death in order to undermine Donald Trump’s presidency. And as a bonus, they also want to undermine America herself, because they loathe her and all her traditions. They want to create a system in which their knees would be on our figurative necks, killing our rights to speak out, worship God, or own property or weapons.

This is not about George Floyd anymore. This is about how much the Left hates us.