Previous post
Biden Admits There Is A Border Crisis

Next post
Maxine Waters Tells Protestors To "Get More Confrontational" 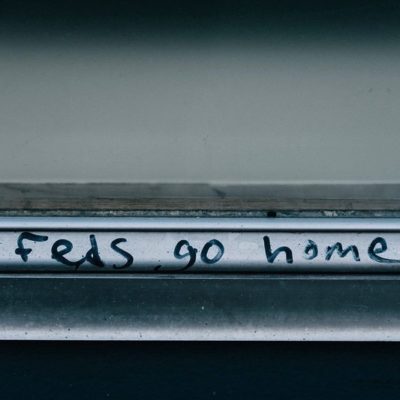 Protestors are the new victims in the latest narrative USA Today and our mainstream news outfits are churning out. Their justification for the argument goes something like this:

The bills would ban “taunting police” and “camping” on state property, expand activities that are illegal during a riot, and impose harsher penalties for blocking traffic. There are 93 such bills proposed in 35 states.

These bills talk about ‘riots,’ but the language that they use is so sweeping that it encompasses way more than what people imagine.

These “bills” will (gasp) give drivers legal protection if, say, he or she should run a protestor off and unintentionally hitting said protestor after said protestor was determined to be blocking traffic. There are states such as Oklahoma, Iowa, Missouri and Indiana.

These “bills” will also (gasp again) do this in some states and cities who have protestors in their streets:

How racist and um, white supremacist of them. How dare they. But wait…there’s more:

Bills in Arizona, Indiana, Minnesota and Oregon would strip public assistance, such as food stamps, welfare and unemployment compensation, from people convicted of participating in a riot or inciting one.”–Tami Abdollah, USA TODAY

Elly Page calls this silencing of protestors “devious”. These bills are targeting marginalized communities. Protestors are the victims here. Attacking these protestors is attacking the BLM movement. The “largest assembly of non-Black people demanding justice for Black people I have ever seen in this country-young, old, poor, immigrant, women, men, trans, gay people”, according to Marcus Anthony Hunter, a professor of sociology and African American studies at the University of California at Los Angeles.

Of course, this sentiment against protestors spawned from the Trump administration. The article cited also specifically calls out Ron DeSantis and Measure CS/HB 1-Combatting Public Disorder.

Combating Public Disorder; Authorizing specified elected officials to file an appeal to the Administration Commission if the governing body of a municipality makes a specified reduction to the operating budget of the municipal law enforcement agency; providing that a municipality has a duty to allow the municipal law enforcement agency to respond to a riot or unlawful assembly in a specified manner based on specified circumstances; reclassifying the penalty for an assault committed in furtherance of a riot or an aggravated riot; prohibiting cyberintimidation by publication; prohibiting a person from willfully participating in a specified violent public disturbance resulting in specified damage or injury; creating an affirmative defense to a civil action where the plaintiff participated in a riot, etc.”-flsenate.gov

Now, in our circles, this sounds rational. Protestors who become rioters need to be penalized. A protest is no longer a protest when it becomes a hostile occupation and a riot. But, I guess those who want to spin this narrative and the government officials who turn the blind eye are completely oblivious to the long-term effects these protestors have on the communities they occupy.

Come again, protestors? Whose rights are being violated? Who are the TRUE victims here? But go on, USA Today, please…

Known as Measure HB 1 — a sign of its high priority for lawmakers — it may have been the most divisive bill to face lawmakers this session. Proponents argue the bill is necessary to protect businesses and communities from the violence of the mob. Opponents have called it a racially-tinged attack on free speech.”-Tami Abdollah, USA TODAY

Antifa have called for the creation of an autonomous zone at the park where there was a police-involved shooting death of a reportedly armed man. Antifa also announced that BLM is banned from participating. Here’s why: pic.twitter.com/IQmVhnQ1iW

Seems the “comrades” (translation in modern journalistic speak-protestors) are no longer comrades in arms.

Antifa have called for the creation of an autonomous zone at the park where there was a police-involved shooting death of a reportedly armed man. Antifa also announced that BLM is banned from participating. Here’s why: pic.twitter.com/IQmVhnQ1iW

Step aside, BLM protestors, the white saviors of Antifa are going in after a day of video games, doobies and Doritos! These comrades will take this battle for you. This is not your fight. They don’t want any black-folk-troublemakers at their occupation. All y’all do is bring megaphones and exploit white guilt of Portlanders! I mean, white protestors have rights, too, don’t you think? How dare the black “swoops” (whatever the eff a “swoop” is) ruin any wimpy white boy’s glory of torching a virtue-signaling Apple store or spray-painting “no more history” on the Historical Society’s windows? Why should BLM have all of the fun? White social-justice warriors need to feel important, too.

And, Portland, among other U.S. cities, continue to be oozing cesspools of the white “woke” of Antifa. Dangerous, littered with trash, tents, drug use and rampant homelessness thanks to left-wing policies not criminalizing these “protestors” bringing on the destruction. According to the mainstream media, these proposed bills to criminalize these “protestors” are violations of free-speech? Let’s break it down, shall we? If you are a person who took the lead from your jacked-up city council and voted for the defunding of your local police department in favor of “social workers”, you may be a white liberal and I have absolutely no sympathy for you right now. You’ve elected to live in that squalor. As far as protestors go, if you can protest under the cover of night, with explosives, weapons and ammo, and cause destruction to a neighborhood that is not even yours, and you get caught-you shouldn’t be eligible food stamps, welfare and unemployment compensation. And, if you’re blocking a major artery during rush-hour, while honest, hard-working people are trying to get to their day jobs (while you’re attempting to collect food stamps, welfare and unemployment compensation), you waive your First Amendment rights and may just get run over. Move the eff out of the way!

The news media still insists upon calling you protestors and victimizing you. They are the devious ones. Many a fool will believe them but we know what you all really are. You all are not victims. You are rioters, racists, fascists and losers.

There, USA Today, I fixed it for you. You’re welcome.