Previous post
Op-Ed: We Cannot Lose Hope In Our Republic

by Narcissi Craig in media 2 Comments

Facebook will mindwipe the protest events on Capitol Hill. Yet one more brick in their big wall of censorship. It’s not Mission Impossible, but with help from Bureau of (No)Information your posts and comments will self destruct in…3…2….

The number one is an important number in America. It’s our First Amendment, the most valued and exercised from the Bill of Rights. Specifically, Freedom of Speech, and Freedom of Assembly. Americans are very protective of these two rights.

Unless those rights are exercised by people or groups deemed unfavorable. Then, it’s okay to censor their views because, “they are bad people, with bad ideas!“. And here is where social media giant Facebook, in conjunctions with its subordinate companies, falls in line. They used to quietly censor groups, or individuals, commonly called “shadow ban”, where they bury posts well below “the fold” (to use newspaper parlance).

Shadow banning is when you are algorithmically being kind of shut down, and that often has to do with, particularly, the content that you are posting,” Ms. Stephens said. “Maybe it doesn’t violate the terms of service, but they make it so other people can’t see that content.”

After the events at the Capitol Hill protest, Facebook has dropped the pretense of shadowbanning, and decreed that it will remove all content it deems inappropriate to the platform.

So, what is inappropriate according to Mindewipe Inc?

First, we have been searching for and removing the following content:

With these changes, Facebook is literally using the platform to censor the most important parts of the First Amendment, speech and assembly. Obviously they are hitting at the Second Amendment as well.

If you have ever been subject to mindwipe from Facebook, you understand that their computer and human review process leaves a lot to be desired. Now, imagine this system applied to the most hash tagged, and discussed topic in the history of social media.

I have no faith that their plan will be anything but a scorched earth approach.

Facebook has taken censorship to new heights by blatantly censoring the President of the United States.

As a part of this, we removed from Facebook and Instagram the recent video of President Trump speaking about the protests and his subsequent post about the election results. We made the decision that on balance these posts contribute to, rather than diminish, the risk of ongoing violence.”

To be clear, the most widely used social media platform in the world, where the users have generated billions for Zuckerberg, is censoring speech it deems wrong. The release continues,

In recent days and weeks, we have also taken enforcement action consistent with our policy banning militarized social movements like the Oathkeepers and the violence-inducing conspiracy theory QAnon. We’ve also continued to enforce our ban on hate groups including the Proud Boys and many others. We’ve already removed over 600 militarized social movements from our platform.”

You know who is missing from this list? ANTIFA, BLM, and all litany of anti-American groups. QAnon is a bunch of freaks. But I don’t see them claiming areas as “sovereign territory”, and setting up camps. No, that’s ANTIFA in Seattle. Ohh, Oathkeepers!! A group described as,

Oath Keepers is a non-partisan association of current and formerly serving military, police, and first responders, who pledge to fulfill the oath all military and police take to “defend the Constitution against all enemies, foreign and domestic.”

They are obviously hell bent on destruction! I remember their rioting over the summer. Oh, wait… sorry credit to BLM for those good times. Remember DC last summer? Bring the marshmallows, I’m sure it was really a peaceful cookout.

Meanwhile, at Facebook/Mindwipe Inc, ANTIFA has a great little page! Well, more than one, but you get it. And despite their antics this summer, the seem to be fully up, WITHOUT those stupid “fact check” comments. So note, it’s okay to spread vitriol if it’s directed at conservatives, and people who disagree with the ANTIFA “idea.” This is what their “idea” produces. Looks like “hate speech” to me, but what do I know? I’m only on my third Facebook timeout. 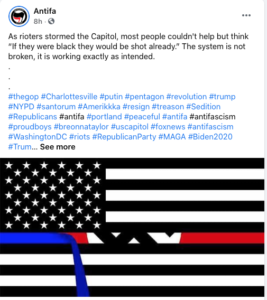 Don’t be surprised when you open your Facebook account, only to see violations stacked up. Or more likely, a day that didn’t exist. This folks is the absolute definition of censorship. Something Facebook has practiced in the past with the suppression of the Hunter Biden New York Post story. I can only imagine what they are willing to do for the incoming President and Congress.

Thank You Sarah, and Welcome to our INSTAPUNDIT readers 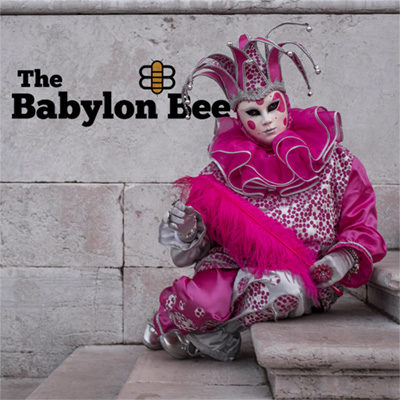