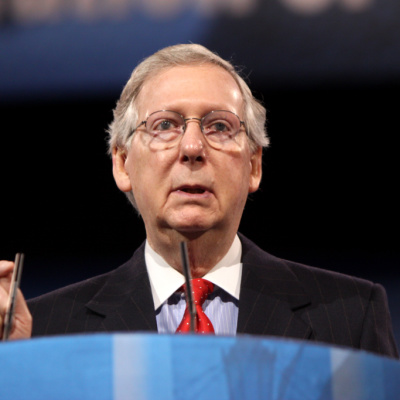 by Toni Williams in politics 28 Comments

Mitch McConnell. Senior Senator from Kentucky and currently Minority Leader, has always been problematic for me. He bends with the political winds. He is squishy. And, with his wife, Elaine Chao, always in Republican Administrations from Reagan to Trump, his tentacles are way too deep into the Swamp. On January 19, 2021, he ensured that he will be despised until the end of time, when he shivved us all in the back.

We are all well aware of the Capitol breach on January 6, 2021. A small group of filthy cretins burst into the Capitol building, destroyed our property, and caused the deaths of five people. The breach took place during a Trump “Stop the Steal” rally. Democraps were quick to seize on this opportunity to immediately call for a second impeachment of President Trump. Mitch McConnell put out a fairly balanced Tweet following the Capitol breach.

The ultimate blame for yesterday’s events lies with the unhinged criminals who tried to disrupt our government and with those who incited them. But this fact does not preclude our addressing the shocking failures in the Capitol’s security posture and protocols. My full statement: pic.twitter.com/2oJljGDiU8

Mitch is right. There were shocking failures in the security protocols by the security and leadership at the Capitol. In 2019, the forces managed to arrest 300 protesters during the Kavanaugh hearings. I could be way off base, but the crowd on January 6 looked to be about the same size. The Trump rally was well-known. If I were a person who believed in conspiracies I would think this was an on purpose. But, I am not a tin-foil girl so I am going with incompetent.

I watched most of the speeches on January 6. Rudy Giuliani and Donald Trump, Jr. may have gone too far with their comments. But, neither they nor President Trump incited an insurrection. All the majority of the 100,000 plus rally goers wanted was for an audit (not a recount; garbage in, garbage out) of the vote. There was no insurrection. A couple hundred criminals caused this ruckus. This was a planned in advance riot, complete with a BLM activist. This could in no way be laid at the door of Donald Trump.

Why did Mitch McConnell make this speech in the well of the Senate on January 19?

These words by Mitch are lies:

“The mob was fed lies,” McConnell said. “They were provoked by the president and other powerful people, and they tried to use fear and violence to stop a specific proceeding of the first branch of the federal government which they did not like.”

Yes, those words by McConnell were a shiv in the back of every Republican who ever voted so.

Just when Washington has a chance to turn the page, fresh signs emerged Tuesday that the past is not yet past. It is almost certain now that the Senate will hold an impeachment trial of President Trump next week.

Even worse, it looks probable he will be convicted of a single charge stemming from the Capitol invasion.

The history-making event got the green light from McConnell (R-Ky.) on his last day as Senate majority leader.

What changed between January 7 when Mitch McConnell wrote a balanced note and January 19 when he shivved us all and set Donald Trump up for Impeachment 2, the unConstitutional Sequel?

Mitch McConnel found our bottom rib and made an upward motion with the shiv, from the back, into our kidney. Mitch and his ilk are the cause of our failures. Spineless Republicans who prefer being in the minority to leading and making hard decisions. Trump showed us the way. We won’t go back. It’s almost tempting to move to Kentucky to vote against Mitch. I am going to stay in Tennessee to vote against Marsha Blackburn.