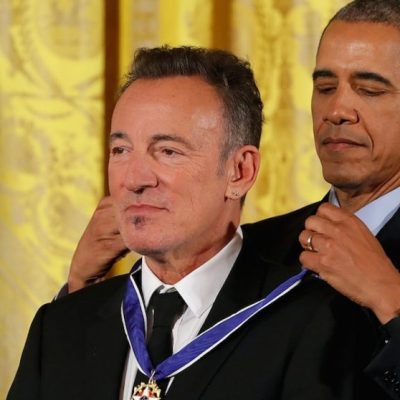 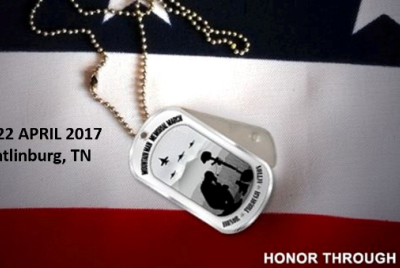 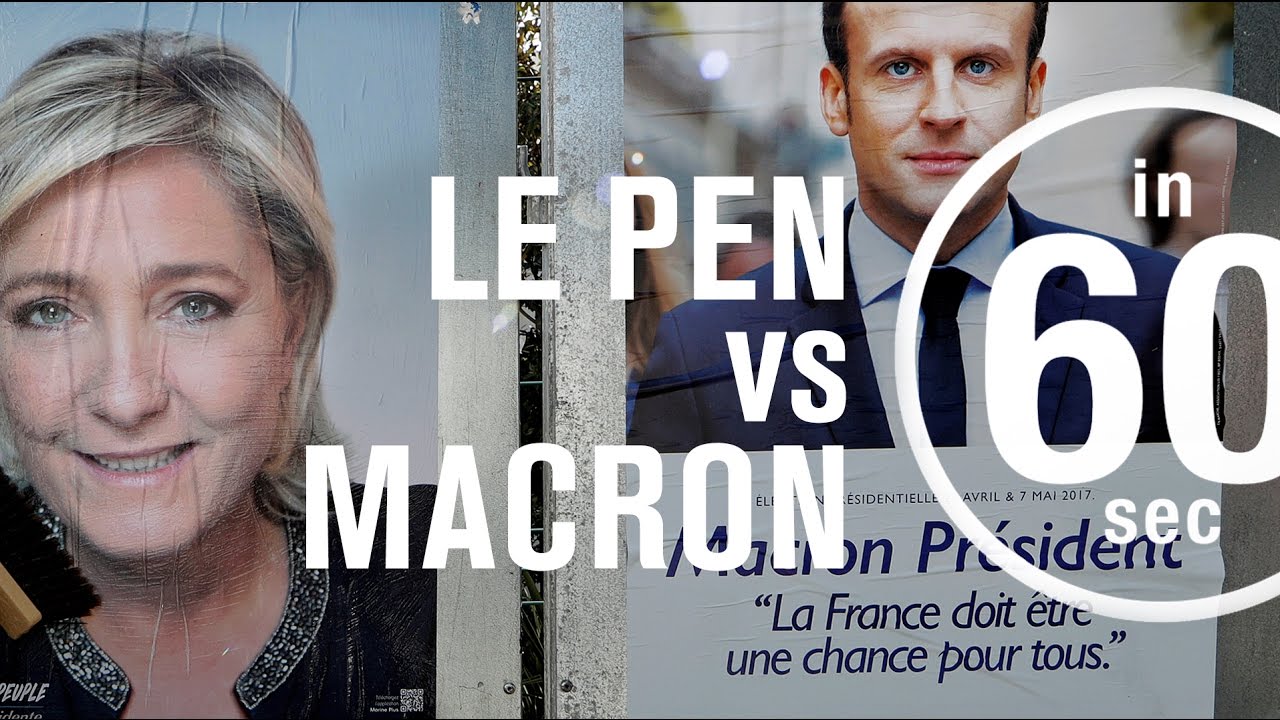 The media is hailing the contest for the French presidency as a battle of “center vs. far right.” It can be seen in almost every single news story reporting on the upcoming May 7th vote between National Front candidate Marine Le Pen, and En Marche candidate Emmanuel Macron.

Here is the AP’s opening paragraph on the story:

Centrist Emmanuel Macron and far-right populist Marine Le Pen advanced Sunday to a runoff in France’s presidential election, remaking the country’s political landscape and setting up a showdown over its participation in the European Union.

And here is Reuters:

Centrist Emmanuel Macron took a big step towards the French presidency on Sunday by winning the first round of voting and qualifying for a May 7 runoff alongside far-right leader Marine Le Pen.

This was how the New York Times headlined it on their website’s landing page. 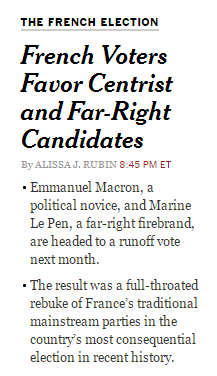 But because of the multifaceted nature of French politics, labeling Le Pen as “far right” and Macron as “centrist” is incredibly simplistic and reduces their actual positions to labels that aren’t actually accurate.

Let’s start with Le Pen’s National Front, which has been broadly compared to Donald Trump’s philosophy of populism and French nationalism. The party was started in 1972 by Le Pen’s father, Jean-Marie Le Pen. However, she has made the party fully her own, after expelling her father from the party in 2015 because of his anti-Semitism.

The National Front party is now described as a party pushing “national preference, law and order, and anti-immigration” as well as their own exit from the EU. The National Front, from what I have been able to sift out, seems far more traditionally conservative economically, while focusing on the very real issues of Islamic terror that have consumed the country over the last few years and deserve real action. ISIS has clearly brought the fight to France. Le Pen does not want France to be a battleground, so her party is labeled “anti-immigration” by the media. Will Le Pen be tough on Muslim immigration? Undoubtedly. But after hundreds of French dead claimed by ISIS – and France is about the size of Texas, so imagine losing over 200 people in 18 months in Texas to terrorism – and the results of yesterday’s election seem much more rational.

And now, the new political “movement” that isn’t really a party, En Marche, founded by Emmanuel Marcon last year as an alternative to his Socialist Party roots. Yes, he started in government as an appointee of current President Hollande. (The following quote is from the French paper Le Monde, translated by Google.)

Hoping to reach to “build something else” , to “try to advance” face “Company locks” , Emmanuel Macron, which has no card to the Socialist Party , said to want an “open movement” To which it would be possible to join while remaining adhering to a “other republican party ” . “I am from a left-wing government and I assume it totally with the values ​​I believe in and what characterizes me. But I want to work with people who now feel right, too , “said the 38-year-old former banker, Launched in politics by François Hollande . Appointed to the government in August 2014, the minister, very popular, has distinguished himself for his positions that disturb the majority.

So, Macron is a progressive socialist, who wants to reach out to the right and draw people in who agree with him. And for this, the media has labeled him a “centrist.” Truthfully, he’s more like Barack Obama than the friendly websites want to admit, though he took the popular appeal that Donald Trump skillfully used during the Republican primaries to push himself forward into this surprise win. But really, there is nothing within the En Marche platform that really draws a sharp contrast with the main French Socialist party of Hollande. Even the New York Times admits that Macron is not people’s first choice.

In the meantime, Mr. Macron appears to have been in the right place at the right time, with mainstream candidates falling on either side and a far-right candidate whom many in France cannot imagine having represent the country.

That does not mean that people favor him, but rather that he was the “least worst” vote: an especially weak position for a candidate with no real party base behind him.

This is so strongly reminiscent of the 2008 version of Barack Obama. He was a political neophyte on the national stage, without even one completed Senate term, that people seized upon as their ideal candidate because he said all the right things and looked the part. Emmanuel Macron may just be the French 2017 version of Barack Obama. The problem is that En Marche has only the celebrity of Marcon to build off of, because it doesn’t have any party apparatus or support as of yet (unless you count the nice labeling of the media).

Both sides agree that the upcoming election is deeply consequential for France.

FiveThirtyEight is cautiously optimistic for Macron, but admits that all the variables can’t be accounted for. That either candidate has gotten this far is a huge shift in French politics, regardless of the outcome. But the media is certainly being overly generous to Macron in calling him a “centrist” just because he’s a socialist who says he would work with the right wing.