Previous post
Democrats Are Forgetting A Lot These Days 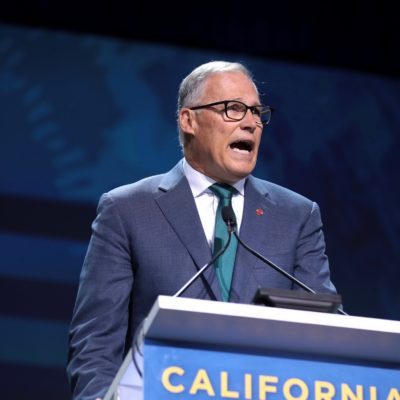 Lord of Washington State, king of the northwest, first of his name, Jay Inslee, mandated Washingtonians to wear masks yesterday but he’s infuriated. Why is Inslee infuriated?

Because Trump is trying to sabotage his effort in getting people across America to wear masks and it’s just…maddening! So is the logic behind wearing said masks all over the place…

That’s right. We Washingtonians have to wear masks anytime we go outside of our homes. Even in open air. Why? Because Washington State, like many states in the U.S., has seen a recent uptick in COVID-19 cases. This has nothing to do with people rioting up in Seattle at the CHOP, locking arms and blocking freeways on I-5 or gathering in random places at random times in protest. Now, all of sudden, this has nothing to do with clueless “What is CHAZ? Wash You Hands.” Inslee and Derpy Jenny Durkan and their total lack of accountability and leadership. This has everything to do with Trump trying to sabotage stopping COVID-19 in its tracks.

The Infuriated Mr. Inslee graced his loyal CNN fanbase yesterday with Wolf Blitzer and launched into an epic rant.

I wish he cared more about living Americans instead if dead confederates. His failure of leadership is not just being AWOL (absent without leave), he’s trying to sabotage the things we are doing in our states and arrest this pandemic.”-Jay Inslee

You can watch the interview here. (Is it me or does he sound a lot like Moira Rose of Schitt’s Creek when he says the word, “sabotage”? Sahbowtaaaage. I digress…)

Trump’s effort to sabotage this (illogical) effort is “maddening”, Inslee tells Blitzer. You know what’s maddening about your state, Governor? Ahhh..let us count the ways Washingtonians have been maddened over the past few months. Shall we go there? Yeah, I think we should.

If masks really worked, why was/is anything closed? Furthermore, 👇 pic.twitter.com/qCCeuLg51Y

I wish Inslee cared as much about his law enforcement officers as he does about his approval ratings.

Shall we talk about Washingtonians having their identities compromised by a West African cyber crime ring? Or maybe we should discuss how many businesses were forced to close their doors for the better part of THREE months? Or for grins and giggles, let’s count up how many families in Washington State went without a paycheck for months (some still unemployed) and had to or are having to rely on the compassionate nature of family, friends, neighbors and total strangers during this time to help provide groceries and daily necessities. Was TRUMP part of THAT sabotage? I think not. Who went AWOL here?

Governor Jay Inslee enabled and facilitated this economic hardship. Governor Jay Inslee hired an incompetent individual as Employment Security Commissioner. While Governor Jay Inslee shut down businesses to “stay home, stay healthy”, some small businesses had to permanently shutter their doors. Meanwhile, he encouraged protestors and rioters in the streets of Seattle. Now we have a surge in Coronavirus numbers and he’s infuriated?! Individuals camping out in the streets for days on end wearing filthy, cloth, glorified snot-catchers while shouting obscenities at the cops was their Constitutional right and we needed to respect that. Everyone else not seeing the value in a filthy, grungy piece of cloth to prove virtue or who wants to support their local restaurant, beauty salon, retail shop was “killing grandma”. That is rich coming from a guy who could have given two rat turds as he looked right past the unsanitary conditions in tent cities of the great Pacific Northwest for years before this pandemic happened. Come again, who went AWOL here? Right, we WASHINGTONIANS know. Jay the Jackass was too busy doing other “important” things. Like saving the climate. Campaigning for President. Going on late-night talk shows to talk about the awesome cannabis in our state.

It’s a simple fact. This is an administration-a President-who feels unconstrained by the truth-EVER-unconstrained by science virtually every day and just won’t listen to people who know what they’re talking about. This is infuriating. And now the President of The United States effectively tells people in my state that effectively they shouldn’t wear masks…that these don’t work. This is infuriating!”-Jay Inslee

What the hell is he babbling about? Effectively telling people that effectively…wait, what?! What’s a simple fact exactly, Jay? Infuriated Inslee would not know a simple fact if it hit him square between his wee-beady-little snake eyes. That is why this numbskull has to use cartoon drawings of dials to talk about state quarantine phases instead of the science and data of which he claims to understand. Washington is just not your state, Mr. Inslee. The fact that you think it’s just yours is…well..infuriating to say the least.