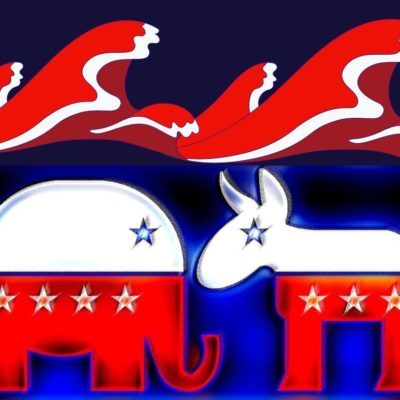 Never mind inflation and the economy or our porous borders, Democrats plan to keep abortion as the main focus going into the 2024 election. Why? Because the platform worked so well for them during the midterms, we suppose.

We did not have the “red tsunami” as anticipated this midterm, but the fatigue of voters grew apparent in days leading up to these elections. According to this from The Hill, Democrats say there is much to be done to keep the momentum going into 2024. Much of the emphasis from the Democratic Party will focus on abortion, they say. Because rights and the economy go hand-in-hand or something:

Patty Murray, (the Wicked Witch of Washington) has this to say:

Women’s reproductive rights [are] essential to the American people — American women and men. They rose and they said that in this election and we are here to protect that for them, and we will continue to do that, and I believe it will continue to be an issue until we can codify Roe into law for all Americans.” -Patty Murray

Murray, a Democrat from Washington State, has spent over 30 years in the Senate and in the D.C. establishment. And, it appears, we here in Washington are stuck with her for a while longer. Over the years, the State of Washington has gone progressively “progressive” and downhill with outrageous homelessness, drug abuse and crime. Let’s not forget the insane lockdowns that caused businesses to shutter their doors and kids to miss almost a year and a half of school, thanks to Governor, Jay Inslee. Murray’s win was nearly upset by Republican candidate, Tiffany Smiley just a few weeks ago. No such luck, there, sadly. The eastern half of Washington’s voice for Smiley was flushed out by (very blue) Western Washington. Seems Democrats on the western side of the state are not yet fatigued by massive thefts in retail shops, crime, stepping on heroin needles and tent cities. Must. Protect. Abortion.

No accounting for voters’ brains here, folks. When polled this is what The Seattle Times learned:

26% of likely voters selected abortion as most important to them, and 22% selected inflation, making those the most popular picks by a wide margin. None of the other issues, such as border security, crime and climate change, were selected by more than 10% of respondents.”-The Seattle Times

Killing tiny humans is more important than inflation, border security and crime in their cities? Only a concern of a little over 10% for these other issues. Are these people living in reality?

Side note here: It may not have been helpful for the Republicans to not introduce some of these bills on the heels of the midterms. Protecting life is important but strategically, some of us were scratching our heads and wondering what they were doing, especially after a victory with Roe v. Wade earlier this year.

Voters don’t take lightly to their half-century-year-old rights being ripped away and don’t think that these deeply personal decisions should be controlled by politicians.”-Colin Seeberger, senior adviser for communications at the Center for American Progress

They should not be controlled by politicians. But they also should not be funded by a taxpayer who may choose to make another type of “deeply personal” decision should they be in the same situation. To tack onto this notion that “half-century-year-old rights” were “being ripped away”, most have gone over this already-abortion is still protected in certain states after the overturning of Roe v. Wade-making abortion “safe” and, yes, legal in these states. So, really, no one’s “half-century-year-old-rights” are being taken away.

Democrats want their voters to believe this threat, however. All while they continue to spend into oblivion and allow drugs and traffic young children over our borders. All while you are paying more at the grocery store and at the gas pump to feed your children you chose to have and shuttle them around to school and sports practices.

A couple of predictions going forward into 2024. The Democrats will continue to hammer away at the scare tactics towards younger voters that their rights to “reproductive freedom” will be taken away. Left-leaning media outlets will lean into this, spin it, slant it and fool these young, impressionable voters that we are on the heels of going into the dark ages if Democrats do not take 2024. We will have senile, old Joe Biden talking to young voters about abortion:

In 2020 you voted and delivered the change you wanted to see in the world. In 2022, you need to exercise the power to vote again for the future of our nation and the future of your generation.-Joe Biden

The change in the world that came in 2020? We were delivered perhaps the most incompetent nincompoop of all time, JOE Freaking BIDEN. They ushered that in. And now, the Democrats are counting on these young, impressionable voters to do it again and this time, do it in the names of future generations? Good God!

Riddle me this: if abortion on-demand/infanticide is the most important item on the ballot, what is to become of future generations? This is going to prove to be an interesting few years.