Next post
Impeachment Over With Acquittal Vote In Senate 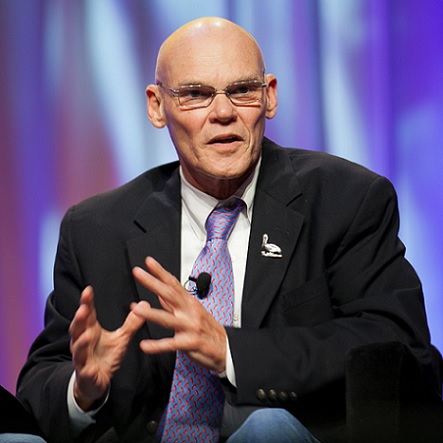 The 90’s are calling the Democrats through the voice of James Carville, and saying “what are you guys DOING???”

If you happened to miss the 90’s and the rise of Carville as the political strategist who helped give us Bill Clinton, then you don’t remember that he used to be a pretty influential voice in the Democrat party. He retired to the comfortable world of TV commentary a long time ago, and decided to support Senator Michael Bennet of Colorado for president this election cycle. However, Carville is pretty much the only person who remembers that Bennet is even running for president, and even he realizes that it’s an impossible shot.

But that doesn’t mean that he’s sanguine about the rest of the field. And even though he wants to beat Donald Trump, Carville knows how to read a poll sheet. During an interview on MSNBC, Carville tried to give the Democrats a “come to Jesus” moment on their messaging.

Saying the party needs to “wake up and make sure that we talk about things that are relevant to people,” the former Clinton adviser grumbled that he is “not very impressed” with the Democratic field and suggested DNC chair Tom Perez should be canned.”

After complaining that the campaigns “have to be more relevant,” Carville—who is backing longshot presidential hopeful Sen. Michael Bennet (D-CO)— was asked if he would get behind Sanders if the progressive senator ended up getting the nomination.”

“Well, I’ll get behind him. I have no choice,” an unenthused Carville replied. “But look at the British Labour Party. We’re like talking about people voting from jail cells. We’re talking about not having a border. I mean, come on, people.”

Carville would go on to exclaim that Democrats need to be more concerned about taking power back in Washington, repeatedly stating that only 18 percent of the population controls 52 Senate seats.”

“It matters who the candidate is, it matters what a party chooses to talk about!” Carville shouted. “I’m 75 years old. Why am I here doing this? Because I am scared to death, that’s why! Let’s get relevant here, people, for sure.”

Carville is seeing the big picture, and it’s not pretty. He didn’t help Bill Clinton win in 1992 by going super-partisan left. Does anyone remember “it’s the economy, stupid“? That was Carville’s work. The hard left of today would like to believe that the economy no longer matters, only ideology and good intentions and giving things away for free. They want to count on Trump’s personal negatives overriding the good news about the economy.

Even with impeachment, Trump’s current approval rating now stands at 49%. The State of the Union turned out to be a positive message full of heartwarming moments – even if it felt like a reality show at times, it was a GOOD reality show that made the American people cry happy tears while watching it. The Democrats had walkouts and Nancy Pelosi ripping the speech up at the end.

Those optics merely reinforce the warning bell that Carville is sounding. He should be concerned that the Democrats are headed the way of the British Labour Party. Remember the thrashing that Jeremy Corbyn so rightfully got because he’s a scumbag, and took his party down with him? It could happen here. Carville is trying to stop it from happening to the Democrats, but just watch – the “young people” who love them some Bernie because he’s promising to be Sugar Daddy and Santa Claus, all rolled into government, aren’t going to listen.

The Democrats’ low turnout means that the Bernie gulag-lovers are running free, and that means if Bernie takes the wheel of this Democrat clown car, he very well could drive the entire party off the proverbial cliff. Carville is trying to throw up a stop sign. The base isn’t going to listen. The rest of us should get some popcorn and enjoy the fireworks.