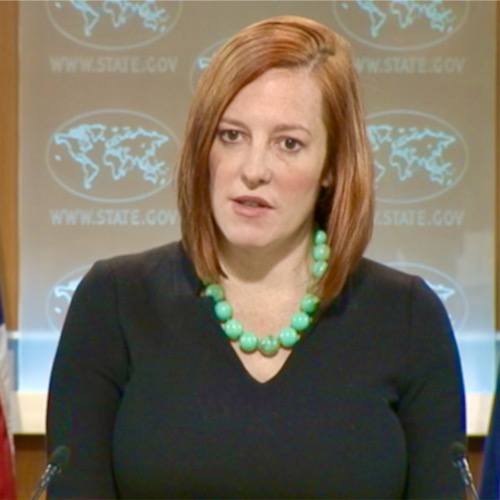 According to Jen Psaki, Americans are not stranded in Afghanistan. Yes, she literally said that to Peter Doocy yesterday.

PSAKI: "I think it's irresponsible to say Americans are stranded. They are not."

DOOCY: "'There are no Americans stranded' is the White House's official position on what's happening in Afghanistan right now?" pic.twitter.com/0FEq5VkO6V

I want you to go back and watch that exchange again. Pay very close attention to the words she used.

First of all Jen, it is NOT irresponsible to call out the Biden Administration for how badly the evacuation is going. Our troops on the ground at Kabul airport are doing the very best they can while the Pentagon generals dither over semantics and refuse to allow them to step up for the Americans stranded all over that damned country!

Secondly, as you watch that exchange again – these two phrases caught my attention:

“We are committed to bring Americans who WANT to come home, home.”

“…to reach Americans, to get them home if they WANT to return home.”

I realized I had heard Jen Psaki use that very same verbiage MULTIPLE times over the last two weeks. When you have a major government official spend the last two weeks inferring that there are many Americans in Afghanistan who might be super fine with staying in a country that is now ruled by the Taliban, it sure as hell doesn’t inspire confidence does it?

In fact, it can and does lead many to believe that the Biden Administration is TOTALLY fine with leaving Americans, Afghan SIV’s and their families STRANDED in that terrorist run country!

Currently, give the Taliban has thrown down the red line, we along with the UK, France, and other countries have exactly seven days to get everyone out. Seven days.

I applaud Peter Doocy for holding the Biden Administration’s feet to the fire. It is needed and it is necessary right now whether they like it or not.

Doocy later asked Psaki whether Americans being beaten up by the Taliban and Afghans passing babies over barbed-wire fences was what Biden meant when he said, “America is back.”

“What the president meant is that we are going to continue to lead in the world including being the leaders in evacuating not just our Afghan partners, not just American citizens, but also our allies,” Psaki replied.

Fox News had reached out to Psaki on Saturday about an American woman who described being trapped from reaching the Kabul airport. The White House never issued a response.

Fabulous Jen! We are now the evacuation leaders of the world. Terrific optics there lady! Just….awesome.

You know, this really didn’t have to happen this way. We’ve discussed that throughout multiple posts these last two weeks.

A key reason that we’ve lost the Afghan military is that when those damned Pentagon generals and the Biden White House gave the order to shut down Bagram and leave in the middle of the night, they also took all the contractors with them who supplied fuel, maintenance, and more for the equipment the Afghan military uses. Given that, I completely understand why many in the Afghan military essentially said ‘fuck it’ and quit.

But back to Jen’s shrill assertion that Americans aren’t stranded in Afghanistan. YES they are girlie, and there are multiple reports FROM Americans IN Afghanistan saying the same.

“I really have given up hope, given up on the hope of going to the airport,” the woman, whose identity is being withheld due to concerns for her safety, told Fox News. “It’s just not possible to make it through all those people.”

She said there are as many as 20 Taliban checkpoints between her and the airport – and she’s one of an uncertain number of American citizens trapped behind enemy lines.

She was whipped by Taliban fighters on one attempt to get through, she said. A man standing near her was shot in the head on another try, leaving his wife and baby in tears. Since then, she’s been in hiding.

She isn’t the only one, and people are calling Jen out for being such a lying hack.

This is a boldfaced lie!

My office literally just received word of a Tennessean STRANDED in Afghanistan. https://t.co/naM8g4OMRP

An American woman is stranded in Kabul, all alone.

When she tried to get to the airport, the Taliban beat her for the crime of traveling without a male escort.

She has heard nothing from the State Department—only from free lance volunteers a world away.

As Matt Zeller will tell you, the plans his group developed have been flat out ignored by the Biden Administration, which has led to this horrific mess with Americans stranded and in danger all across Afghanistan. So what is he and so many former military and civilians doing? Working 24/7 from the United States to try and get people through Kabul to the airport and onto planes.

Also Jen? Even Adam Schiff is telling the world that Americans are and will be stranded now and once August 31st has come and gone.

.@POTUS Presidency will be judged by one number – how many did we leave behind? Most of our Afghan wartime allies are still alive. Many are right there at the gates of #KabulAiport. We can save them. We have the means. We need the time. #TakeThemAll #AfghanEvac #DigitalDunkirk https://t.co/B6QUAiIt6q

3/4 In Kabul processing of Afghans has stopped.
The Panjshir Valley will likely be overrun soon. People trying to save high value targets like women who held high positions, or people whom worked with the US are not being allowed to move them.

Jen, Americans ARE stranded in Afghanistan. You built this, now OWN IT.