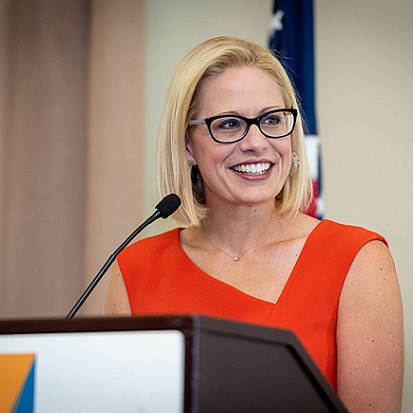 Kyrsten Sinema has become one of the most interesting senators out there – and the left is determined to bend her to their will.

The left’s mantra has become “if ONLY Manchin and Sinema would get in line, we could have ALL the goodies!” You hear this from Bernie Sanders, when he whines that “two people” are holding everything up. Bernie, like other communists, can’t do math. If the Democrats could flip a couple of Republicans, they could get what they want. But the “Build Back Better” bill’s pricetag is just too high for anyone sane to vote for. Manchin has proved to be immune to kayaking protesters thanks to his deep red constituency, but the hard left is holding out hope that they can “get” to Sinema.

This is why we’re seeing stunts like following Sinema into the bathroom with zero regard for any common decency, and confronting her while she is sitting on an airplane.

Sinema, meanwhile, has managed to not lose her cool in the face of some pretty blatant violations of her privacy. Self-control is a quality to be admired in anyone, so kudos to her. We here at Victory Girls were not happy when Sinema, who got her political start in the infamous Code Pink group, was elected to the Senate, but she surprised us all. This doesn’t mean that we trust her, or that we recommend that anyone in Arizona vote for her – it simply means that she is an Arizona “maverick” who realizes she comes from a purple state, and will not simply jump when the left demands it.

This, of course, enrages the left wing of the Democrats to no end. They thought they were getting Senator Code Pink, and they didn’t. And now they see her as the reason why Biden can’t make it rain money on all their hopes and dreams. This has led to a LOT of moaning and groaning, and demands from leftist outlets that Sinema just needs to suck it up because she’s RUINING EVERYTHING FOR BIDEN.

As if Biden needed help ruining everything. See: Afghanistan.

The protesters decided to take their harrassment campaign up a notch. Kyrsten Sinema, who has called herself an “avid runner,” had qualified to run in the Boston Marathon. The race, which is usually run in April, was canceled outright in 2020 due to COVID-19, and delayed until yesterday in order to comply with Massachussetts reopening guidelines. (The 2022 race will be held next April, though.) Since Sinema had qualified for the race, protesters made plans to show up and “birddog” her as she ran – meaning that they would station themselves along the race course in order to hold signs at shout at the senator when she ran by. At the Boston Marathon. What could possibly go wrong with that?

What better place to attempt to harass a sitting Senator than an event targeted by terrorists.

The signs were made and the protesters were READY. Boy, they would sure show Sinema who was boss!
https://twitter.com/SunriseTempe/status/1447624203386163200
Well, it turns out the joke was on the protesters.

Far-left demonstrators flew to Boston Monday to confront Sen. Kyrsten Sinema (D-Ariz.) over her opposition to the massive social spending bill being pushed by President Biden and Democratic congressional leaders — announcing their intention to do so as she ran the Boston Marathon.”

“While Kyrsten qualified for and attended the race, she could not run because of her continued recovery from a broken foot,” the senator’s spokesman John LaBombard told The Post in an email Monday night.”

Sinema suffered the injury in June while running a marathon in Washington state. Days later, she wore a sleeveless red dress to conceal her crutch as President Biden announced the White House had reached a deal with a bipartisan group of senators on a $1.2 trillion infrastructure deal.”

Oh dear. Those poor climate protesters, who burned fossil fuels getting from Arizona to Boston in order to protest Senator Sinema – without checking to make sure that she was actually going to show up. It’s a self-own of epic proportions. Truly, most people have to work a lot harder at failing this badly.

Between the bathroom ambush, the airplane ambush, and now the failed marathon ambush, the score currently stands at Sinema 3, Protesters 0. I’d tell them to stop, because clearly they are getting beaten at this game, but I don’t think they’re going to listen.