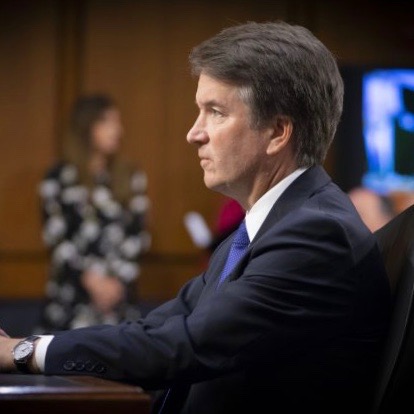 ShutDownDC fanatics have escalated their threat rhetoric against Supreme Court justices and anyone else who is in favor of the Dobbs decision.

It all started with this event on Wednesday evening.

“THE RIGHT … TO EAT DINNER”— On Wednesday night, D.C. protesters targeting the conservative Supreme Court justices who signed onto the Dobbs decision overturning the constitutional right to abortion got a tip that Justice BRETT KAVANAUGH was dining at Morton’s downtown D.C. location. Protesters soon showed up out front, called the manager to tell him to kick Kavanaugh out and later tweeted that the justice was forced to exit through the rear of the restaurant.

Daniel Lippman looked into the incident for us and confirmed that account.

While the court had no official comment on Kavanaugh’s behalf and a person familiar with the situation said he did not hear or see the protesters and ate a full meal but left before dessert, Morton’s was outraged about the incident. A rep for the chain steakhouse sent Lippman this statement:

“Honorable Supreme Court Justice Kavanaugh and all of our other patrons at the restaurant were unduly harassed by unruly protestors while eating dinner at our Morton’s restaurant. Politics, regardless of your side or views, should not trample the freedom at play of the right to congregate and eat dinner. There is a time and place for everything. Disturbing the dinner of all of our customers was an act of selfishness and void of decency.”

Well, ShutDownDC wasn’t happy about Morton’s Steakhouse blasting them for their antics, and responded with invective.

Keep in mind, many conservative public officials have been harassed and heckled in public since 2016 when President Trump was elected. The Democrats think this is totally fine. They never stop to think about what happens if the shoe is on the other foot.

AOC tried her hand at her own ‘let them eat cake’ moment.

Weren't you the clown who was whining that someone took a picture of you eating a hamburger? https://t.co/9UFQlajl3b

*Sigh. An ectopic pregnancy is life-threatening and the procedure performed is NOT an abortion. But good ole AOC is just parroting the leftist talking points as usual.

You would being calling the crowd "terrorists" https://t.co/dphxY8eDEP

Keep in mind, this is the same Supreme Court Justice who was targeted for assassination just last month. An incident that could’ve ended horrifically if it weren’t for the sister of the shooter convincing him to turn himself in. An incident that Biden has yet to outright condemn.

“What I’m saying is we condemn any intimidation when it comes to judges,” the press secretary repeated. “We have been, the President has talked about this and we have put out statements.”

“So, where’s the line?” Doocy asked later in the exchange. “If these protesters can go to a justice’s house and they can go to a restaurant, where is it that you don’t think it’s appropriate for a group of protesters to go?”

“I just laid out — you asked me about intimidation. We condemn intimidation, we condemn any violence,” Jean-Pierre repeated. “And we’ve been very clear. That is, it is a clear definition of what violence is or what intimidation is. Peaceful protests, people should be allowed to be to be able to do that.

No one in the Biden Administration has clearly stated that this harassment and violence needs to stop, she’s just gaslighting.  Furthermore, she states that this kind of harassment is just democracy in action.

It doesn’t help that Biden himself is now being fed lines that describe the Supreme Court as a fully politically conservative entity that is exercising ‘raw political power.’ Statements like that are fuel to the fire for fanatical groups like ShutDownDC, who decided to escalate their rhetoric with bribes.

DC Service Industry Workers… If you see Kavanaugh, Alito, Thomas, Gorsuch, Coney Barrett or Roberts DM us with the details!

We'll venmo you $50 for a confirmed sighting and $200 if they're still there 30 mins after your message. https://t.co/xXWZ5JZiE7

What could possibly go wrong with this scenario? More protests outside restaurants? Or will protestors try to force their way into restaurants? I’d be willing to bet that the ShutDownDC fanatics will try to do some of both. They aren’t afraid of being arrested. Given it’s Washington D.C., they’ll be let out with a warning and a mere tap on the wrist. Zero consequences to their actions will only encourage them further.

In fact, the Occupy Democrats and the ugly group Ruth Sent Us that doxxed all the SCOTUS Justices homes have jumped into the fray as well.

The Democrats and the left WANT this violence. Democrats are on record for encouraging violence of this sort and, like Kamala, have bailed out many a protestor and rioter for stalking, harassment, and destroying businesses. It’s perfectly fine for ShutDownDC to offer up bounties for sitings of any of the Supreme Court justices. No one on the left will condemn that group because that’s what they want.

ShutDownDC, Occupy Democrats, and Ruth Sent Us among others want the intimidation, harassment, and yes violence. By their playbook, this is all perfectly fine. Whereas the January 6 incident was the most horrific thing ever and people are still being denied their due process rights. Then again, January 6 doesn’t fit their playbook, this does.

And when someone gets hurt or even killed, no one of those leftist fanatical groups will suffer any consequences.