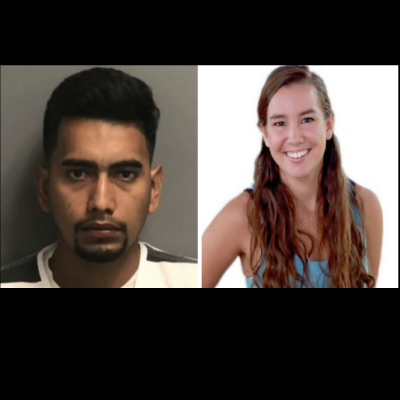 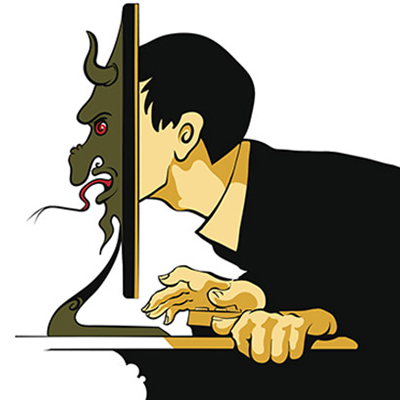 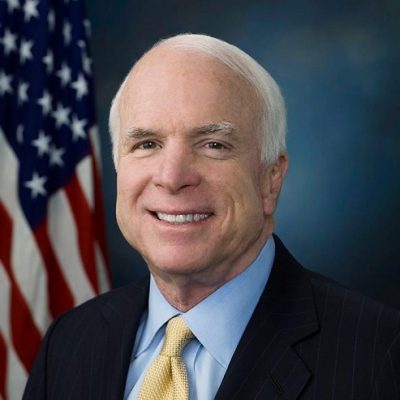 #BREAKING McCain office: “Senator John Sidney McCain III died at 4:28pm on August 25, 2018. With the Senator when he passed were his wife Cindy and their family. At his death, he had served the United States of America faithfully for sixty years.”

While McCain’s legacy will be debated for years to come within the scope of history, war, and politics, what is indisputable today is that he leaves behind a grieving family (including his 106-year-old mother) and a lifetime of service, including a period in a veritable hell on earth known as the “Hanoi Hilton.”

Early Life
John Sidney McCain III was born in 1936, the son of John and Roberta McCain, outside of the United States in Panama Canal Zone. The McCain family was already a fixture in the United States Navy, with both McCain’s father and grandfather attaining the rank of admiral during the course of their careers.


McCain would also follow the family tradition and join the Navy, graduating from Annapolis in 1958, and serving as a naval pilot during the Vietnam War.

The POW Years
After escaping the horrific fire on board the USS Forrestal in 1967, McCain was shot down just a few months later and imprisoned in the infamous Hỏa Lò Prison, nicknamed the “Hanoi Hilton.”

“The plane was gyrating violently and heading straight down, very fast, at about 500 knots,” McCain told PEOPLE during a lengthy interview in 1992 on the back porch of his home in Arizona, describing the hellish moments that elapsed after a surface-to-air missile blasted the wing off his jet.

It was his 23rd bombing mission over Hanoi and the 30-year-old lieutenant commander knew his only hope of survival was to bail out of the burning, doomed aircraft as it plummeted straight toward the ground. “When I ejected, the pressure flailed my arms back and that’s what broke my arms,” he recalled. “My knee obviously hit something on the way out and I ended up breaking my leg, too.”

His parachute opened and, as fate would have it, he drifted down into a lake in the middle of the city he’d been sent to bomb. “When they pulled me up on the bank, lots and lots of people started coming around,” he said. “They were pretty steamed, which is understandable since we’d just finished bombing the place. They bayoneted me in the foot and the crotch and were spitting at me, hollering and shouting.”

A group of soldiers finally arrived as locals were in the midst of beating him with a rifle butt, dumped him onto a stretcher, which was loaded on the back of a truck. He was eventually driven to the massive prison complex built by the French in 1945 where numerous American pilots were tortured and interrogated during the Vietnam War.

“They left me on the floor of a cell for four days, during which time I lapsed in and out of consciousness,” McCain said. “Their policy was that they wouldn’t provide any medical treatment unless you gave them military information. I would only give them my name, rank, serial number and date of birth. And so, after about four days on the floor of the cell, they got nothing out of me because I kept passing out.”

His captors eventually took him to a run-down hospital and operated on his knee, cutting most of his ligaments and cartilage, and placing his right arm in a chest cast. “The important thing they gave me was blood, ” he said. “I was in shock and they gave me transfusions, which gave me strength. But I wasn’t well-treated by the guards, who ate all my food and I slowly started getting worse.”

One afternoon, one of his interrogators appeared in his room and said, “‘The doctors tell me you aren’t getting well.’ I told him the only way I’d survive is if they put me in with some Americans,” he recalled. “That night they took me out of the hospital and put me in a cell with two other prisoners. Those two guys took care of me.”

After six months, the badly-injured flyer was able to walk with crutches—which inadvertently made life worse for him. “Letting them see I could walk was a mistake on my part,” he said. “They put me in solitary confinement for more than two years after that.”

McCain’s windowless ten-foot-by-ten-foot cell had a sheet metal roof that was transformed into a scorching oven in Hanoi’s sweltering summer heat. By mid-1968, his father was named commander of all U.S. Forces in Vietnam and his captors offered to send him home. Despite his desperation, McCain realized the gesture was purely a ploy meant to demoralize his fellow prisoners. After a bit of soul searching, he told the Vietnamese he was staying put and refused to leave the prison.

“They were astounded that I would refuse,” he said. “I’m not downplaying how difficult that decision was for me, but I did it because I thought I could survive—even though I was in pretty bad shape. But our code of conduct clearly states, ‘You do not accept parole. Sick and injured prisoners must be released first and others are to be released only by order of capture.”

McCain’s entire story of his 5 1/2 years as a prisoner of war is truly gripping, and the pain and suffering endured cannot be imagined.

McCain’s Political Career
John McCain’s political career began as Navy liaison to the Senate in 1977, and when he left the Navy in 1981, he had already decided to run for Congress. After his divorce from first wife Carol and remarriage to second wife Cindy, McCain won election to the House in Arizona’s First Congressional District in 1982.
McCain won his Senate seat in 1986, and has stayed in it ever since, weathering both scandal and presidential runs in 2000 and 2008. In 2008, McCain was the Republican nominee for president, going head-to-head against Barack Obama.

McCain also chose Governor Sarah Palin of Alaska as his running mate, making her the first woman nominated on the Republican ticket (a decision he says he regrets in retrospect), and ended up losing to Obama in the general election. McCain’s career continued on in the Senate, where he had racked up many controversial positions over the course of years. Others will come along and pick apart McCain’s positions and decisions for years to come, but he never was shy about letting his opinions be known, up until the very end.

Diagnosis and Death
Senator John McCain was diagnosed with glioblastoma, an aggressive brain cancer, in July 2017. Given his age and the type of cancer, his family knew to prepare for the worst. 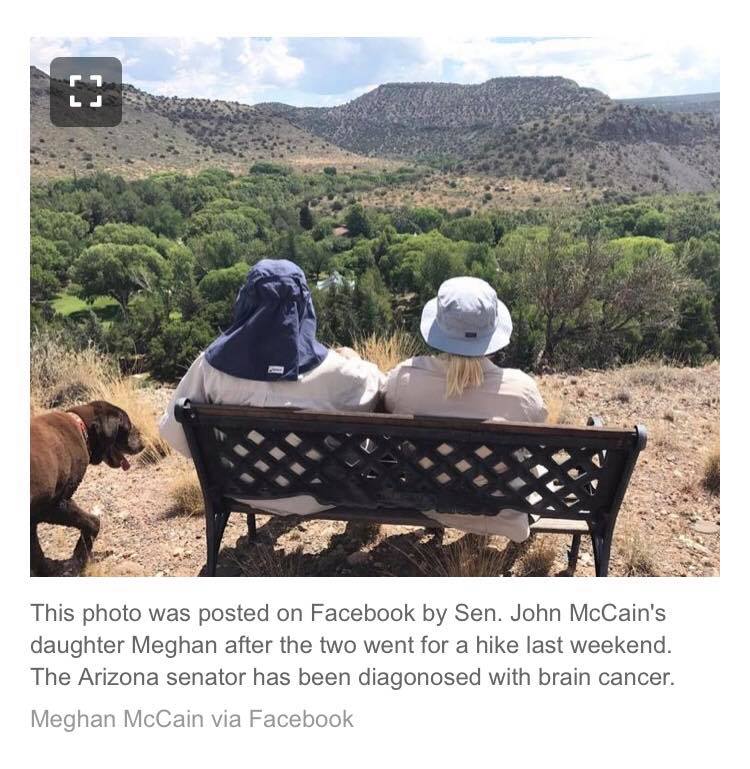 https://twitter.com/MeghanMcCain/status/992435386101190656
Just yesterday, the McCain family announced that John would be stopping treatment. They must have known the end was close.

My family is deeply appreciative of all the love and generosity you have shown us during this past year. Thank you for all your continued support and prayers. We could not have made it this far without you – you've given us strength to carry on. pic.twitter.com/KuAQSASoa7

I love my husband with all of my heart. God bless everyone who has cared for my husband along this journey. pic.twitter.com/v27sEbboii

And kind words began to appear as soon as the news was announced, and after the notice of his passing, from both sides of the political aisle.
https://twitter.com/SarahPalinUSA/status/1033054640663879681

America shines less brightly today with the passing of John McCain, an American hero. My thoughts and prayers are with the family and friends of @SenJohnMcCain. America is a better place because of his public service. https://t.co/z0rEzXUAQt

America and Freedom have lost one of her greatest champions.

….And I’ve lost one of my dearest friends and mentor.

Saddened by the death of war hero and senator John McCain, who served our country with honor and distinction. May the Lord comfort his family in their time of grief.

Condolences and prayers to the McCain Family.

Gratitude and respect for John McCain, who served the nation honorably and courageously as a Navy Captain, POW in Vietnam, and US Senator.

May he Rest In Peace.

We just lost an American hero. A legend. A brave and important voice. A real man. A true patriot. Our hearts are heavy. John McCain was what we all wish for in a leader. He delivered.. He served his country in every way he could .. to the end.

John McCain devoted his life to serving his country. He was and always will be an American hero. Our thoughts are with his family, his colleagues, and the people of Arizona as we mourn his passing and celebrate his legacy.

John McCain is survived by his wife Cindy, seven children, grandchildren, his mother Roberta, and his two siblings.

My heart is broken. I am so lucky to have lived the adventure of loving this incredible man for 38 years. He passed the way he lived, on his own terms, surrounded by the people he loved, in the the place he loved best.

Our deepest sympathies go out to the McCain family for their loss. 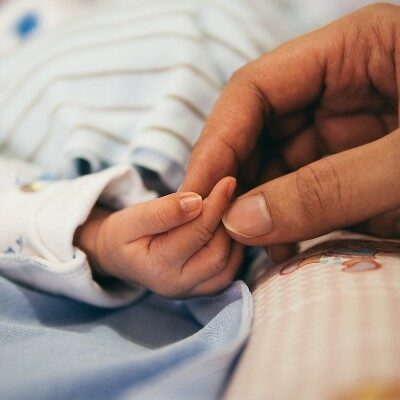