NY Times: Those Patriotic Deep State Folks Are Causing A Crisis In The GOP

NY Times: Those Patriotic Deep State Folks Are Causing A Crisis In The GOP 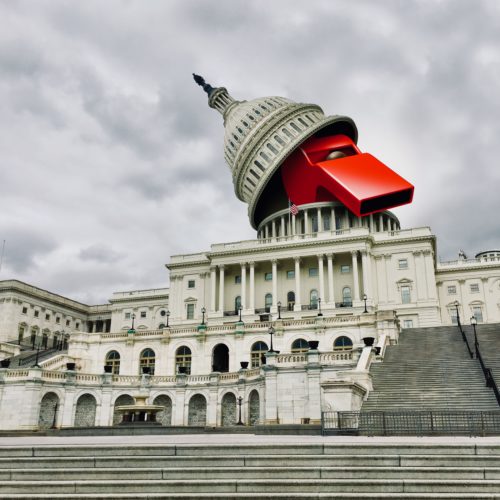 The NY Times is now applauding the Deep State for their PATRIOTISM while, at the same time, they have declared the GOP is in crisis.

“President Trump is right: The deep state is alive and well. But it is not the sinister, antidemocratic cabal of his fever dreams. It is, rather, a collection of patriotic public servants — career diplomats, scientists, intelligence officers and others — who, from within the bowels of this corrupt and corrupting administration, have somehow remembered that their duty is to protect the interests, not of a particular leader, but of the American people.”

Oh my….isn’t that cute? Because climate change isn’t science and Trump refuses to play the environmentalists game, government bureaucrats are heroes for filing whistleblower complaints and whining that government is no longer the place “to be exploring things that don’t agree with someone’s political views.” Uh huh…You know what that tells me? Those who are whining and quitting are the same folks who had free rein, no questions asked, during the eight years of Obama. But now, when they actually have to PROVE their premises, Trump is mean? Sucks to be them.

But that’s not all! The still anonymous whistleblower(s) – I keep wondering where the IRS whistleblower is – and other career diplomats are just waiting to pounce against Trump’s dilettantes and lackeys. Once and for all they will prove that Trump was mean, Trump said stuff, and that means Trump/Russia/IMPEACHMENT!

But the whistleblower, who has based his/her complaint off of ninth party hearsay is BRAVE! Not by a long shot.

Adam Schiff has already been caught lying about who, what, where, and when HE himself had contact with the whistleblower. Which led to him backpedaling and declaring last week that interviews and testimony from whistleblower probably aren’t needed. Gee, I wonder why? Perhaps because:

A. There is no there there regarding Trump mentioning the Bidens on the Ukraine call?

B. The Democrats have been scrambling ever since to keep additional depositions, evidence, and transcripts hidden from view

C. The impeachment calendar has moved further out at least three times. Now we are looking at mid-November…maybe

Not long ago, the NY Times was singing a different tune regarding whistleblowers.

Make up your mind. pic.twitter.com/rup61OEHMu

In other words, the NY Times was providing cover to the Deep State folks (hi Jim Comey!) and working overtime to convince the public that no such animal exists. That was then! That was…DIFFERENT.

Broke: There's no such thing as a "deep state." Only crazy conservatives believe that.

Woke: There is a "deep state," but only crazy conservatives believe it's a bad thing. https://t.co/k0evs6QA6o

We crazy conservatives also need to know, thanks to the NY Times scolds, that the GOP is in crisis.

“The Republican Party is again confronting a crisis of conscience, one that has been gathering force ever since Donald Trump captured the party’s nomination in 2016. Afraid of his political influence, and delighted with his largely conservative agenda, party leaders have compromised again and again, swallowing their criticisms and tacitly if not openly endorsing presidential behavior they would have excoriated in a Democrat. Compromise by compromise, Donald Trump has hammered away at what Republicans once saw as foundational virtues: decency, honesty, responsibility. He has asked them to substitute loyalty to him for their patriotism itself.” [Emphasis Added]

Was it “decent” of the NY Times to gleefully print Julie Swetnick’s unfounded accusations against Brett Kavanaugh, or peddle a book about Kavanaugh accuser Deborah Ramirez that sunk so bad it disappeared?

Was it “honest” of the NY Times to gloss over the fact that the Steele Dossier was nothing but lies peddled by Fusion GPS? Lies that the Times bought hook, line, and sinker?

How responsible is it, when the Times publisher himself, Dean Baquet, admits their reporting was solely built around Trump/Russia/Collusion/Election Stealing since the night of the election? How responsible is their so-called journalism when they admit the new NEW narrative will be tied to accusations of racism and applauding Deep State cowards as long as it all makes Trump look bad?

The New York Times is doing their level best to prop up and help the Democrats prevail against Trump. DNC Chair Tom Perez is even cheering for the deep state folks. Meanwhile the Democrat fundraising is in the tank, and Democrats aren’t happy.

"Tom Perez is as useless as tits on a boar hog. My advice to Tom Perez is quit, get out of the way or do something different." https://t.co/nQVA7vvaOE

The NY Times demands that we treat the Old Gray Lady with respect and applaud their “journalism.” Fine. Then quit lying about your lack of objectivity and call yourselves what you are Fake News propagandists who want this Republic to fail.