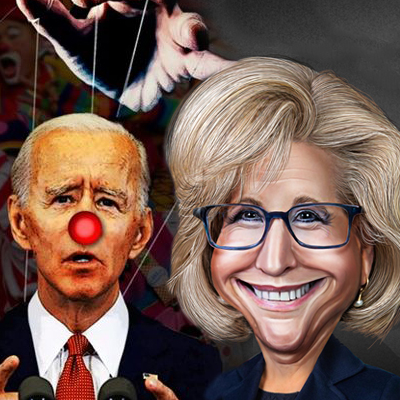 A Biden-Cheney 2024 ticket will fix all that ails this country says New York Times Thomas Friedman. No folks, this isn’t a joke. He really wrote that.

In order to make America governable again, Friedman believes the idea of a Biden-Cheney 2024 ticket isn’t that far-fetched.

According to a buddy of his, a political scientist named Steven Levitsky, this could and should happen. According to Levitsky we are definitely facing an existential crisis and the Trump-cult folks should never see the light of day again.

“In a democracy,” Levitsky said, “parties lose popularity and they lose elections. That is normal. But a democracy cannot afford for this Republican Party to win again because they have demonstrated a ton of evidence that they are no longer committed to the democratic rules of the game.”

So Biden-Cheney is not such a crazy idea? I asked.

“Not at all,” said Levitsky. “We should be ready to talk about Liz Cheney as part of a blow-your-mind Israeli-style fusion coalition with Democrats. It is a coalition that says: ‘There is only one overriding goal right now — that is saving our democratic system.’”

Well, as long as the pendulum of the winners goes full Democrat Left, then yes, the democrat system will be saved. Our Republic? Gone forever. So, seemingly, a Biden-Cheney ticket in 2024 will save us all!

What’s funny about all of this is earlier yesterday the Wall Street Journal had a very different idea of how to save our country.

A perfect storm in the Democratic Party is making a once-unfathomable scenario plausible: a political comeback for Hillary Clinton in 2024.

Several circumstances—President Biden’s low approval rating, doubts over his capacity to run for re-election at 82, Vice President Kamala Harris’s unpopularity, and the absence of another strong Democrat to lead the ticket in 2024—have created a leadership vacuum in the party, which Mrs. Clinton viably could fill.

Ah ha! So Hillary is super popular but now Liz Cheney could be the chosen one to save the Biden Administration from Kamala’s blundering?? The same Liz Cheney who pranced around on the House floor on January 6 with her dad, former Vice President Dick Cheney?

“I’m deeply disappointed we don’t have better leadership in the Republican party to restore the Constitution.”

He noted that his daughter is an exception. https://t.co/Vywy2wbVil

Well, Dick. You screwed up here. As did your daughter. I’ve been very clear these last months about how incredibly disappointed I am in Liz Cheney. Dick, let me tell you something. Our Constitution is in place. It doesn’t need restored. What our REPUBLIC needs is for the Democrat left to stop doing work-arounds via Executive Orders, mandates, and refusing (hello CONGRESS!) to do their damned jobs. No, Dick. You do not get to tell me that we need to restore our Constitution when all those arrested after the stupidity of January 6 have not been afforded their CONSTITUTIONAL right to due process!

Thomas Friedman wants a Biden-Cheney 2024 ticket as if that will magically make all those pesky Republicans toe the Democrat line.

“Saving a democratic system requires huge political sacrifice, added Levitsky. “It means A.O.C. campaigning for Liz Cheney” and it means Liz Cheney “putting on the shelf” many policy goals she and other Republicans cherish”https://t.co/wnRp2fquDB

Can you just imagine??? Good ole AOC campaigning for Liz Cheney? I would honestly buy tickets to that show.

What is also laughable is that Friedman tries to compare our electoral system to that of Israel’s. Two very different countries and two VERY different government. This isn’t an apples to oranges comparison. He reaches with an apples to coconuts comparison!

Do you know what both of these op-eds tell me? The Democrats and the media are running scared with scissors in both hands. They KNOW that Joe Biden is an addled barely functioning troll. And they KNOW that Kamala is a brainless puff piece. The idea of putting her in charge is scaring the absolute shit out of all of them. Hence the very mad scrambling to position Hillary once again or thrown a new twist into the mix – Liz Cheney.

First of all, she has lost the entirety of Wyoming by A. Not showing up for 2 1/2 years now to meet constituents. B. Calling anyone in WY who disagrees with her a radical, thus implying WY is full of Jan 6 idiots, which is far from the truth, or C. implying that she knows best and her constituents are too dumb to understand that.

Holy crap! Liz Cheney just falsely claimed she is the ranking member — the top representative of the GOP caucus — on the J6 committee. In fact, she was hand-selected by Nancy Pelosi and Is NOT the ranking member. Huge, huge legal implications associated with this lie.

Yes, she said that.

Not only is the Democrat party apparatus desperate, they are hoping that Liz will help save them from their own destruction.

The problem is, Liz’s dogged insistence on staying with the Jan 6 commission idiocy and Trump impeachment, has cratered her credibility among Independents, moderate Democrats, and even Republicans who, on any other day, might’ve considered voting for that ticket. Then again, too many people are realizing addled Joe is and should not be a choice either.

I’ll say this for Tom Friedman, his pie-in-the-sky wishful thinking of a Biden-Cheney ticket was a fun read!