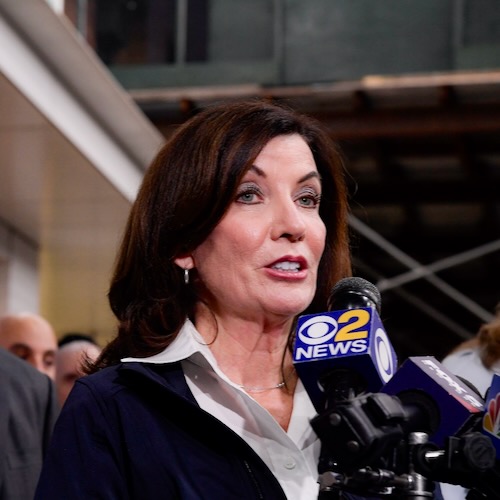 In an abrupt switch, suddenly Governor Kathy Hochul is concerned about crime in New York City subways. The problem is, this is a pointless gesture geared chiefly to prop up her faltering campaign.

Near the end of last week, certain polls suddenly showed that Lee Zeldin (R) is pretty much dead-even with Hochul, or even slightly ahead!

The independent co/efficient survey of 1,056 likely voters shows Zeldin with 45.6% support and Hochul at 45.3% with the rest undecided.

You have to wonder the timing, when the VERY NEXT DAY, Hochul along with Mayor Eric Adams made a grand announcement about how they will fix the crime issues on New York’s subways.

Just a few days ago, Eric Adams insisted there wasn’t a crime problem on the subways.

Except that nine deaths and multiple attacks since January tell a completely different story. Why is this new grand plan a pointless gesture? Several reasons.

One: the promise of cameras on every car. How will that help STOP any criminal acts from happening? It won’t. Furthermore, that many cameras on that many cars, will there be enough eyes on those cameras to then deploy police and have then waiting at the next stop to arrest the criminal? I am skeptical.

Two: Overtime will be a big issue. I mean, it sounds great! Just move cops around, hand them a bunch of overtime and magically the subways will be safe again. Except that isn’t how this works.

As Nicole Gelinas notes, the new patrols depend on added overtime, which is nothing like a lasting solution. Cops, like anyone else, can only do so much OT before they’re exhausted — and the city was already expecting to do 61% more street-cop OT than initially budgeted.

Plus, NYPD retirements/resignations are on pace to exceed 4,000 this year, the highest since post-9/11. Thanks to no-bail and other “criminal-justice reforms” that Hochul continues to defend and even extend, plus won’t-do-their-jobs DAs like Alvin Bragg (whom she refuses to fire), police morale is through the floor.

As for the victims who do survive, is it even worth it to talk to Hochul or Adams to get something done instead of making pointless gestures? Not according to one victim’s mother it isn’t.

Shocking video footage from the incident shows the unsuspecting straphanger walking along the platform when his attacker runs up and shoves him to the tracks before fleeing. There were no trains entering the station at the time, and the victim was able to get to safety.

In an interview with WABC Eyewitness News after the attack, David Martin told the outlet that the shove came “in the blink of an eye.

“People were told that I had no injuries, but I am laying in bed with a broken collarbone, and my face is so swollen,” he said. “And mentally I don’t know how to even get through this.”

The incident is just the latest in a spate of transit violence in the city this year, with nine straphangers killed in subway attacks so far — or already more than any other year in 25 years.

Here’s another problem with this plan. If the cops DO arrest someone, how long before they are waltzing out of jail because of Alvin Bragg’s policies regarding no bail? Given that criminals are facing little to no consequences for their actions whether it’s assault, robbery, or murder, why should law enforcement actually do their job in that kind of climate?

This morning, Eric Adams had another bright idea about how New Yorkers can combat the subway crime he tried to dismiss as a nonissue the other week.

Oh, and you gals out there, stop wearing short skirts.

Because New York under Democrats, from City Hall to Albany, from Mayor through AG through the Assembly and Senate through the Governor, isn't going to do ANYTHING to prevent crime.

Yes, Kathy Hochul is so concerned about the rampant crime that she continues to champion bail reform instead of pushing for real consequences for criminals. As former NYPD Commission Ray Kelly says, getting crime under control isn’t brain surgery. It’s going back to the programs such as the anti-crime units or reimplementing stop and frisk. Those programs WORKED. The woke crap surrounding the so-called bail reform or having cops get dangerously tired while working endless hours of overtime…WON’T.

But again, Kathy Hochul, who had already announced two other subway crime reform initiatives earlier this spring, doesn’t want to really fix the problem. She just wants to be perceived as DOING SOMETHING so she can squeak out a win against Lee Zeldin.