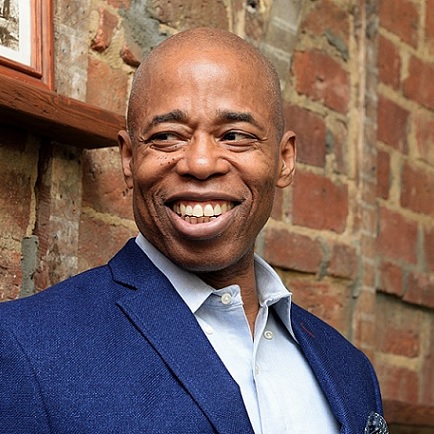 Well, so much for hoping that new mayor Eric Adams would attempt to be a more reasonable Democrat in New York City.

The only advantage that can be seen so far is that Mayor Adams does not have the knee-jerk reactions of Bill de Blasio to blame the police for whatever happens. In this most recent case, the new mayor has seemingly acted appropriately at the news of the death of a rookie police officer during a domestic violence call. At least, until he decided who to blame.

Was Mayor Eric Adams going to blame the felon who illegally had a gun while on probation? Nope, Adams is a Democrat. They don’t do that any more. The same way the press has blamed the car for a “parade crash” in Waukesha when it was a deliberate attack by a career criminal, Mayor Adams is blaming the “illegal gun” for the death of Officer Jason Rivera. And not only is it the gun’s fault, Adams wants THE FEDERAL GOVERNMENT to fix the problem.

We are all witnesses. To gun violence. To these murders. To the failures of leaders who have allowed these killers to get ahold of guns.

We won’t allow violence to divide our city. It will unite us — being united is the only way we can save our city.

The mayor very explicit that he wants federal intervention in order to get the guns off the street.

Mayor Eric Adams demanded assistance Sunday from Washington D.C. to block the “constant flow” of firearms into the Big Apple, days after an NYPD cop was killed and another officer was left fighting for his life after they were shot — declaring “the federal government must step in.”

“The police department is doing their job taking thousands of guns off the streets, yet each time you take a gun off, there’s a constant flow of new guns coming here,” he said on ABC’s “Good Morning America.”

“And if we don’t coordinate to go after those gun dealers that are supplying large cities in America such as New York, we are losing the battle, and the federal government must step in and play a role in doing so.”

During a subsequent TV appearance, Adams speculated that even though cops seize many firearms, they are quickly replenished by even more of them being transported to New York City.”

“We have to stop the flow of guns. We are removing thousands of guns off our streets, and it appears for every gun we’ve removed from the street, five are coming in. That is unacceptable,” he said on “CNN’s State of the Union.”

That sound you hear is me, breathing in my nose and out my mouth, in order to stay calm and not break my keyboard.

We don’t know how the killer got his gun, but we do know that it was reported stolen from Baltimore in 2017. Who did the stealing? How did the gun get from Baltimore to New York? And how would the FEDERAL government fix this? What law can possibly be passed to keep a stolen gun from crossing state lines and out of the hands of felons?

The answer is there is no law that can do that, short of gun confiscation (and don’t tempt the Democrats, their dream is to turn us into Australia, in more ways than one, if they can manage it). But does Mayor Adams recognize that? Does he drag District Attorney Alvin Bragg into his office to discuss the exploding crime in New York City? Nope, he’s falling back on the old playbook. Blame the gun, demand the feds fix it.

Even the New York Post editorial board recognizes this as a purposeful misdirection.

… Adams and (Governor) Hochul both zeroed in on the illegal gun trade, saying that Washington needs to step up. We don’t disagree, but the issue more often than not is used as a dodge. It’s easy for liberal politicians in New York to point the finger at gun sellers in, say, Tennessee, and pretend that’s the end of it. What do you do when someone is caught with an illegal gun in New York City? Blaming gun running is an empty platitude if you believe that NYPD officers can’t search a suspicious person for a gun, and that someone caught with a gun gets no bail — and often no jail time. It’s not just about getting guns off the streets. It’s about getting the people using those guns off the street. Credit where due: Adams and (NYPD Commissioner) Sewell are reintroducing the plainclothes unit tasked with this. Prosecutors and judges must have their backs.”

New York City has a huge crime problem that was allowed to fester and grow malignant under Bill de Blasio. Attacks on Jews and Asians got little press coverage and minimal attention unless there was a death, because the perps were generally of a demographic that the liberal establishment wanted to protect. Because we all know, if Klansmen had been running around New York City attacking Jewish children or shoving Asian women in front of trains, it would be a front-page story with wall-to-wall cable news coverage. The “bail reform” law in New York that Democrats loved when it was passed, has resulted in buyer’s remorse for some, while others like DA Alvin Bragg embraced it fully.

But sure, blame the gun. That’s easy. Why bother actually having to be accountable for the crime hole that you’ve been elected to manage and clean up? Just pass the buck to Washington! What could possibly go wrong?