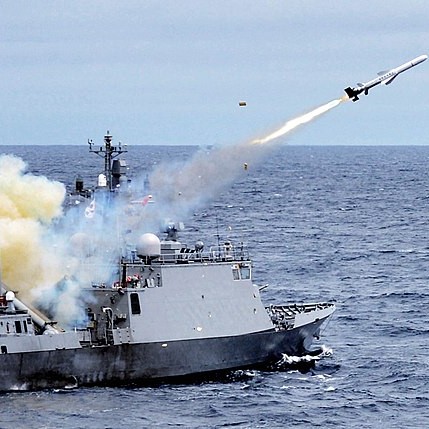 Remember that 3 am phone call that Hillary Clinton once said she was ready to take? Well, Joe Biden can’t get up that early, so if there just happens to be an exchange of gunfire between North Korea and South Korea, it’s just going to have to wait until the president is up and had his medication and morning pudding first.

And yes, you read that right. There are no clear lines drawn in water, so North Korea and South Korea traded warning shots Monday morning off the western coast of the Korean Peninsula.

South Korea’s Joint Chiefs of Staff said in a statement that its navy broadcast warnings and fired warning shots to repel a North Korean merchant ship that it says violated the sea boundary early Monday.”

North Korea’s military said its coastal defense units responded by firing 10 rounds of artillery warning shots toward its territorial waters, where “naval enemy movement was detected.” It accused a South Korean naval ship of intruding into North Korean waters on the pretext of cracking down on an unidentified ship.”

While a merchant ship is not a military one (maybe), North Korea definitely responded with military force to the warning shots that South Korea used. Tensions in Korean waters have every chance of spilling over to the Korean Peninsula, and this is just another instance of Kim Jong-un’s dictatorship showing itself to be armed to the teeth and willing to shoot off weapons whenever it feels like it. The South Koreans are getting the message loud and clear. North Korea is steadily increasing the temperature in a Cold War conflict that never came to a complete end.

So, where is Joe Biden? What is he up to, and how will he deal with this potential diplomatic crisis?

Oh yes, he was busy hosting social media influencers at the White House this weekend, and going all in on letting kids who legally can’t even get a tattoo opt to surgically mutilate themselves, if they feel like they should be a member of the opposite sex.

It's two weeks before the midterms and Biden is doing interviews w/ transgender activists about the need to surgically sterilize kids. I think the progressives running the WH are actively trying to piss off 80 percent of the country. Never seen anything like it. https://t.co/uKILAPYTZT

Okay, you say – but that was this weekend, before anything happened between North and South Korea. Well, are you confident that this guy is going to be completely on the ball when it comes to crafting an appropriate statement, or course of action? The old man can’t even remember what is going on anymore.

If our ears are not deceiving us, it seems that Joe Biden, who declared via executive fiat that he could cancel student loan debt using the HEROES Act, thinks that he actually got legislation passed. Ohhhh boy. And that wasn’t even the WORST moment for Joe Biden over the weekend. If the midterms end up being a disaster for Democrats, these moments are suddenly going to be Exhibit A in the media’s new discovery that Joe Biden Is Old.

In about 3 weeks, we’re gonna be Now It Can Be Tolding this whole situation so hard. https://t.co/r6BXdn0Ds4

We are in deep trouble, everyone. Joe Biden is not demonstrating, by any stretch of the imagination, that he is currently capable of being president RIGHT NOW, much less prepared to run again in 2024! We The People did not elect Ron Klain, Susan Rice, and Jill Biden to run the White House from behind the curtain.

Now, will the Korean Peninsula ignite in a full-scale war tomorrow? Unlikely, but not impossible. South Korea does not want to fight a war, but the entire region might have no choice if North Korea simply starts firing. Would North Korea dare to do so without China’s blessing? There is open speculation that China is going to attempt to take Taiwan sooner rather than later – as in, within the next calendar year – and it all stems back to the weakness of Joe Biden when it mattered most in Afghanistan.

Biden is seen as frail, weak, and increasingly cognitively impaired as time goes on. Why wouldn’t North Korea get aggressive? Why wouldn’t China speed up plans in order to invade Taiwan in 2023? The old man in the White House won’t even learn about the shots being fired in Korean waters until AFTER his alarm clock goes off in the morning. There’s no 3 am call that Joe Biden is going to respond to – unless it’s the call of nature.

Will the world that the next president has to deal with be a safer one because of Joe Biden? I think we all know the answer to that. And we might all be paying the consequences in short order.