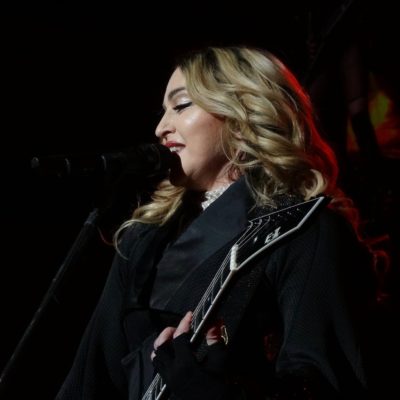 Just a few days ago, 61 year-old nutjob, Madonna posted on Twitter whilst sitting in a rose petal-filled milk bath. But there’s more to this insanity. Enter, The Quarantine Diaries:

Madonna is currently stuck in France in quarantine where, apparently, she has an entourage of doctors for physical therapy and a film crew to produce her “candid” daily accounts where she plays vintage tunes and hammers away with two fingers at a Smith Corona (ironically enough) typewriter. She dons a silk robe, sips her tea, babbles (sometimes incoherently) and intentionally tries to throw in the British accent she somehow magically acquired in the 90s.

I watched the last rose petals go down the drain..and yes, I am lucky I have a friend who is a florist and she gives me lots of roses.”-Madonna

Madonna talks about how COVID-19 is making her a more “tolerant” person in one segment whilst calling death to the patriarchy in yet another claiming “the patriarchy is still trying to drive her life.” Ohhhhkay. She also muses that she listened to a speech from Bill Gates in 2014 about “setting up a structure to stop pandemics and kill germ warfare” and how “Obama listened and Trump dismantled it”.

Why didn’t we listen? Why…why…why?”-Madonna

I’m not going to lie. I laughed out loud.

The singer complains about being too tired to sleep in her insomnia-inspired rants. She muses how she and her children (25 year-old boyfriend included) are rationing food, how she managed to get some sunshine in her garden one day to boost the ol’ immune system. She discusses her family’s dinner conversations. How they discussed their favorite artists…(insert pretentious, fake accent here) Picasso, Dali. She talks about how her “audience” in her house (her children, boyfriend included) is not amused by her and how she misses the audience-talking in front of them, making them laugh and f#cking with them. (Must be that “tolerance” settling in, right, Madge?) The audience, she says, is one of the “luxuries” she misses.

Madonna, unbeknownst to her vapid and shallow human shell of a soul, still possesses luxuries most Americans don’t have. Take, for instance, the luxury to be blatantly clueless in a time of great despair for some. While we laugh at her musings, there is a dark sadness regarding how out-of-touch and irrelevant these celebrities really are and how desperate their overtures for attention are reaching. While she can send her little errand boy, Pierre, down to the boulangerie for a loaf of bread, we’re running down to Wal-Mart suited up in our fashionable latex gloves. While she and her entourage are “rationing food”, families in communities are pooling together to do grocery shopping for their elderly neighbors and to feed some children who get their ONLY meal of the day at schools that are now closed across our nation. While she has a film crew chronicling her COVID-19 musings, a full medical staff to take care of her physical therapy needs after she fell off a stage, as well as someone for sure to come in and do those injections on her face, there are individuals concerned about whether or not they will get the healthcare they need should they come down with the illness. While she sits down to a dinner table adorned with roses from her florist friend talking Dali with her darlings, we’re at the dinner table talking about farts. Ahh, yes. The joys of being a mom to a 14 year-old boy! Wouldn’t trade it for anything in this world.

Madonna knows her ridiculous ramblings will be picked up by a publisher and perhaps a New York Times Best Seller when this is all said-and-done. In reality, right now as she types away and sips her tea, there are people losing their jobs and who do not know what the future holds for them. Some of these people are workers in her home state of Michigan. When the sickness passes, Madonna will hop on board a private jet back to the States. The damage will already be done as many airline pilots will be out-of-work. She and her clique will continue to polarize and politicize this virus as she frantically hammers at the keys on her typewriter in her elitist oblivion.

The main point here? It’s all Trump and the patriarchy’s fault she’s stuck in a luxury apartment in Paris rationing food and discussing Dali amongst the rose petals. Le Sigh. Nobody knows the troubles Madonna has seen.