Previous post
Denver: Giving Cash To Homeless Will Fix Everything

Next post
"Crime is a construct" & Other Leftist Delusions 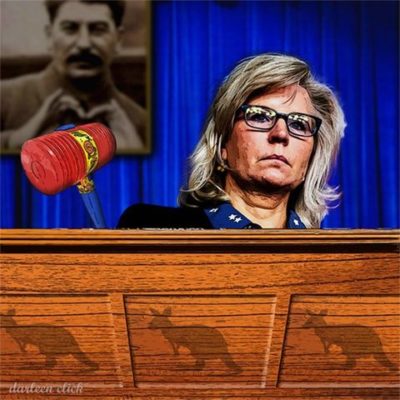 Liz Cheney, (R-Wyo) gave the give the annual Constitution Day Lecture for the American Enterprise Institute last night. In fact, Mediaite is calling the speech a “barn burner“.

The Republican, who ran her platform solely on January 6th and was endorsed by “real men” like Kevin Costner and (cough) Al Franken, had this to say at the AEI lecture last night:

Those who are protecting Donald Trump — elected leaders of my party — are now willing to condemn FBI agents, Department of Justice officials, and pretend that taking Top Secret SCI documents and keeping them in a desk drawer in an office in Mar-a-Lago, or in an unsecured location anywhere was somehow not a problem. They are attempting to excuse this behavior.

Bit by bit, excuse by excuse, we’re putting Donald Trump above the law. We are rendering indefensible conduct normal, legal and appropriate — as though he were a king.”-Liz Cheney

She is so brave. The election of 2020 was obviously won by President Biden, says the journalists at The Associated Press.

Along with Cheney’s damning accusations of Republicans protecting Trump, Liz has a revelation towards the end of her lecture:

I was in the Republican cloakroom. I was working on my remarks, I was supposed to speak that day and there were sheets of paper laid out on the desks. And I asked one of the staffers in the cloakroom, what are these sheets of paper?”-Liz Cheney

And as I was sitting there, a member came in and he signed his name on each one of the state’s sheets. And then he said under his breath, ‘The things we do for the Orange Jesus.’ And I thought, you know, you’re taking an act that is unconstitutional.”-Liz Cheney

King Orange Jesus is living rent-free in Cheney’s head. No names mentioned here, but some guy came in and muttered something under his breath about ‘Orange Jesus'”, says Liz as she looks around and whistles.

Time for her to name names

But she didn’t. She left ’em all hangin’ in the breeze.

She’s so ate up with Trump I’m surprised she can sleep at night. I’m fact I bet she’s missed a lot of sleep since she decided to throw her career away. She’s lost all credibility

In Liz Cheney’s mind, though, January 6th will happen “every four years” or something. Will that happen if you were to say get elected in 2024, Liz?

January 6th would not have happened if the radical left had not attacked first. These were not direct attacks. But they were blatant and they still are. There was impeachment, impeachment, impeachment. There was a politicized virus and a whole clown car of characters. There was the media, playing heavily to one side. There was the entertainment machine, also biased as hell. There was economic turmoil. Enterprise and production were at a standstill. Transportation at a grinding halt. Businesses shuttered. Supply chain: FUBAR. Then came the riots, crime, drug use on the streets. Then our elderly loved ones, in nursing homes, were left to die alone and in fear. Our kids were kept from an education, their classmates and much-needed social interaction. All of this on top of an election where we watched our current Commander-In-Chief do nothing in his basement with a baseless campaign. He dodged important questions while the media catered to him and when he was asked the important questions, he looked utterly confused.

But Biden got elected. He obviously won.

Republicans don't care. They haven't cared in decades; decades before Orange Jesus. That pocket Constitution they all carry around, that's a joke.

The truth is, there are those of us who care. Those of us who are tired of the constant baiting and polarization. Trump is no saint. He’s no Jesus. For most of us rational Conservatives, he’s not our Savior. He is not king. He may be a bit orange, even. But pointing to unconstitutional acts while other unconstitutional acts unfolded leading up to a tumultuous election is not winning any points, Liz.

So, tell us again, it was just Trump who posed a threat to our Constitution?

Our constitutional system has been defended and handed down to us by every generation since 1789. It comes to us with a duty of inheritance. It doesn’t belong to us. It belongs to our children and our grandchildren. And we must not be the generation that allows it to unravel.”-Liz Cheney

Bit by bit…excuse by excuse. All the fault of Orange Jesus. The things we do.

Drop a name or it didn’t happen, Liz.