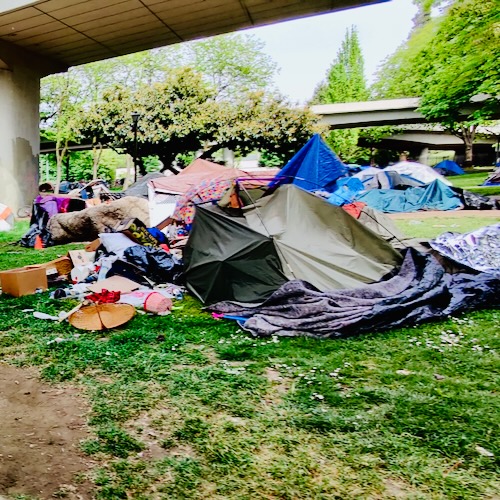 The city of Denver is set to roll out a new homeless plan. One that they “say” will get more of the homeless unhoused people off the streets.

To help ensure that episodes of homelessness are rare, brief and one-time occurrences, the City and County of Denver will soon provide cash assistance to more than 140 individuals experiencing homelessness. City Council today approved a contract to provide basic income to quickly and cost-effectively move people out of homelessness and back into housing.

The contract, announced in Mayor Michael B. Hancock’s State of the City address and led by the Department of Housing Stability (HOST), utilizes $2 million in American Rescue Plan Act (ARPA) funding to provide monthly cash assistance to more than 140 women, transgender and gender non-confirming individuals, and families in shelters.

“Just as important as housing and shelter is a regular source of income for those experiencing homelessness,” Mayor Hancock said. “This direct cash assistance will help more than 140 women and families currently in shelters move into stable housing, and provide support so they can stay housed, while opening space in our shelters to serve more people.”

Let’s stop and read through the above one more time. Currently, in Denver, there are an estimated 8,000 homeless. This plan will only “help” about 140 people. Moreover, that plan will only help those who are women, transgender, gender non-conforming, and certain families living in shelters. Only 140 people will magically receive $12,000.

All participants will also get a free cell phone and a year of service.

In addition, the Colorado Coalition for the Homeless will track how people use the money, as well as help participants get the things they need – such as furniture and kitchen supplies – and places to stay.

How does that get them off the streets? Rent in Denver, even for low-income housing is high. Even those who are homeless have to qualify and SPACE has to be available for them to be able to get an apartment to live in! Don’t get me started on getting even the basics of furniture, kitchen tools, supplies, bedding, towels, etc. And how about utilities?? Nowhere in this plan is there discussion of turning on utilities so they’d have water, sewer, and electricity! That $12000 will disappear in a hurry.

Don’t get me wrong, the homeless problem in Denver and along the Front Range is getting worse.

Yet, throwing money at key groups of people and then ‘studying’ the results for the next two years is supposed to fix this issue?

There’s three other very serious issues with how the city of Denver intends to solve the homeless problem.

The city is handing out $2 million directly to 140 homeless people who happen to be trans or nonbinary. A better use of this would be shelters that can help hundreds of homeless people – including men, who are the vast majority.https://t.co/CzZ3ygoAaR

Secondly, this discriminatory program is going to cause major problems among the homeless community. There will be jealousy and anger when those 140 people show up with all that cash. And believe me, suddenly walking around with that cash and a cell phone will make quite a few of those folks a target of others within the homeless community.

Third, handing that much cash to a person with mental health and drug issues could easily lead that person to go on a wild drug and/or alcohol fueled binge. And then, once again, that person is right back where they started.

We’ve been writing about the homeless issue for quite some time now. Cities such as Portland, San Francisco, Los Angeles, and Chicago are in such a disarray because of the homeless issues as well as the rampant crime. Yet they continue to throw money at the problem instead of trying to address the root causes.

Quite honestly, handing over cash with no additional guidance as to HOW that homeless person can land an apartment and find a job will once again cause yet another liberal program to fail. The same way the crack pipes and the homeless hotels programs failed.