Previous post
Refugees Are Important To The U.S. But So Is The Process

Klobuchar Drops Out, Will Endorse Biden

Next post
AB5 & Lyin' Lorena Wants Your Little Dog, Too

Klobuchar Drops Out, Will Endorse Biden 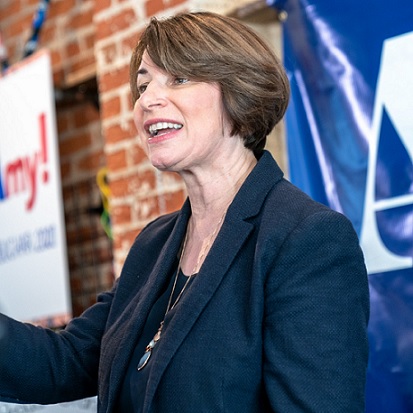 In the game of “last woman standing” between Amy Klobuchar and Elizabeth Warren, Klobuchar has blinked first.

The Minnesota senator has hung in the primary for a while, enjoying positive press and a few debate highlights. But now that her primary foil and target of loathing, Pete Buttigieg, is out, and a protest against her in her home state by Black Lives Matter, Klobuchar is calling it quits. And what’s more, she is throwing her support behind Biden.

Amy Klobuchar, a three-term senator from Minnesota, outlasted several better-known and better-funded Democrats, thanks to a third-place finish in New Hampshire. But she couldn't turn that into success elsewhere. https://t.co/VrY1XPE7KA

According to the Associated Press, Klobuchar will be onstage with Biden tonight in Texas, which is sure to make things interesting for Super Tuesday. Or will it?

Here's the weird thing: this could easily hurt Biden in delegate count on Super Tuesday, since she was competitive in MN and Biden wasn't, up until now, and she wasn't polling at 15% anywhere else. https://t.co/HZrwApdwWg

It is true that Klobuchar was only leading the polls in her home state of Minnesota, and had likely worn out her welcome in the race. Her few delegates might swing toward Biden with this announcement, but who knows? What is true is that Klobuchar now becomes a strong contender for a potential Biden vice presidental candidate.

But don’t blink now, because this is a game of musical chairs, and who ends up on the hot seat with the presidential candidate is definitely the one who can bring the most heft to a ticket.

One has to laugh at the hilarity of it all. Klobuchar and Buttigieg loathe each other, and that was clear from their interactions at the debates. Now they are both out of the presidential primary, but competing directly with each other AGAIN for the chance to be Biden’s vice president. And right now, Buttigieg has more delegates to offer Biden than Klobuchar does! This could turn into an epic battle between the two of them AGAIN. Maybe they should make this easier on themselves. The first one that has their last name mispronounced by Biden during a stump speech is out, and the other one gets to be vice president.

Meanwhile, the Sanders camp is beginning to sense the 2016 vibes approaching. The field is finally starting to consolidate around Bernie’s only viable rival, even if he can’t remember where he is most of the time. Super Tuesday is going to be a knock-down, drag-out fight between Bernie and Joe. Every single delegate counts now. If Warren drops out and throws her weight behind Bernie, this will get even more interesting. We’re going to see if the Democrats can stomach Biden for the good of the party, and watch the Bernie Bros freak out in Milwaukee and abandon the Democrats, or if Bernie manages to rally his “youth vote” and bring down a terrible vengance upon the Democrats.

Now would actually be the time for Barack Obama to step in for the ultimate impact. Endorsing his former VP right on the verge of Super Tuesday would knock the wind out of the Sanders campaign, and probably allow Biden some solid wins. It won’t happen, because Obama has no interest in supporting anyone but himself. Ol’ Joe will have to be happy with the phone call he got, and console himself with his newfound endorsements.