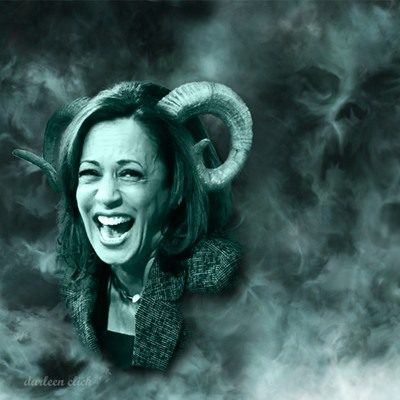 The above description of Kamala Harris may be too harsh for some. For us, we think this describes her to a T.

How anybody takes anything this woman says seriously is beyond me. Take this for example from this past weekend’s visit to Texas. Deep thoughts from Kamala on abortion:

I say this, one does not have to abandon their faith or their beliefs to agree that the government should not be making that decision for her. It’s literally that basic.”-Kamala Harris

It is not enough that we need to endure the word salads and the talk of “three-circled” Venn diagrams. Yes, Kamala said Venns have three circles. And she loves her Venn diagrams.

According to VP Harris, however, Christians who feel this way should put aside this opposition to abortion as a form of contraception. Why? Well, according to the world of Kamala (insert annoying nasally voice here), one does not have to abandon their faith and beliefs to jump on the abortion bandwagon. It’s literally that basic.

If we fail to apply the teachings of our faith to questions like immigration or Herschel Walker’s behavior or Donald Trump’s behavior in the way that she thinks we should, we wind up being scolded and encouraged to let our faith shape our moral and political decisions more aggressively.

But when it comes to questions like abortion, she is willing to offer instruction about how we should divorce our faith from our moral and political decisions. I choose to let the teachings of Jesus instruct me about how to apply my faith. I show respect for our Vice-President by praying for her and by loving her as my neighbor, and I show respect for the fellow human beings waiting for their chance to be born by opposing their slaughter in the abortionist’s chamber.”-Dr. Bart Barber, pastor of First Baptist Church

Speaking of immigration, did Kamala, who was so close to the border even visit the border while she was in Texas? (Cackle, cackle, laugh, laugh.) Why on earth would she do that?!

The literally basic thing about all of this is that in order to support abortion, one must abandon their faith. Kamala Harris, speaking at the University of Texas in Austin, knows this. And the university system as we know it would like nothing more than our young people to abandon their faith in God and place their faith in our leaders of the global world. As a parent who is touring college campuses with our son, I saw this first-hand last week at The University of Washington in Seattle.

“U-Dub” has four Ionic columns in Sylvan Grove. These pillars represent LIFE: Loyalty, Industry, Faith and Efficiency. The story is, undergrads touch a pillar that resonates with them in their first year and touch a pillar that resonates with them as they graduate. Our cute, perky tour guide told us about the pillars and said, and I quote, “some of these should be renamed because they’re outdated”. Judging from the pillars that resonated with her, our best guess of the ones she thought should be renamed were “Industry” and “Faith”.

The interesting part of this conversation was that she planned to touch “Loyalty” on the way out. The disconnect with these kids is real. How do you have loyalty without Faith? And who is this loyalty to? This loyalty is certainly not God if you drop Faith. Is it loyalty to political party or ideology?

Faith is not compromised. Faith is a foundation. And when you pull that foundation out or compromise it in any way, an evil, dark spirit takes over. Kamala Harris suggested this compromise in her visit to UT this past weekend. Do not let your government make decisions for you if they are on one particular side but, by all means, let Democratic government officials dictate when you can go out to a frat party or go to church on Sunday and when you need to stay home on lockdown. You see how that works?

Kamala Harris and her league of Democrats would like nothing more than young minds to compromise and drop their faith from LIFE completely. And when you drop Faith from LIFE, you are left with LIE. It’s literally THAT basic. Venn diagram that, Kamala, you tongue-tied moron, tone-deaf heathen.