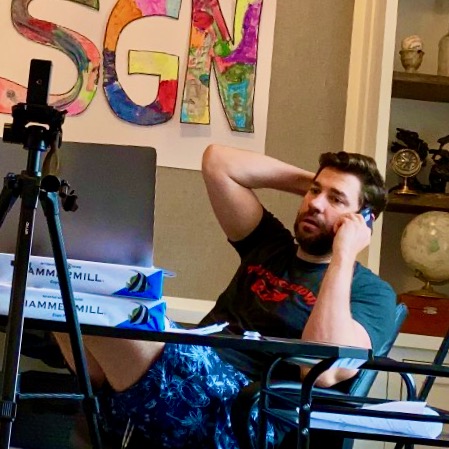 John Krasinski of “The Office” fame decided in this time of uncertainty that we need #SomeGoodNews. A few days ago he asked Twitter followers to give him examples of good news in their communities.

Alright everybody, how about #SomeGoodNews ! Send me the stories that have made you feel good this week or the things that just made you smile!

The response was overwhelming. Just reading through his Twitter feed made me smile, laugh, and get more than a bit teary-eyed. Thus the idea of broadcasting “SGN” was born.

“Dressed in a suit and tie with an “SGN” sign behind him that he said his daughters had made, he explained at the start of the video: “For years now, I’ve been wondering, why is there not a news show dedicated entirely to good news? Well, desperately seeking my fix somewhere else, I reached out to all of you this week, asking — nay, begging — for some good news. And boy, did you deliver. After reading those replies and the incredibly heartwarming stories that came with them, I thought, ‘All right. Enough is enough, world. Why not us? Why not now?’ So, ladies and gentleman, this is your fault, and this is SGN. I’m John Krasinski, and if it isn’t clear yet, I have absolutely no idea what I’m doing.”

Krasinki presented the show like a nightly newscast, complete with a stack of papers that he frequently shuffled and organized on the desk à la newcasters of yore as he turned to different camera angles.

“Without question, we are all going through an incredibly trying time, but through all the anxiety, all the confusion, all the isolation and all the Tiger King [Netflix’s much-discussed new series], somehow the human spirit found a way to break through and blow us all away.”

That’s the thing that, if we did nothing but watch the major news networks, we’d quickly forget. There IS good news all around us. While we do see the numbers of identified Coronavirus cases go up, we also need to remember the cases of those who successfully fought and won over this crappy Chinese virus. In Wyoming just over 1900 people have been tested and twenty seven have recovered. Across the United States nearly 6,000 people have recovered from this virus.

As Jodi pointed out this morning, Mike Lindell of My Pillow retooled his entire factory and will be able to make 50,000 masks A DAY to help in this fight. Brooks Brothers, Made-In-America, has retooled and is making masks as well. Nine Line Apparel is making masks, as is BenShot. How many local breweries and distilleries are making hand sanitizer? More than we know.

Quilters and sewers are churning out masks by the dozens, and people are flooding food banks so that those unable to afford groceries can feed their families. The stories abound. This is just one example in response to John Krasinski’s tweet.

And yes, quite a number of folks saw that and read it in Jim’s voice.

This is terrific news from Abbott Labs.

“The Food and Drug Administration on Friday gave Abbott Labs, an Illinois-based health-care products maker, emergency use authorization for its point-of-care test called ID NOW COVID-19 that it says can diagnose individuals with the virus in five minutes, the fastest such test available. Another molecular test from Abbott, m2000 RealTime SARS-CoV-2, received emergency use authorization just the week prior, and the company has shipped out 150,000 units.

This week, Abbott is ramping up production of the ID NOW nasal swab test to 50,000 units per day. Between the two tests, the company is looking to manufacture a total of 5 million per month as health officials try to slow the spread of the deadly disease.”

Even better is this news regarding the same.

BREAKING: Detroit will be one of the first U.S. cities to get rapid coronavirus testing machines from Abbott Labs (just recently approved by FDA). Detroit to get 5 machines, for 5,000 testing samples. Up and running within a week, Duggan says

So yes, there is indeed #SomeGoodNews to be found everywhere we look

Coco is an absolute doll!

Is this a one-time #SGN deal? Due to the responses, I’d bet another #SGN episode is in the works.

In the midst of all the bad and media fear-mongering we are given yet another reminder that good news is all around us and laughter is indeed the best medicine.