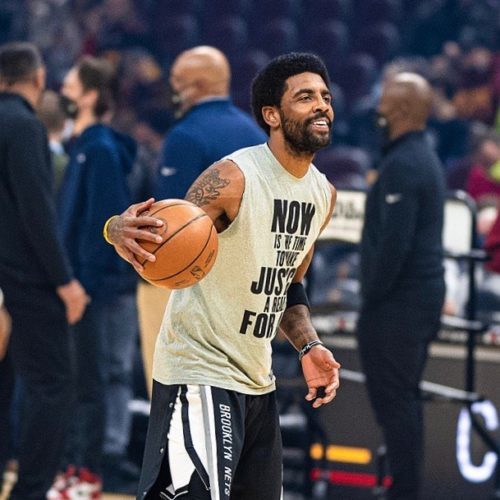 Brooklyn Nets Star, Kyrie Irving, had something to say on Twitter about vaccine mandates that sent some into a tailspin.

The comments were a reaction to New York City Mayor, Eric Adams’ decision to allow the city businesses to now implement their own vaccine policies and revoking a vaccine mandate for students participating in sports and some extracurricular activities.

At first, the lifting of this mandate was only for the special people:

Hallelujah! Employers can now make a choice. Kids can now play ball again! The restrictions have been lifted! Too bad the damage, for some, has already been done.

Irving, who is unvaccinated, made the following comments after hearing the news:

If I can work and be unvaccinated, then all of my brothers and sisters who are also unvaccinated should be able to do the same, without being discriminated against, vilified, or fired. This enforced Vaccine/Pandemic is one the biggest violations of HUMAN RIGHTS in history.”-Kyrie Irving

Kyrie Irving is no stranger to journalistic snark. Take this from WaPo‘s Sally Jenkins from September of last year:

Kyrie Irving is too smart for you. He’s so smart, he can outwit germs and governments. He’s so smart, you can’t understand a word he’s saying. That’s how smart he is. His genius is utterly indecipherable to you and me, and while you may wish for some insight into the exquisite, diamond-chip workings of his multifaceted mind, you are not entitled to them because he prefers to keep them ‘private.’

He’s a gentle philosopher king and a spiritual seeker who wants to leave a ‘service legacy on the Earth,’ he said. It isn’t only whimsical bluster; he has donated hundreds of thousands of dollars to the homeless and the hungry, to Native Americans and Black students, to social justice causes and international relief efforts. But he can’t seem to serve his own teammate LaMarcus Aldridge, who briefly retired last season with a heart condition, by getting a coronavirus jab.”-Sally Jenkins, The Washington Post

Spoken like a true, white liberal, no? Girl, you didn’t just call a black man stupid, did you? Why yes, I think you did, Sally.

Huh? Where and how did Kyrie Irving say this? And now, liberals are actually acknowledging the Holocaust was a real atrocity in our history? How convenient for them. Hey guys-n-gals-and-non-binary-pals…now do abortion.

Getting vaxxed during a pandemic is the same as needing a license to drive. You maintain your individual freedoms by mitigating the risk posed to the many. A small price to pay that history has taught very harsh lessons on. Just lucky covid isn’t a completely egregious virus.

So…COVID not being a “completely egregious virus” would be a solid argument for an individual to have a choice in getting or not getting the jab, wouldn’t it?

Do you believe you have the right to catch any diseases you want and spread them freely to everybody around you with no regard for anybody's health? You live in a society, not in your own little world where your actions don't affect others. Respect your community. Get vaccinated.

Oh, Stu. You must be the life of the party in all your six, layered Kn95s! Let’s take a stab. This guy breathes through his mouth only.

While I am far from shocked at the negative reactions to Kyrie Irving’s message, I am in a bit of disbelief regarding the many individuals who simply said “if you choose not to get the vaccine, you choose to lose your job”. It’s like some Americans have just resigned themselves to complacency and this being the world we live in. We’ve witnessed a world where the government can shut down our businesses, take away our livelihoods, cause a wedge in friendships and family relations (that are now irreparable in some cases) and mess with the minds of our children and our vulnerable elderly parents.

While this may not be on the scale of the holocaust or slavery, this is a violation. Watching untouchable, elite politicians, millionaires and celebrities posture and lecture while the folks in middle America struggled to make ends meet and tried to play by the rules-all while these elites did whatever the hell they wanted. We watched their kids go to school, their families attend parties, we’ve watched them hop on a jet and travel. Really, Americans? Have we forgotten already?

But Americans, now given the thumbs-up to be social again, will stand up for and “ooo-and-ahh” over Dr. Fauci at baseball games (I’ve seen it on social media). They’ll get the next OMICRON shot and call out sick for four days while their co-worker who did not get “boosted” does their work. Or, they will wait for the “better one” that drops in a few months like a new pair of Kyrie Nikes made in Chinese slave camps (and then call out for four days). They’ll wait six months for the booster, then 5, then 4, then 3, then 2…until they’re getting boosters every friggen month. “This is the new world we live in”, they’ll say and shrug their shoulders.

Kyrie Irving is far from the MAGA-anti-vaxxer the left likes to dunk on. He is a BLM supporter and bought a house for the family of the late George Floyd. But he’s also given to communities that were impacted by the Coronavirus pandemic. Why yes, Sally Jenkins, Kyrie Irving did give hundreds of thousands of dollars to the homeless and the hungry. Kyrie Irving did give to Native Americans and Black students, to social justice causes and international relief efforts. Too bad he’s a “vaccine ignoramus” and does not fit completely into their box.

Kyrie, also, last we checked, has a complete right to voice his opinion and to refuse the vaccine as an American. That’s not cool in their playbook, though. Even as some of Kyrie Irving’s ideas on social justice align with theirs, he is still a bad person for refusing to bow at the alter of Fauci-a man who openly mocked Americans in the pandemic.

Irving is not entirely wrong here when he utters the words “human rights violations”.