Next post
NY Times Advocates For Censorship On Election Night 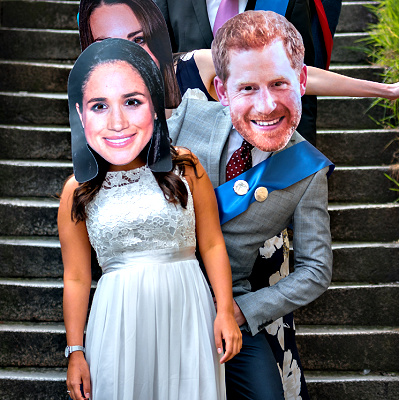 by Toni Williams in People 9 Comments

Will no one rid us of these tiresome royals? I know you are thinking about the debate tonight and wondering what Orange Man Bad scandal will the failing New York Times dream up for Thursday. You are wondering why on Earth is Toni writing about the Sussexes when so much is on the line? It’s simple. While it may be laughable, Meghan Markle has political aspirations here in the United States. Go ahead and laugh, but it’s true. Harry has become nothing but an uncomfortable looking prop for Markle.

Remember when Harry and Meghan declared that they wanted a life of peace without media scrutiny and that’s why they dumped the Royal Life for Canada and then California. The Royal Family retainers carefully negotiated the Megxit and laid out rules for the two. Like Meghan has respected rules at all.

Anyone who thought this marriage was gonna work raise your hand. Okay, Portland, you don’t count. The minute Harry put a ring on her hand, Meghan snapped one through Harry’s nose. She started kvetching about the rules immediately. They married on May 19, 2018 and by January, 2020, Meghan had broken the rules 67 times. Unless they are performing royal duties, the Royal Family likes to fly under the radar, so as to not embarrass the Queen. Not Meghan. Once she became pregnant, Markle was nicknamed “Baby Bump Barbie” because of her constant posing while cradling her baby bump. She needs constant attention.

Page Six is claiming that Meghan and Harry doing a get out the vote video allegedly violates the rules of the deal for Megxit:

The Duke and Duchess of Sussex irked the other royals when they called on American voters last week to “reject hate speech, misinformation and online negativity” in “the most important election of our lifetime,” the Sunday Times reported.

Royals are supposed to remain politically neutral and the pair had pledged when they resigned from the family that “everything they do will uphold the values of Her Majesty,” the outlet reported.

Here is the ad:

Crybaby Harry can’t vote in the United States and didn’t have a vote in Merry Old England. Whaaaaa! That’s because you are a member of the Royal Family, duh.

But, Meghan’s aspirations go higher that urging Americans to vote. Naw, girlfriend has aspirations to be President of the United States. Pick up your jaw off the floor. Again, from Page Six:

After the Duchess of Sussex and husband Prince Harry dumped royal duties with their historic Megxit this year, the 39-year-old former “Suits” star now has her eye on the White House, a close friend told Vanity Fair.

“One of the reasons she was so keen not to give up her American citizenship was so she had the option to go into politics,” the unidentified friend told the mag.

“I think if Meghan and Harry ever gave up their titles she would seriously consider running for president,” the friend added of rumors of a 2024 run.

Meghan even did an interview with that aging, irrelevant harridan, Gloria Steinem. Here is a snippet from Vogue:

Their full conversation is still to come, but in the preview clip, the two women discuss the importance of voting as a deeply divided US hurtles towards a presidential election in November. “People forget how hard women like you and so many others before you fought for us to just be where we are right now,” the Duchess tells Steinem, whose efforts to get the Equal Rights Amendment ratified in the US recently became the subject of the Emmy-nominated TV show, Mrs America. “If you don’t vote, you don’t exist,” Steinem replies. “It’s the only place where we’re all equal, the voting booth.”

First of all, the ick factor of the tongue baths is high here. And, the voting booth is not the only place where we are all equal. Women are everywhere doing everything, but Gloria is still stuck in her glory days.

Queen Elizabeth, dear, please come and get Harry. Take your grandson home to England. Put him back in uniform which seems to be where he was happiest. You can leave Meghan. Once she doesn’t have the cachet of the Royal Family, she will go back to be a C actress and yacht girl.