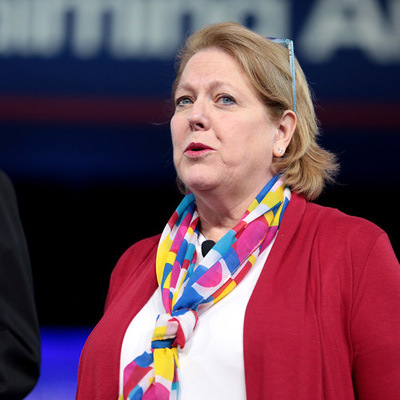 The January 6 Committee finally landed the “Big Tuna,” as they say in Chicago: they’ll get to interview Ginni Thomas, wife of Justice Clarence Thomas. Media and the Twitter mob are licking their chops, hoping that her comments will be the smoking gun to blow the Trump insurrection conspiracy wide open.

Deets on the Ginni Thomas Interview

According to her attorney, Mark Paoletta, Ginni Thomas is ready to speak to the committee in this voluntary interview:

“As she has said from the outset, Mrs. Thomas is eager to answer the Committee’s questions to clear up any misconceptions about her work relating to the 2020 election. She looks forward to that opportunity.”

The committee is eager to hear Thomas explain those emails she exchanged with Mark Meadows, former President Trump’s Chief of Staff. She had urged him to continue challenging the outcome of the 2020 election. She had also encouraged lawmakers in other states to continue fighting the election results.

But what the committee really want to hear is about her dealings with John Eastman, the lawyer who pressed VP Mike Pence to block or delay the certification of the electoral votes. Of course it’s the leaders, Reps. Bennie Thompson and Liz Cheney who really want to get their mitts on that scoop. They wrote in a letter:

“We are specifically investigating the activities of President Trump, John Eastman and others as they relate to the Constitution and certain other laws, including the Electoral Count Act, that set out the required process for the election and inauguration of the president. The select committee has obtained evidence that John Eastman worked to develop alternate slates of electors to stop the electoral count on Jan. 6.”

So far the panel has at least one email between Ginni Thomas and John Eastman. But attorney Paoletta says there’s nothing there, there, just as he wrote in a letter to the panel in June. “There is no story to uncover here,” he wrote.

But if Ginni Thomas didn’t agree to appear before the Committee, Liz Cheney had threatened to subpoena her. Ve haff vays to make you talk.

The Left Goes Into Ecstatics

Upon the news that Ginni Thomas agreed to an interview with the Jan 6 Committee, progressives practically wet themselves with excitement.

The HuffPost found some Twitter blue checks rubbing their hands in anticipation of the Thomas interview. Of course they only found the people that wanted to string her up or something:

“The news understandably aroused the interest of Twitter users, many of whom predicted how her testimony might go.”

Let’s see how candid she is. https://t.co/8ine8igzIY

They found a Biden 2020 adman who says that, hell, we should just lock her up like the traitor she is.

Ridiculous any *agreement* was necessary w this traitor. Drag her in or put her in prison like they did Susan McDougal. W that said, hoping she'll stupidly give some things away bc she's, well, a clown https://t.co/yL3xOGErNd

Then there was Wajahat Ali of the Daily Beast, who’s been clamoring for an investigation since early this month.

But I don’t think he likes her very much. Ali called her the “traitorous wife of an extremist Supreme Court justice” who was part of an “ongoing right-wing coup against the United States.”

Gee, Ali, what do you really think?

Not only that, but Ali also accuses Clarence Thomas of knowing about his wife’s participation in the “coup:”

“Her husband, Justice Thomas, just happened to be the sole dissenting vote in a ruling that ordered Trump to turn over his documents to the Jan. 6 Committee. In light of all these revelations, it’s now reasonable to conclude Justice Thomas knew the documents might expose his wife’s deep involvement in the coup attempt.”

How many smoking guns do you need? Throw them both in the clink!

On top of all that, a self-described “cult expert” has posted an interview he held with Ginni Thomas in 1989, after she left a group called “Lifespring.”

I knew Ginni Thomas. Ginni Thomas was in a cult (the large group awareness training cult, Lifespring). Here she is in 1989 speaking at an event I hosted for former members. Until today, almost NO one has seen this video. pic.twitter.com/qMX4fKboxg

Well, you know what that means, don’t you? It means that Ginni Thomas is susceptible to belonging to a cult, like, you know, the Cult of Trump. And it was all because her deprogrammers were conservatives!

“Sadly, the people who helped deprogram Ginni were also apparently involved in right-wing causes. As is the case with SO many former members, she was overly susceptible and went from one cult to another (The Cult of Trump).”

How professional is Steven Hassan, PhD, that “renowned expert on cults & undue influence, mental health professional, author & teacher”? Posting this video may not violate any HIPAA laws, but it sure smells of unprofessional behavior by exposing Ginni Thomas’s past experience with a cult, and by declaring her to be “susceptible.”

This Will Be a NothingBurger

Will Ginni Thomas collapse like a wet noodle before the threatening glare of Liz Cheney, the wannabe Trump slayer?

Don’t bet on it. Not only has Mrs. Thomas dealt with leaving a cult, she also had to endure the 1991 Supreme Court confirmation hearings, in which her husband was accused of sexual harassment. When Democrat senators put Clarence Thomas — and, by extension, Ginni — through a “high tech lynching” for being an “uppity black” who dared to be a conservative of color.

I think Ginni Thomas is made of tougher stuff than what Liz Cheney and her cronies are expecting.