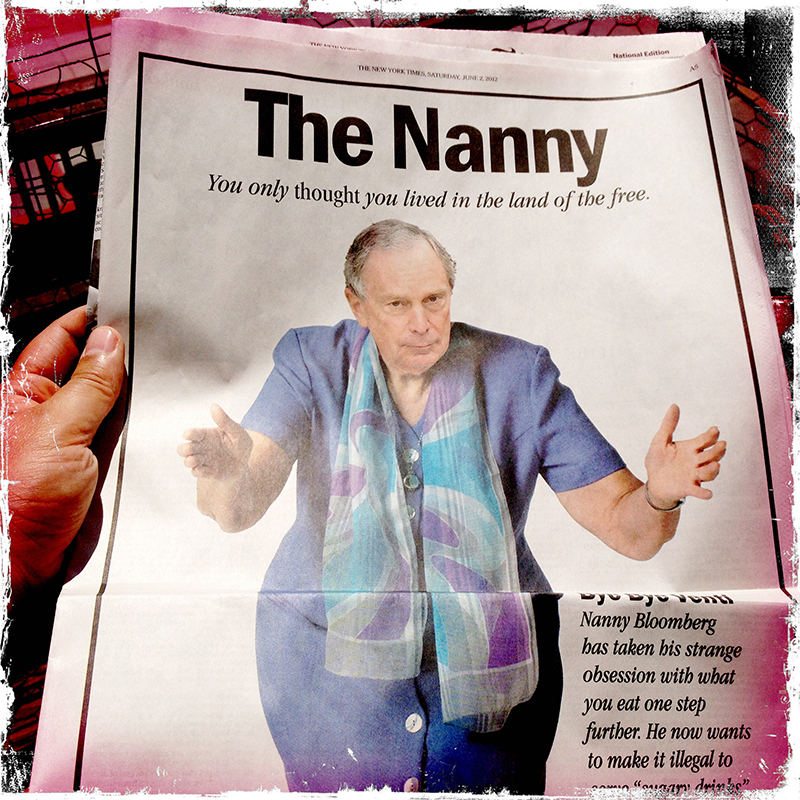 First it was his blatant, and obviously political, about-face on stop and frisk during his tenure as New York mayor. Then it was his belittling of America’s farmers and ranchers as mentally inferior. Then it was a mountain of cringe-worthy comments he’s allegedly made to various people. Then it was his comments about denying healthcare to the aged. And now a video has emerged showing Mike Bloomberg insulting the intelligence, and questioning the competence, of young men of color:

Bloomberg says many 'black and Latino males' don't 'know how to find jobs,’ & ‘don’t know how to behave in the workplace,' in newly uncovered 2011 video

Is it any wonder this guy likes Hillary “Superpredators” Clinton? He’s everything President Trump is painted as.

Now, I don’t doubt that a lot of young black and Latino men are indeed clueless about how to find a job and how to behave once they’ve found one.

That said, why does Mr. Bloomberg single out young black and brown men for what he says is a lack of ability? I can tell you firsthand that there are plenty of pasty-skinned people like myself, from both genders, who are clueless about how to hop into the job market and behave in an appropriate manner once they get there. I mean, when you’re rewarded with a hot mic by Comrade Bern for behaving like this…

…is it any wonder potential employers might toss your resume into the circular file, and light it on fire with a blowtorch?

By the way: thanks, Joaquin Phoenix.

Which brings me to this: Following a question I asked Sunday afternoon on my FaceBook page about whether or not black and brown voters get sick and tired of the left’s incessant pandering every election cycle, a brief conversation ensued with a now-former Facebook friend (he vanished) who just so happens to be of Mexican descent. He asked if I knew, and associated with, anyone with more melanin in their skin than I, a comment I found highly insulting and, on its face, racist. Yes, I said it. His comment was racist. Why? Because he made a (false) assumption about me based solely on my skin color. I grew up in Southern California, ok? ‘Nuff said. But I wasn’t about to drag all of my childhood friends into the conversation to prove my worthiness, which I’m guessing is what he wanted me to do. My friends are my friends; I don’t place them into neat little boxes of “tokens” based on race, gender, or ethnicity.

And that’s what Mr. Bloomberg seems to be doing here. His comments aren’t wrong—our public schools generally fail to prepare our kids for successful adulthood regardless of how much money we sink into them—but rather than just discuss the difficulties many young people have when entering the job market in general (I was that person), he’s displaying his stereotypical condescending-white-liberal with a God complex self who views black and brown voters as 1) a mindless, monolithic voting bloc, and 2) in need of assistance from elitist, condescending liberal phonies like him (remember: per our liberal betters, voter ID is racist because people of color aren’t competent enough to attain IDs). Also see Biden, Buttigieg, and just about all of the rest of the “diverse” field of Democratic candidates with fancy pedigrees and multiple homes who too work every day trying to convince minority voters that their salvation lies not with themselves, but with the Democratic party.

They do now as a result of Trump’s economy

Or…perhaps Mike’s been too busy looking down his nose at us from his ivory towers rather than hangin’ with the peeps at The Daytona 500:

The words “Hunter” and “Biden” come to mind.

Now, I’m not so naïve as to think that this sudden onslaught of clips featuring Mr. Bloomberg displaying his arrogant, bigoted, know-it-all self are a coincidence. Biden is drowning in the shallow end of the pool and Bloomie’s nipping at Bernie’s ankles as they Hoveround toward Nevada. So it’s no surprise that Mikey’s getting opp-researched upside the head.

But the most disturbing, and damaging, thing Mayor Sixteen Ounces is engaging in isn’t even his nationwide gun-grabbing attempts; it’s his commodification of the presidency. As explained by Steve Berman of The Resurgent:

While Trump spent decades building his name, Bloomberg has spend [sic] decades honing his craft of targeted spending to win political influence and power. This has manifested itself in Democrats who did their level best to keep billionaires out of politics to now hail Bloomberg and his billions as a hero to save them from the desolation of Sanders’ socialist nightmare.

A Bloomberg presidency itself might not be a terrible time for conservatives (bad, but not terrible), but Bloomberg winning would be terribly damaging to our nation. No man should be able to engineer a White House takeover through spending and Machiavellian intrigue. No-one should be able to buy the presidency, and that’s exactly what Bloomberg has in mind.

Bloomberg must not win, literally at all costs. I’ll take four more years of Trump standing on my head to prevent it.”

So to Nanny Gungrabber I say: our White House is not for sale. Not to you. And not to the most corrupt career politician in America who’d be nothing without her husband’s surname. So here’s hoping your billions blow up in your snobbish face like a shaken-up Big Gulp. And if you are the Democratic Party’s nominee—those would be the same people who say they abhor out-of-touch billionaire elitists like you—I hope President Donald “Irredeemable Deplorables” Trump whips you like a proverbial mule, you know, like the ones whose owners you so thoughtlessly insult.